Copdog, M.D.: The Greatest TV Show Ever (on CBS)

Prepare to have your mind blown by a dog who does it all, and more.

This fall on CBS three television writing legends are collaborating to create what is said to be simply the greatest show possible. A show that will not be put up for Emmy awards, but for Oscars, and somehow Grammys as well. Edmurd Hubernickel (head writer for House, Sammy Davis, Sr. (head writer for Law and Order—which one? All of them), and Laura Juniper (head writer for Animal Planet's Dogs 101) have come together to create the series that will inevitably define us as a species. Should there be an intergalactic federation of some sort that is observing our humanity, and they are unsure whether or not we should be exterminated as a race, this show will certainly prove us to be creatures worthy of living.

The writers shuddered to even name this show, expressing specifically that they did not want to limit the show's title to the mere confines of the written word. However, they were not completely opposed to using words to make the title if some sort of greater language was discovered—something with roughly 80 times the awesomeness and 2.5 times the kick ass factor of the world's greatest language (probably some sort of Nordic language, thanks to the Swedish Chef).

Anyone who dares say anything negative about Copdog, M.D. is the same type of person who beats up homeless people and ravages married women. "There are no words in any language currently known to man that could adequately convey the spectacularity of what we have done here, babe," said Sammy Davis, Sr, "or so we thought at first. So our original idea for the title was gold. Not the word, but actual bars of solid gold bullion, broadcasted via Willy Wonkian technology at the opening of each show. When I was informed that this technology didn't exist, and that Mike Teavee didn't really get shrunk down to an itty bitty manchild excited that he was finally on the TV…well, I went into a hellish catatonic state for the remainder of the week. Then, when I broke out of the insanity of being trapped in a cycle of a million vivid repeating nightmares, it came to me, finally, a name worthy of our show. Two months later when I finally stopped screaming, I gave the world the gift that I cooked up in the monkey pot." (Sammy Davis, Sr. frequently refers to his head as the monkey pot.)

Old folks, get ready to cover your ears, because hearing a title of this magnitude could cause a stroke (strike that, WILL cause a stroke). The rest of you this should probably brace for violent orgasm:

Oh my god, just saying that name makes me feel like I did a bump of cocaine. 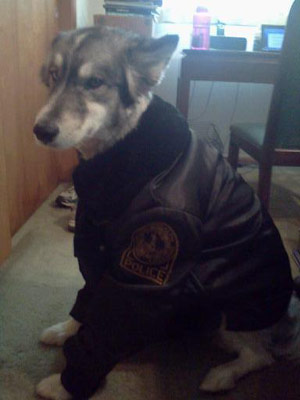 "I eat paperwork for breakfast."I want to congratulate you on even reading an article about something this great. Imagine if you can, a wolf-husky hybrid with different colored eyes (awesome already, right?). He is one of the lead detectives in his state for murder investigation ("what state?" you ask? Well, what state do you live in? There's your answer), and he also moonlights as one of the top diagnosticians in the nation. He only does house calls and has a top notch medical team to back him up.

Okay, calm down and take a deep breath. I know you wanted to see this show five minutes ago and are presently considering taking hostages to barter for a viewing of the pilot, and honestly I can't even tell you not to do this; if I were in your shoes I would undoubtedly do the same.

According to Edmurd Hubernickel, "Since this show will be perfect in every way, our hope is that God himself will drop down to try and improve on it, and ideally, after much scrutiny, he will end up shaking his head and saying, ‘Nevermind, I guess you got this. Cool then, later guys.' Then he'll walk away awkwardly, occasionally stealing a glance back. Keeping that in mind, we do want to be realistic about this project. We have faced the reality that there will be critics waiting to pounce on this to make a name for themselves. There's haters everywhere, and that's fine—they have to hate (at least that's my understanding)—even though all we're ultimately trying to do here is serve you nasty boring little nobody's a little slice of sunshine so that your entire day isn't the generic blur of sadness and misery it usually would be. Our main goal here is to provide you with a temporary relief from the nightmare you call your life. Heroin does that and look how popular it is! Now, in dealing with those who criticize this miracle we've created, we feel that anyone who dares to say anything even slightly negative about Copdog, M.D. is the same type of person who plants bombs in black churches to murder innocent little children; the same type of people featured in the beginning of A Time to Kill; the very same type of person who beats up homeless people and ravages married women, forcing their husbands to watch while providing a disturbing rendition of ‘Singing in the Rain." In short, the type of person who makes Jeffrey Dahmer look like Gandhi. We recommend you dispose of these useless hunks of tissue and bone as soon as they pop their heads out, before they can do more harm to mankind."

Dr. Copdog is the best in the biz, of course. But having such an immense source of brilliance and savvy as Dr. Copdog is not without its drawbacks. Dr. Copdog has collected his fair share of enemies along the way (anyone who is the best at what they do tends to draw their fair share of haters, far be it for Dr. Copdog to be an exception). For example Sergeant Mozart (the famous Mozart from the past, who time traveled to the future to fulfill his secret dream of law enforcement in the 21st century) is always reprimanding Dr. Copdog for his questionable methods and vulgar candor.

Dr. Copdog is clean as a whistle, but Scruff McGruff would have you believe otherwise. The anti-crime mascot got fed up with his lack of impact on crime, gave up, and began selling crack, but only to pay for his private cocaine addiction. Dr. Copdog arrests him and asks him why he isn't against crime anymore. Scruff laughs and lights up a Marlboro in the holding cell, shakes his head, and looks up at Dr. Copdog smiling: "The only thing I ever took a bite out of was my dumb useless dog dick, and that's all you're doing right now. You don't actually think you're cutting down on crime do you? There's already some young pup on the corner where you arrested me, selling rock, or at least ganj in my place. Go look." And sure enough we see a puppy on the corner with a baggy hanging from its mouth.

Scruff skips out on bail and does everything to try and frame Dr. Copdog, planting drugs in his car, building a meth lab in his basement, even putting acid in his cheese omelette (luckily Dr. Copdog can smell LSD and Scruff's plot is foiled). But Dr. Copdog is too clean for all of that, and as much as Sgt. Mozart wants to cuff him for it, he knows better. Sgt. Mozart wants to book him legitimately, and warns Dr. Copdog of this. He lets him know that his rough and tumble, rogue tactics won't be tolerated. He tells him to get out before he writes a requiem for him. At that Dr. Copdog runs off with one of his big breasted girlfriends for a passionate lovefest in the Grand Canyon; it's the only place big enough to safely contain the explosive energy of his libido.

His pet projects include hunting down organizations that you would not expect to be running scams, harshly interrogating their employees ‘til he gets the scoop, then taking them down. He soon finds that the Susan G. Komen Foundation has been using donations not to fight breast cancer, but instead to provide implants for flat-chested girls who qualify for a status bump to "really hot" with a big rack. He also finds that funding for PBS is not provided for by viewers like you, but rather by viewers more like that guy, over there, the one with the hat, who's not you, or anything like you for that matter.

Watch out for the cliffhanger, where Dr. Copdog answers a house call and is tricked (by Scruff McGruff and his new sidekick, Wilson from Castaway) into inadvertently killing one of his patients. The next day where should he be paged to but the very crime scene he created… bum bum bummmmm.

Related
Sometimes I Think About My Childhood Best Friend and Wonder “Whatever Happened to That Guy?”
Anthony Scibelli
It’s Not Every Day That I, A 65-Year-Old General Contractor Named Gary, Get Mistaken for Cameron Diaz, But I’m Gonna Roll with It
Stefan Sirucek
Well, Stranger, It Seems This Town Ain’t Big Enough for the Both of Us, on Account of My Torso Mysteriously Growing Larger Every Time I Say the Word “Ain’t&#...
Spencer Roth-Rose
Resources