I joined the police in 1987 hoping they would provide me with a weapon I could use to kill my ex-wife's dog. It turned out, though, that I was natural police. I had to take a few tests, but most were a total breeze—and, fortunately, the police have a policy so that if you fail the drug test 20 times they just let you in anyway.

I remember my first real introduction to the work, which was through my superior officer on my first day; he said something like, “In six months I'll be retiring; don't fuck up, or I'll fuck you up.” And that was really all the inspiration I required. I took to the streets dressed in blue for the first time and fully realized what a true sense of freedom it is to be able to hit anybody you like in the skull with a nightstick.

I used to beat people into pulps, but I did it with the utmost sincerity from my heart and soul.The early days were by far the most exciting. I was learning new things every day, like police slang: bracelets means handcuffs, paperwork means donuts, and the N-word means suspects; it was a whole new glorious world, a world that before had been forever distant behind television and movie screens in my pre-police life. Anybody who wasn't a cop was a fucking chump. We were like a street gang, with our own colors, talk, and codes—but with government funding. It was beautiful. And people always go on with that “who watches the watchmen” crap, but I say fuck that, nobody asks who fishes the fishermen, or who fires the firemen, or who drills the mandrills. When you're guarding a society, you're a cretin if you don't take a few liberties—at least it seems that way, when you're looking at it from the perspective I am.

Another thing people don't understand is that back in the booming 80's things were different. A yuppie culture had swept the nation and being greedy and physically fit was all the rage. I for one was pumped full of so many steroids that my testicles were rubbing against my heart, and my rage was becoming so uncontrollable that when I got angry I had to be tranquilized and kept in isolation. 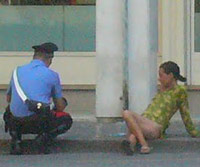 Free sex was as easy as finding a condom in a prostitute's purse—literally.But that was life back then. And police work, just like everything else, was also different from what it is today—there were no DNA experts or computer geniuses in the force for a start, and, mostly, prosecution would consist of picking the Mexican guy out of a lineup and having him executed. And the restrictions on searching were so lenient that I could have what most would call a truly gratifying sexual experience with any woman I found on the street, providing I told her she fitted the description of a crazed bag snatcher. I had a lot of good experiences in those days, like driving through gay pride marches at 140mph, taking bribes from aristocrats and then arresting them anyway, and making prisoners read the entire Old Testament aloud at gunpoint. Yeah, those were the days… but then came the 90's.

The 90's. Ah yes. There was a new surge of drugs and prostitution in the 90's that made getting hold of supplies for police parties that much easier. And soon I rose to the top. People always question how a man who once, caught up in the dark depths of his own soul, dug up Marilyn Monroe's corpse in the search for evidence on JFK's killer could rise to the top of a major police department; the simple truth is, I blew so many whistles and ratted on so many of my partners that they had to design a special medal for it, a medal that's actually named after me: “The Hubert Warren Medal for Severely Detrimental Teamwork in Aid of Long-Term Organizational Benefit.”

But being at the top has changed my perspective of the police force as a social construction, because being at the top crust allows me a better view of the people at the bottom crust of the next pie—the next pie being politics. Working regularly with politicians has changed my entire worldview; their shared lack of any kind of moral code is truly admirable… I mean, I used to beat people into pulps, but I did it with the utmost sincerity from my heart and soul—these politicians would have the moon missiled out of the sky if they felt it would help their careers.

It's this exact innovative lack of ethics that I've learned a lot from, and in playing the game I myself have gained authority. Recently I've placed forward an act regarding arrest procedure within the police; if agreed upon when brought up in front of counselors, this act will give police officers the right to remain silent when making arrests, an act which should and will increase the amount of successful arrests in my district, and, if successful, police stations all over the world.

But occasionally I still miss the old days when I was young and angry and sexually confused, hitting the streets with a can of pepper spray, some knuckle dusters, and a copy of Tess of the D'Urbervilles by Thomas Hardy; driving through empty cardboard boxes when in car chases with pimps; speaking to hip, jive-talking informants, prowling the streets for bums to tazer at four in the morning… yeah, those were the days—the glory days.

Anyway, I've always said there were only two reasons people ever joined the police force:

I've always liked to think of myself as a mixture of the two, a truly well-rounded policeman, which possibly accounts for my success within the force.

Yes, well, the conclusion. I suppose to finalize what I've been saying, I should talk about how I see the police. The police are like rain—a heavy rain—a rain that helps crops grow, helps soil fertilize, helps the desert cool, and does good for the world; at the same time, the rain causes floods, it rises and fills lungs, killing plants, humans and animals, it irritates most people when it rains, and serves a purpose that on the whole seems fairly pointless, and often destructive. The point I'm trying to make is that the police do good, but to take that good, you have to take the bad. You can't have your cake and eat it too—or, more fittingly, you can't be helped by us after your house has been burgled and then complain when we're throwing you into a cell for no apparent reason, because they come together.

Society fucking needs us, and, more importantly, we need society. Think of us as leeches on the sides of your precious towns, cities, and countries, just sucking away—we suck out the cancer, but we take a lot of blood with it (and subsequently leave a lot of cancer around, too). Really it doesn't matter, because we'll be here whether you like it or not, despite the fact that modern policing really only requires us to enter the public domain when we need to scrape DNA from somebody's genitals.