How to Convince People to Join Your Political Party, Through Home Decoration

Republican, Socialist, or Tea Party, there's a persuasive design scheme for that.

If you're probably like me, then you probably like looking at politics. The sound of words like "congress" and "oil" intrigue you. ("What do they mean?") The idea of wearing a suit is something you've often thought about thinking about. ("Maybe I might get a job one day if I have time?") And, most importantly, you appreciate the way politics' nice firm bottom looks in a pair of high-waisted Levi's 501 jeans, while you're waiting in line for waffle fries at Six Flags.

But you're also frustrated, I think. You want to engage with politics, but it doesn't connect with you or look at your Tumblr page after you post an insanely funny GIF.

Totalitarian Party: Choose any decoration scheme you like. Enforce said scheme on all other houses in the neighborhood through violence.During my first seven years of undergraduate study in English, I was this frustrated person, too. Always wanting to engage with politics, wanting to touch politics or sit on its lap, but not exactly sure if that meant that I'd have to pay extra money.

Really, it was youthful naiveté. Connecting with politics is all about bringing it down to your level—something that you understand.

For me, that level has always been home decoration. In my eighth year of undergraduate study, I did something that completely altered my life direction: I added a minor in home decoration (much to the conservative chagrin of my advisor). However, combining my expertise of the English language with a love of home decoration actually gave me an appreciation for space and how that space defines our approaches to the world.

I added a new wrench to my critical thinking tool belt!

Here's a thought: if you want politics, then you have to be politics. Pretty difficult, I bet. Well, think about this. What would you do if you were a member of the Objectivist Party and owned a dog? Easy: you would eat the dog's food because it is your happiness (not the dog's) that is most important to you. The dog can't make its own food? Then it's going to die. Too bad, dog. That's what you get for being a drain on my individual rights. You also eat your own fecal matter, too.

That's what it means to take politics personally.

You don't just want a bumper sticker or a lapel pin to be the defining characteristic of your politics, do you? NO. You want something that really kicks society in the testicles. Something that forces people to acknowledge that, like it or not, this is who I am. I am politics.

It doesn't matter what kind of politics you are, this advice is golden. Some people don't want to listen. Like your dad. He doesn't care. He just wants you to get a job and finish school. But what does he know? What the hell do white socks that go all the way up to the knee say about anything?! Nobody cares about your Corvette!

At some point, an election's going to happen. Nobody's sure when because they never tell us exactly when they're going to occur. But when this election happens, you'll want everybody you can get on your side. So you'll probably want to throw a party. What are people going to think when they come to your house? That you stick by your beliefs and act them out in every facet of your life? Or that you're an asshole like my dad?

Hopefully not the latter. And that's why, drawing from my background in home decoration and critical thinking, I have compiled a shortlist of all the major political parties in the United States (according to the most updated list on Wikipedia) and how to decorate your home to convince everyone at your next (dinner) party to subscribe to the beliefs of whichever one you choose. 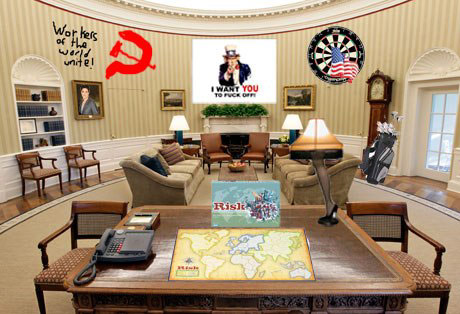 Hang pictures of Ronald Reagan wherever there is space. Greet visitors with a large marble nude of Thomas Jefferson when they first enter your home.

Nothing should be bigger than other thing in your house. Ensure all of your chairs, tables, walls, pictures, and couches are the same size. Make sure that books are the same size as your bookshelves. After all, where would those shelves be without the blood, sweat, and tears of those hardworking books?

Save on risky household improvements by decorating over peeling wallpaper, leaking pipes, or faulty electrical wiring. Worried about winter parties? One hundred dollar bills make great kindling paper and are sure to be a kickass fire- and conversation-starter for any occasion at risk of being ruined by the cold!

Choose any decoration scheme that you like. Enforce said scheme on all other houses in the neighborhood through violence.

Hang pictures of Glenn Beck wherever there is space. Include chalkboards with the words "Communism" and "Freedom" to create a comfortable atmosphere. Greet visitors with a large marble nude of the Constitution when they first enter your home.

Maintain absolute decorating indecisiveness. Keep all decorative items in unlabeled boxes in the basement or attic and never speak of them again.

Set the entire house on fire.

My hope is not only that this article helps clear up some gray area, but that it also reveals my devotion to politics.

Related
New Trolley Problems for Our New Political World
Robert McGee
Advice for Dealing with the Stranger (Nicolas Cage?) Living in Your Walls
Doug Kolic
We Need to Talk About Your Behavior at Our “Eyes Wide Shut” Parties
Nathan Pensky
Please Hire Me to Be Your Gatsby Party’s Nick Carraway
Sara Costello
Resources