5 Mind-Bending Pieces of Art That Will Make You All Like, "What the Fuck is Going On Here?"

The kind of artwork that will make your brain print out error messages.

I collect weird pictures from the internet. That statement surprised exactly zero of you I'm sure. But while most of you probably think that by “weird pictures” I mean “simple, unassuming stuff like Wizard Pornography and My Little Pony-themed Zoomorphs,” and while I won’t act like that stuff doesn't occupy a quite honestly troubling amount of my hard drive space, it's not the subject of this article. Because my editor is a coward and won’t let me tackle the real issues on Points in Case.

One of my favorite categories of pictures is art. I know, I'm so classy. But a particular kind of art. The kind that makes your brain print out error messages when you look at it. The kind where it seems more or less impossible, but someone up and made it happen anyway, because some people never stop in their impressive quest to make me feel like shit for not getting anything done today.

If you’ve ever looked at a picture or painting and thought to yourself “Well now, that just can’t be right….” and then trailed off in thought with your head cocked to the side, then this article is for you. Or, if you hate the very concept of art, and the passing notion of a paintbrush gives you the anger-quakes, then go ahead and read it anyway, because I make some really good references to genitals, and I need the page views anyway.

1. “Coming to a Complete Stop” by Gregory Thielkor 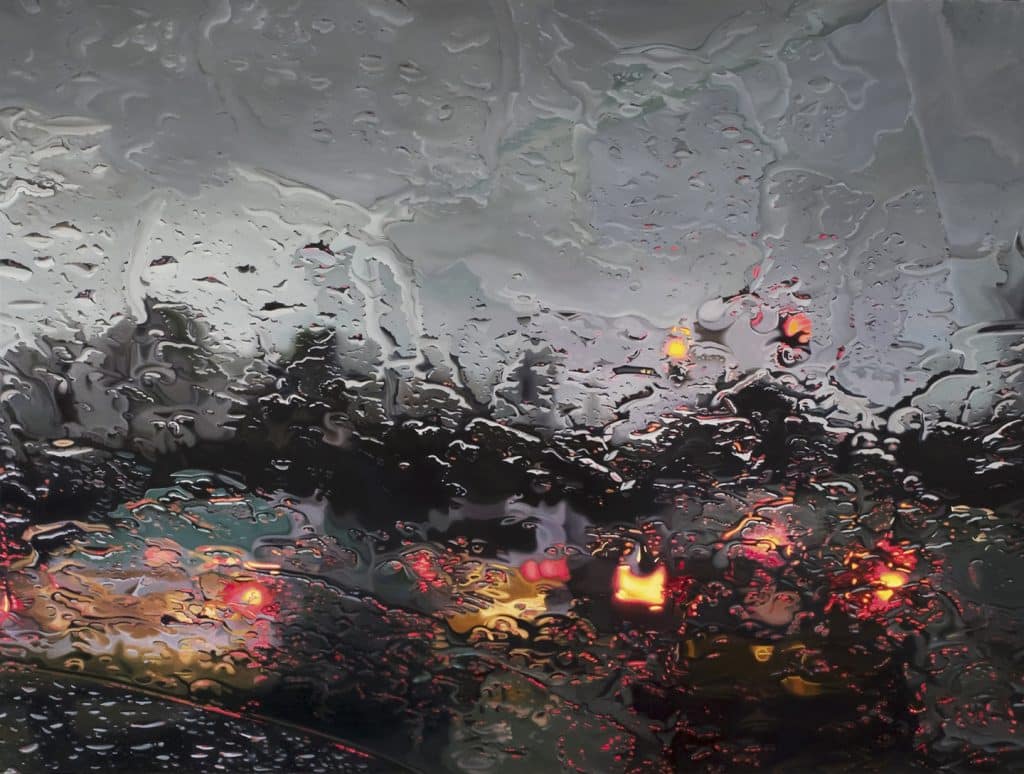 Bullshit that’s a real painting. Bullshit. That’s the featured photo of some particularly uncreative 16-year-old girl’s Instagram page. Probably has a name like “Thinking” or “The Real Me” or some other pseudo-poetic nonsense that the poster thought was creative while sitting in traffic while her mom was driving her to the mall.

In reality this is just a hyper-realistic painting of the view from inside of Gregory Thielkor’s windshield and he has like, a thousand of these sorts of paintings and each one is impossibly more detailed then the last.

I like this one personally, because all joking about Instagram aside (Instagram is in and of itself already enough of a joke—stop making it a thing), this is more or less exactly what I think a lot of art should strive to be: thoughtful and interesting, while being simultaneously impressive as rock fuck.

2. “This Is One Picture” by Bela Borsodi 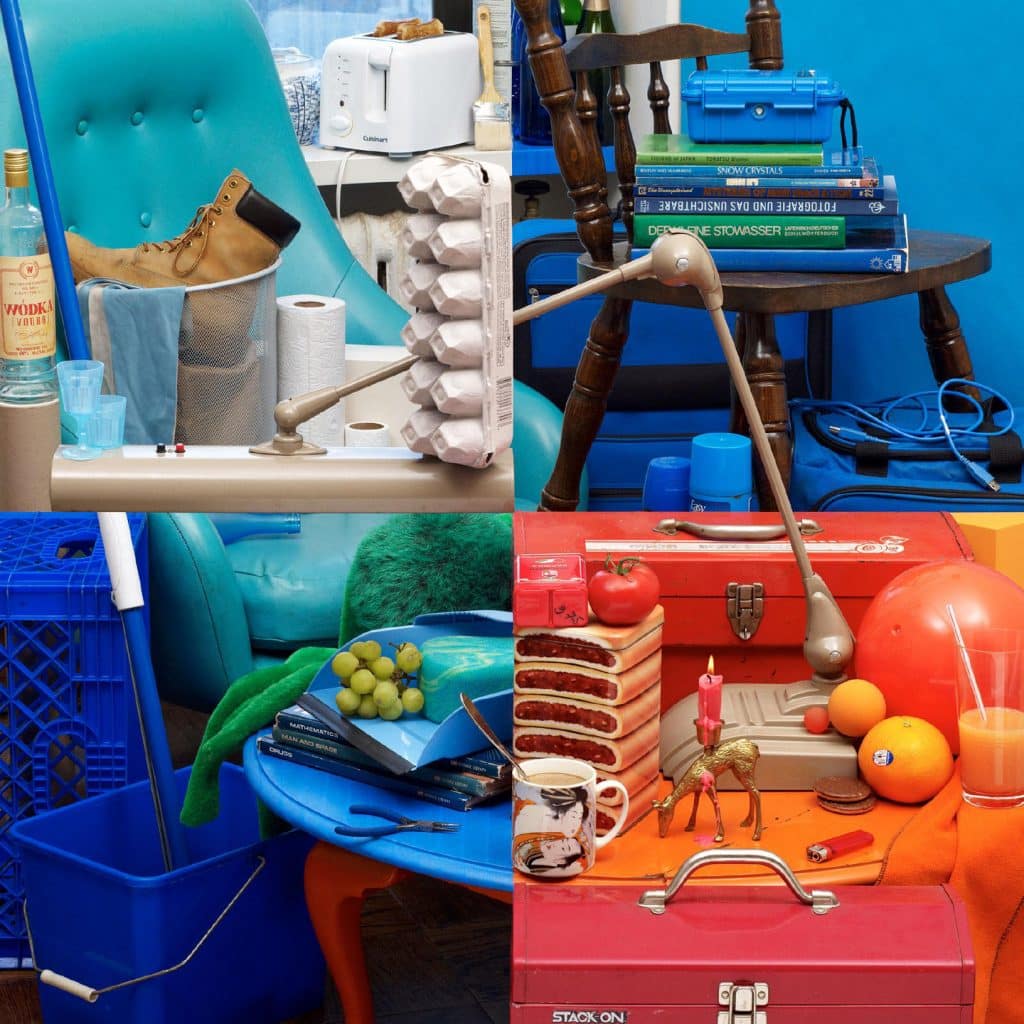 When you look at it, it seems like a clear-cut Photoshop. And I mean literally clear-cut, as if it’s just four other pictures cut apart and lazily stitched back together in quadrants.

But once you see a view from the side… 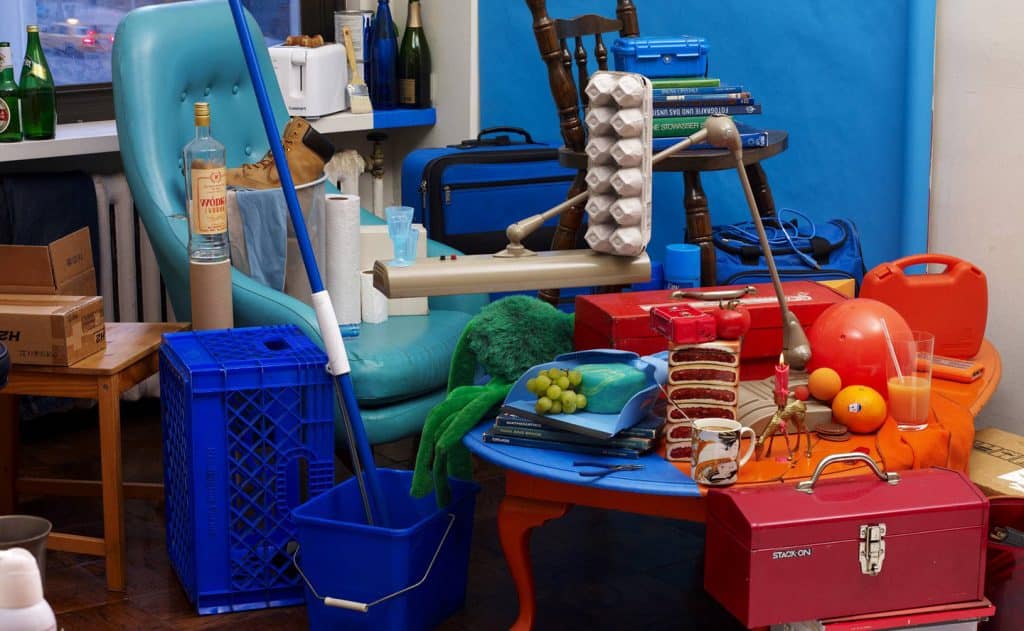 …and then go back to the original, you can start to pick apart the mind-fellating amount of lining and perspective tricks rolled into one.

Or, if you lack any form or function to your imagination, the artist went ahead and made a stop motion video showing how he did it. I warn you though, even after watching it and seeing how it’s done, if you’re anything like me, you’re still going to feel like accusing someone of witchcraft. 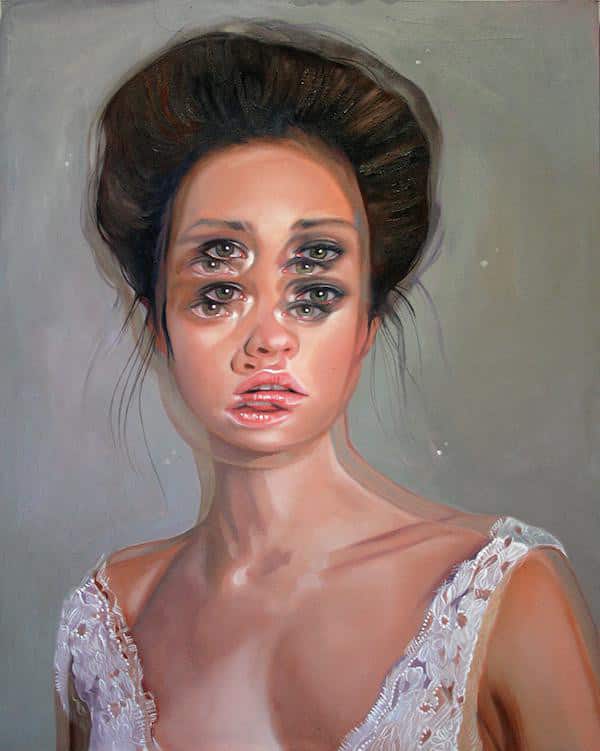 Holy shit, right? Holy shit. I didn’t know there was room in the art world for the category “paintings that make you feel like you just spent a weekend binge-watching 3D movies, and when you finally took off your glasses, everything was still totally fucked up,” but hey, if there’s room for like, nine different kinds of “modernism” then there’s room for that. And Alex Garant apparently paints nothing but this sort of stuff, and she’s very, very good at it.

Points in Case does not condone consuming illegal narcotics (see the above-mentioned fact that my editor is a total coward), but if by chance you happened to consume some amount of hallucinogenic substance (say a staff writer at a comedy website slipped some into your breakfast lasagna), and you wanted to pick something to look at while you waited for the effects of the substance to wear off, then Alex Garant’s gallery page on her website would have to be in the top five, easily.

Other than a specific type of press that his last name would suggest he invented, most of you have probably never heard of Giovanni Paolo Panini. And that’s fine, there were a lot of artists cranking out a lot of impressive art in the 1700’s. However a lot of you may have seen this picture, or others like it floating around the internet… 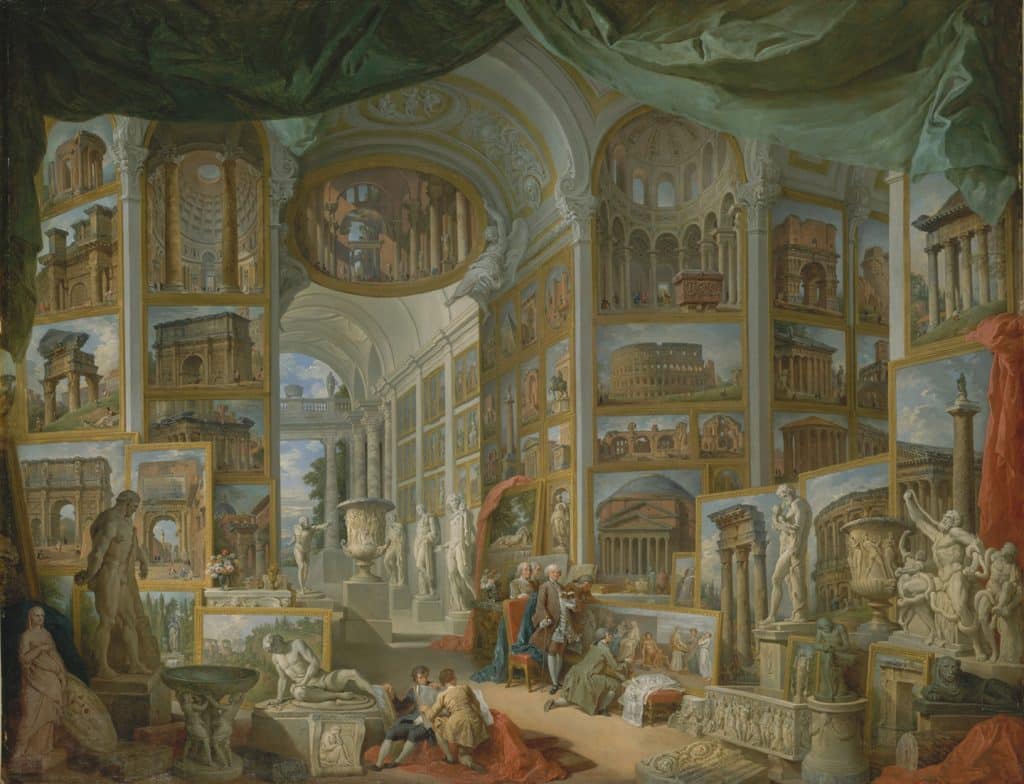 …usually with super clever labels like “Artception” because guys, it has paintings, inside a painting. Remember Inception? Man, that movie sure was neat.

And while as awesome as it would be that my man G-Double-P up there had somehow preemptively named his painting “Artception” or “Paintception,” he lamely went with the name “Ancient Rome” (1757). But what isn’t lame is that this was only the first of a two-part series. Here's “Modern Rome” (1757): 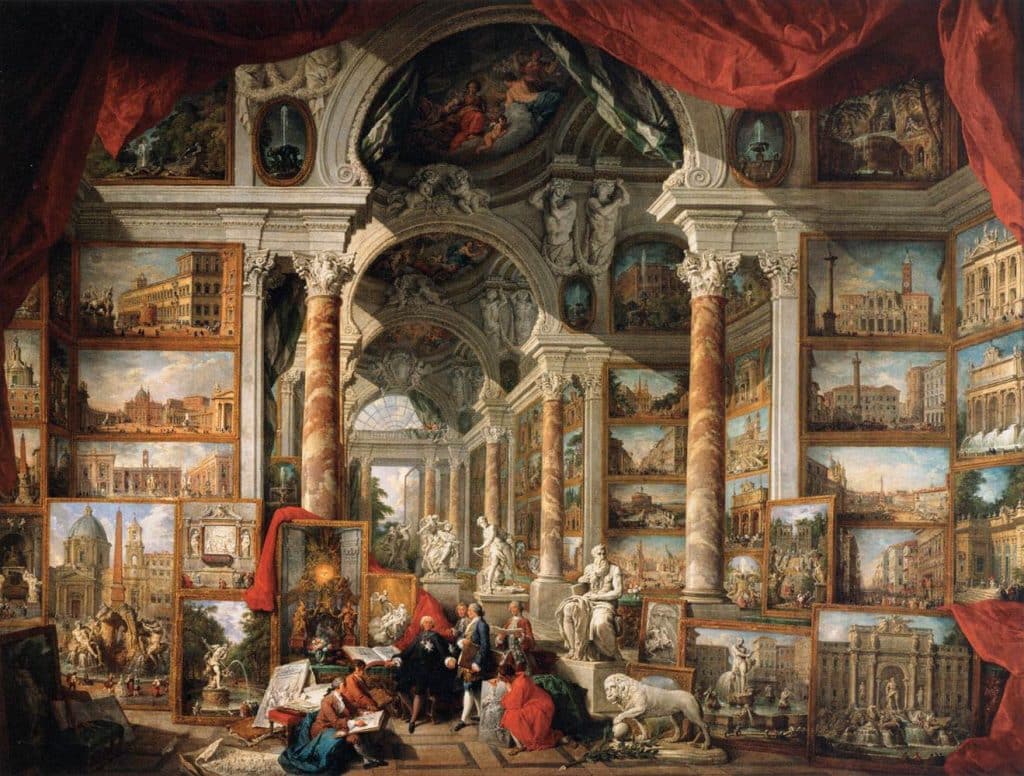 Yeah, he painted a painting full of dozens of other fully realized works of art inside of it…and then went and did it again, because people used to have dedication to their craft, even if that meant hours upon hours of tens of thousands of painstaking, impossibly detailed brush-strokes. And meanwhile, I tried to draw a bicycle at the park the other day and got so frustrated that I threw both my drawing and the bike I was trying to draw into the river so that nobody would ever know about my failure.

If you’re perhaps wondering how in the hell someone even makes a painting like this (maybe with a magnifying glass and a brush that has but a single hair on the end?), it is worth pointing out that these are both colossal paintings, each one much taller than a person. And no, that in no way makes them any less impressive.

Because not all meaningful art must be produced on canvas or sculpture, some true visionaries in the world sometimes turn the focus of their attention to the delicate art known as mixology.

Cocktails. Mixology is cocktails. Or bartending. Whatever you prefer, it's mostly just a pretentious way of saying “mixing drinks.” But at the end of the day, a good mixologist (mixologer? Mixeorologist?) can definitely put enough time and effort into their craft to surpass most of their bartending friends, and create some truly sublime and creative concoctions.

And whoever came up with the idea for Vodquila just blew all of them out of the goddamned water.

No, I've never actually tried it. I'm pretty sure if a bottle of this stuff ever found its way to my desk, I would black out, and then head-smash my way through the aforementioned desk in a fiesta fury of drunken stupidity. So I'm not looking to do that.

I can guarantee that the idea came from some drunk guy at a party pouring the two liquors in the drink's namesake together, chugging it, and then immediately needing an ambulance. But while most of the people in the crowd at that point took the scene as a cautionary tale, at least one entrepreneuring bastard took it as a business venture.

Praised, but definitely not ingested.

Hey kids? Did you like all of those free words I wrote for you? Well, then you’ll probably love paying for more words! I recently self-published (writer code for: “Will never sell well”) my own novel called Wizards and Hard Drugs, which is about exactly what the title would have you believe it’s about. If that title piqued your interest, then go buy it, because it’s ONE DOLLAR and you’ll get a few giggles out of it.

Plus, if enough of you buy it, then I can start introducing myself as an “author” at parties, and then my refusal to wear pants along with my passing alcoholism can be considered “necessary workplace attire” instead of “just sad.”

Related
Forget Magic Beans, I Will Trade You These NFTs for Your Mother’s Only Milking Cow
Rob Rooney
122 More-Fitting Rapper Names That Start with “Lil'”
Jason Garramone
5 Solid Facts That Prove the World is Actually Getting Better
Cole F.M.
Resources