4 "Sociopathic" Behaviors That Actually Mean He's Into You

Don't let your serial killer paranoia stand in the way of true love.

You've just met a cute guy and you're wondering: Is he a scary man with the potential to one day angry-murder you with a phone book and then charm the jury into giving him a shortened sentence, or is he actually (gasp!) into you?

Sometimes it's hard to tell, but if you look closely, there are a few key differences. 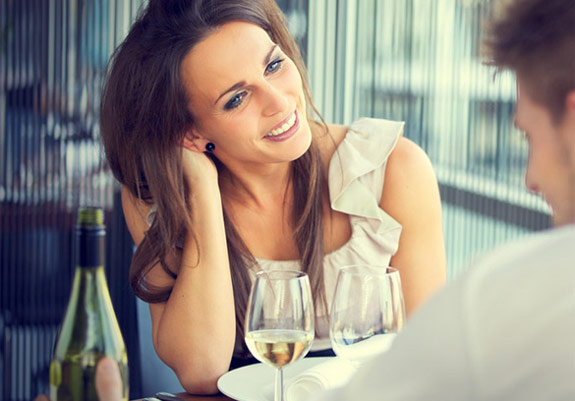 He just can't help getting lost in your eyes!

Sure, maybe every time you look into those unblinking baby blues there's something a little…serial killer-y about his loving gaze, but you just need to get past that, because let's be honest: this is the longest that someone of the opposite sex has looked at you in a long time, and with each newly-engaged Facebook friend, your window of opportunity for true romance gets smaller and smaller.

Would you rather have a guy who never looks you in the eye?

This level of eye contact just means that he's committed to being the one who's always looking at you, whether it's watching lovingly as you walk down the aisle, or staring coldly into your empty, lifeless gaze as he struggles to fit your body into the freezer in his basement.

Either way, embrace it, girl!

Men, amirite?! You're all “It really insulted me when you called me a fat whore” and they're all “It's not my fault you take everything I say so seriously, you dumb bitch.”

Whether it's forgetting to meet you for a dinner date or pushing you down the stairs because you were being annoying, this man will not apologize, and instead has an excuse for everything (“I didn't feel like seeing you today,” or “You shouldn't have been standing so close to the stairs,”).

But that doesn't mean he's a sociopath who lacks normal human guilt.

The reason he doesn't feel bad for hurting your feelings (or any other part of you) is because he knows that your love can withstand anything! He shouldn't have to apologize for fracturing your sternum. After all, doesn't love mean never having to say your sorry (because you can't talk because he crushed your windpipe trying to choke you)?

Manipulative, or just good at figuring out what you really want?

He knows you better than anyone. He's the one who helped you realize that your mom is a lying bitch, and that you should stay far away from her, or that your friends aren't really “just trying to help” and are actually jealous of the love you two share. He just wants what's best for you, and your tiny lady brain isn't always the best at knowing what that is.

His anger is just how he expresses his feelings for you. Yelling = Caring.

That time he screamed at the waiter because he spilled wine on his tie? He was just upset that your romantic date night was being ruined by “the most mediocre fucking wait staff I've ever seen in my life!” Or what about the day you guys were at the mall until he got all red-faced and dragged you out by your hair just because some dude smiled at you? He probably just got understandably jealous at the idea of another man looking at his girl. It's nothing to worry about.

Odds are small that he'll end up shooting you in a passionate rage with the gun you bought “just in case” you ever ended up needing to protect yourself from him. (Not that you'd ever need to, because he loves you and he hasn't hurt you since that last time he did and felt really sorry about it, but you know, just in case.)

Related
Life Hack! These Items Will Last Longer if You Store Them in the Refrigerator
Chris Cunningham
Everyday Tasks That Are Impossible With Someone Watching
Megan Broussard
8 Facts About Water Coolers That Will Wow Your Coworkers
Jesse Shamon
Resources