What's wrong with getting the last word once in a while?

Taking the high road has always been a difficult concept for me. It's like spitting on an opportunity the universe has given you to teach someone a lesson. The woman who cut you off in line at Starbucks spills her iced latte all over her white pants so why wouldn't you immediately empty the napkin dispenser in the garbage so she can't clean up? Watching her frantically run around to save her clothing from being stained is much more satisfying than handing her a couple of napkins. Yet I take the high road and help her. I don't even contribute a passive-aggressive "it's a good thing no one cut off your napkin supply or your white chino jeans would have been fucked." Sigh. The high road is significantly less satisfying. 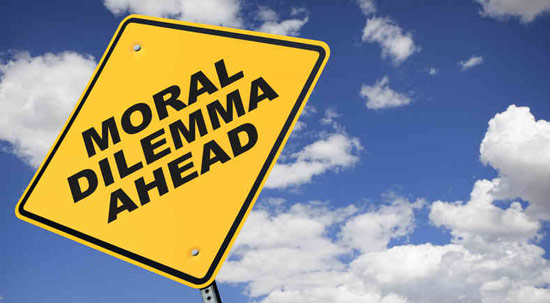 This aggravation is a result of my husband's influence. He is incredibly relaxed and calm. All the goddamn time. And this does not always pair well with my spitfire personality. If we have bad service in a restaurant he will still tip 15%. I will not, citing that it only encourages the server to be less attentive in the future. BUT, he will always come up with sob story in the server's defense: "Maybe he's just having a bad day… maybe his girlfriend dumped him… have some compassion, he may have hemorrhoids." I don't want a backstory on my server's small intestine situation, I just want my food delivered hot without pubic hair in it—and he couldn't even get two out of two right.

Fuck the high road. It lacks passion and slows down progress. The low road may hurt, but it leaves you feeling warm inside. If you're a lazy server then you're in luck if we ever dine at your establishment, because I married the white knight of servers everywhere—a champion for those who forget to fill our water glasses, the patron saint of giving people the benefit of the doubt. He has a permanent express pass to drive in the high road tollway—and while the view is beautiful to him, all I see is the low road flooding with missed opportunities.

We all have that coworker we want to strangle. In the office it's the lanky, pale, creepy guy who never refills the coffee filters and overeagerly volunteers to train only the female interns. In the hospital it's the nurse who complains there's never enough time during her shift to eat anything healthy but then you catch her consuming three cupcakes from a sleeping patient's room. In the airline industry it's the captain who demands a free breakfast from the hotel, when he makes more money than the rest of his crew combined. These types irritate the living shit out of us and yet we stay silent—our only act of rebellion is to roll our eyes silently while their backs are turned.

Why do we do this? Why don't we just take a cruise on the low road once in a while? If only to feel the breeze of honesty and telling someone off to flow through our hair for a few short minutes?

Because we were raised with manners and television.

We learned the lessons of taking the high road vs. low road from Bart Simpson. We know Cartman is a card-carrying member of the low road club, and Rachael from Glee Members Only jacket came in a shipment of one. These are not characters to idolize. These are chapters you find yourself muting until their scene is over. So as a society we press on. We smile politely and let the little things go.

Until one day for no real reason we snap.

Fuck the high road you silently say to yourself as you take a used coffee filter, rip it open, and dump it directly into the empty coffee pot. Screw being nice you mutter as you loudly chew your tofu-edamame salad in front of Nurse Double Chins who is eight doughnuts deep into what I can only assume is a baker's dozen full course meal. Smirk with satisfaction as you dump canned food into your co-worker's cubbyhole with a note attached saying, "I heard you accosted a hotel clerk for a free breakfast coupon. I can only assume you are in dire need of assistance. Here's some canned food I was going to donate to my local shelter—I figured you needed more instead."

When I first started my day job at the airline I had a co-worker who was downright mean to me. He treated me the way a confident high school senior treats an unsure freshman: cold, hostile, with little or no compassion, and if he could trip me up the stairs while carrying my rollerbag he certainly would have. Let's call this a-hole "Jose" because that's his name, and when writing an article about taking the low road, why extend the courtesy of a pseudonym? So he spent two years mouthing off to me and then left the company for a better job. He was fired from the better job and came back to his old one—but he had to start out at the bottom again. He had to repay his dues and was forced to remember what life was like on the bottom. I planned my payback accordingly….

Only it didn't happen right away. So by the time I saw him a year later I was unprepared. Also he looked defeated. The transition from him going from top dog to pond scum was obvious from the exhaustion on his face. I asked him how he was and he said life was hard but he was hired at another company and would be leaving. I wished him luck with an almost genuine smile and sent him on his merry way. It was unsatisfying but also the right thing to do.

I told this story to my husband and demanded upon my return home that I be given a medal and treated to a 12+ dollar bottle of wine.

But I'll tell you what I didn't tell him….

The next morning I went down to the aforementioned free breakfast at the hotel and it was a shit show. It was trashy America at its finest. Men were eating in the same pajamas they had morning wood in. A woman wore her phone in her bra and it fell into the troth of scrambled eggs. She plucked it out and walked away. How do you like your eggs? If it's scrambled with a pinch of boob sweat then book your next vacation at the Embassy Suites in Sacramento. It was chaotic to say the least. So I decided to eat alone in my room rather than the pig farm this buffet was turning out to be. There were no empty tables except one with a lady just about to sit down. I walked up to the table and this was our exchange:

Me: It's a real madhouse in here today isn't it? I'm just going to use your salt real quick on my omelette and then I'm out of here. Have a great day.
Her: (angrily) That is a very bold move young lady.
Me: Not really.
Her: (screams) Yes it is!!
Me: (uncomfortable eye contact) No ma'am, this is bold…

I grabbed her saltshaker with me up and lunged to the exit.

She stared at me through the glass elevator all the way up to my floor. I waved the salt shaker at her from the top floor of the hotel and left it precariously on the edge of the balcony. When I left the hotel that afternoon it was still where I left it, a symbol of rebellion for closeted low roaders everywhere.