When I was twelve years old I got a ping pong table. My uncle bought it for me in a spontaneous act of good will, and it remains one of my favorite gifts to this day. My quest to dominate that table, and the one he himself got in turn, would take me more than seven years time. Seven years of friendly rivalries, family tournaments, and about as much fun as you can legally have in a basement. 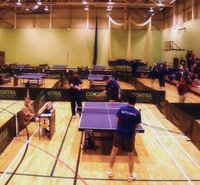 I had some friends who were already skilled players in their own right from practicing on their own tables (Casga & Wyro), and my father and uncle reinitiated a rivalry that had begun some thirty years beforehand when they were in college. We kept track of our games on a dry erase board and the matches played were intense, the points themselves brutal, and each hard fought victory a sacrifice of our very souls, a piece of you being etched in black felt.

When I went away to college my freshman year I continued playing on the table in my dorm. I met a ton of ping pong players, some better than me, some worse, many around the same skill level.

When I returned home the following summer I discovered that my sister had broken the table during a particularly rowdy game of flip-cup, a deed she denies to this very day. It is but a single droplet in the oceanic body that is my disdain for her. I managed to prolong its demise, however temporarily, through the use of a calisthenic-stretching rope, sewing line, and a curtain, but that's only because I'm MacGyver's love-child.

Upon returning to school I decided that I needed to find another way to get my ping pong fix. Living in a shitty apartment with no room for a replacement, it soon became clear that my best choice was to join a table tennis club. I found one nearby in a town called Pikesville, and the following Thursday I pulled up to the local middle school gymnasium high as a goddamn kite.

Tricky Dick was 89 and had two fake hips. Beating him was required to gain entry into the club, or to play anyone else at all. As I walked in the door to the school, even before getting into the gym, I was amazed by what I heard: a cacophony of what sounded like hundreds and hundreds of ping pong balls cracking and smacking off the table/paddle-table/paddle in a sort of harmonia discordia I had never experienced before. What was even stranger is that besides the occasional squeak of a tennis shoe, there was no yelling or even talking to be heard.

Have you ever tried to get coffee in downtown New York City at like 7 or 8am on a weekday? If you're holding up the line or doing something incorrectly, not knowing what you want to order or having your money ready to pay for example, you will get yelled at. Everyone has a tacit understanding of how the world operates and assumes, better yet expects, that anyone who dares immerse themselves in that same world has the same understanding. The Pikesville Table Tennis club was very much the same thing in its own way.

What I would come to find out is that this was the pre-eminent table tennis club in Maryland, if not the entire East Coast. Extremely well-funded, they had thirty premium Stiga tournament quality tables, dividers for each court, scoreboards, a resident coach/teacher, a board of directors, club t-shirts and polos—everything you could possibly imagine that relates to playing serious table tennis.

The club was populated by two distinct groups: Jewish people from the affluent Judaic community that Pikesville is well-known for, and a group of Russian ex-patriot Olympic table tennis players. The coach of the 1984 U.S.S.R. Olympic team and his entire squad had apparently defected from the Soviet Union and migrated to Pikesville for the specific purpose of joining this club.

This was some heavy shit to say the least, especially when it comes to ping pong—errr, table tennis. One of the first things I learned that day was that table tennis is an Olympic sport, the fastest on Earth in fact, with ball speeds exceeding 200mph in most matches. Ping pong on the other hand, is played in basements and rec rooms, YMCAs and JCCs, by casual players and youths who have no earthly concept of what the game is all about. They are lovingly referred to by table tennis players as "cellar dwellers."

But rewind a second to me walking into the school hearing the syncopation of the balls for the first time. As is the case 99% of the time (okay, maybe 100%), I thought I was the most bad-ass mothafucka in the room. Seven years, I tell you. Seven years conquering every foe who dared present themselves on the opposite end of my table. I thought my prowess was untouchable, and walking into this gymnasium, filled with old hairy men in their short-shorts and comfortable Saucony shoes, I had to stifle a grin while my mind ran wild with the havoc I was going to wreak on these old fogies.

After a short lecture on the history of the club, an explanation of the basic rules governing play, and a bunch of other boring shit that the old man explaining it to me took far too much pride in relating, I was sent to the corner court to play Tricky Dick.

I've already mentioned that most of the players were older men (there were no women), and if I had to guess, the average age was probably 45 to 50 years old. Tricky Dick was 89 and had two fake hips; two facts you learned about within the first 60 seconds of meeting him. But most importantly, beating him was required to gain entry into the club, or in fact to play anyone else at all.

In order to play Dick, you had to accept to a few rule changes. First, you had to let him lean on the table with his off hand when he played—usually a big no-no in table tennis (you can't touch the table at all in fact). Second, you had to pick the ball up for him after every point no matter where it ended up because, well, the old fucker couldn't bend over far enough to pick it up himself.

So there I was, 23 years and excited as hell to have found what was no doubt the mecca of table tennis. I'm standing across the table from someone who was born in 1914 with two fake hips laying these cheesy old-school one-liners on me (like old people like to do), one after another after another. I'm a pretty good sport, so thinking this was going to be an ass-whooping like no other, I decided to take it easy on him to start.

Tricky Dick had earned his nickname let me tell you. He had a technique almost impossible to explain, but was essentially him cutting off the angle of the ball such that he could drive it off the side of the table at incredibly acute angles. He had a firm grasp of what's called "anti-loop," a technique reliant on the theory that no matter how hard a ball is hit, if you can control the angle of deflection you can return it using the same force used to propel the ball in the first place. Combining this with his forward leaning stance, and he could literally take any ball I was hitting and just ping it back off my side at un-returnable angles. Of course, each winner was accompanied by a smart-ass remark like, "Go fetch!" or "I fought two wars before you were even born." Talk about a check to your ego, losing a game in something you think you're good at to an octogenarian with zero mobility and enough one-liners to make Groucho Marx jealous.

I went on to do pretty well for myself at the Pikesville Table Tennis Club. I got a new (real) paddle, took some lessons from the Russian, and eventually I was even afforded a spot in the rotation at the two "elite" tables where only the best players were allowed to play. I always made sure to check back in on Dick though, not just to see how he was feeling that day, or to hear another cheesy joke about Iwo Jima, but to see who was battling for their spot in the club that night, having to chase ping pong balls like a goddamn Labrador Retriever and getting their egos checked just like I had.

Related
The Parking Garage Is Compromised, So How About We Trade Federal Secrets at La Romantica?
Nathan Cowley
Common Complaints About Our Clones
David Guzman
So I Caught You Trying to Sneak an Ice Sculpture Through Security. Again.
Aarushi Gupta
Resources