My garbage disposal is broken.

In fact it's been broken for a while now. Because of this, I have developed a very advanced set of behaviors aimed at dealing with life with a broken garbage disposal.

The main problem is that the water doesn't drain out of my sink. I have to run the disposal for about a minute to get rid of every two inches of standing water. Originally, I did in fact call maintenance to come and fix it. While I cannot describe the ineptitude displayed during this highly characteristic visit, I will admit that I made the mistake of draining the sink and cleaning it beforehand, and this probably didn't help the fragile mindset necessary for the working acumen of the maintenance man. 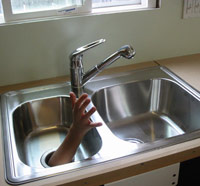 His advice was, and I am translating this into English mind you, to put some ice cubes down the drain and grind them up. This worked because of scientific principles I am still struggling to understand. Something along the lines of, ice is an adhesive substance that during the grinding process would spread out evenly, thus collecting whatever fragments were blocking the drain in a manner that would then enable them to no longer be a problem. My degree in MacGyver left me highly skeptical of his claims, the dubiousness of which was only confirmed after wasting an entire tray of ice.

So it was with this disheartening experience in mind that I began using my sink scrupulously and draining the water when necessary. I have developed all kinds of skills requisite to this experience: filling my Brita in the tub, disseminating food waste from garbage, attaining the most productive syncopation to employ whilst manning the disposal switch, and so on. I could regale you with the hilarious minutia of my troubles, but there is a larger point to be proffered here.

I have been investing my time, thought, and energy into a faulty system, a system that is antithetical to any one of my many goals in life. Among many other, deeper realizations, this has helped me to understand that my life is in fact full of these faulty systems of investment, and on some level always has been.

How have I let myself be compromised again, and again, and again by people of a completely worthless nature? I can't help but think of a printer we had when I was growing up that required the most incredible ceremony known to domesticated man to print from. The paper had to be massaged just right each and every time the demonic conveyor belt began feeding it to the printing press. If I hadn't had such a penchant for erotic literature (and perverts weren't so long-winded) I probably wouldn't have mastered the technique or spent so much time investing myself in this faulty system to begin with. But not all these faulty systems are concrete and mechanical.

There are also faulty philosophical systems. The most prominent example of this sort of phenomenon is the ritual of behavior that comes with dealing with someone that you don't like on a regular basis—or not dealing with them. Whether it's a classmate, family member, or co-worker, we all have people in life that we despise—or at least I hope we do. If not, that just makes me a misanthrope, which I am fine with personally, but at the least probably puts me on the border of copyright infringement from the great Justin Rebello.

The more I have thought about it, the more infuriated I have become at the realization that so much of my life has been aimed at the subjugation of the inferior and the faulty. Where have I categorically missed out on the fact that I have been pouring my brilliance into the deficiency of defective handiwork? How have I let myself be compromised again, and again, and again by people of a completely worthless nature? Is there any possibility of a derivative iteration of the Skittles brand being more delicious than the original? Sorry, that last one slipped in their ‘cause I'm really hungry right now.

Perhaps you too have found yourself thinking about the ways in which you have invested yourself to no end. Of the machinery, the people, the situations you find so undesirable, and the actions and behaviors you have taken to avoid them in a manner that could only be deemed fruitless at best. Or maybe you're just as worried they'll never come out with another good Skittle variety again as I am. I'm afraid my friends, that I have no one answer for why this has all happened. It is clearly a categorical and systemic problem that has to be dealt with at its core.

My only suggestion would be, Marine flavors: urchin, kelp, seaweed, crustacean, and crab.

It's good to be back.