You Can Camp, But You Can't Hide From the Occupocalypse

A firsthand account of the madness fueling Occupy Wall Street.

With 2011 coming to an end, it's time that we reflect on what a great year it's been, especially with the highly anticipated 2012 most-likely-zombie-apocalypse just around the corner. Some of you may still be naive and thinking to yourselves, "Don't be silly, the apocalypse is just something Hollywood made up to scare people into behaving—like super villains, or the Bible," but if you look at the signs, it's obvious. Like Nostradamus predicted, birds have been falling from the sky, earthquakes continue to rage beneath the depths of the ocean, and Mercedes has halted production of the Maybach.

I awoke in the morning to the mixed aroma of meat and Footlocker Water Repellent. To add insult to injury, people all over North America have suddenly lost the will to work, opting instead to live out their urban camping fantasy under the guise of "Occupying Wall Street." In the hopes of better understanding my fellow man—and because I pride myself on being open-minded—I decided to go visit these cunts recently to see what all the fuss was about. 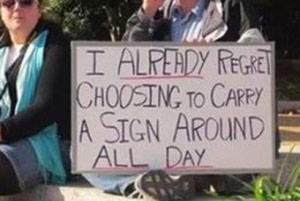 Ironically, protesting is taxing.I arrived early, ready to brave the conditions in nothing but my Timbaland boots, Levi jeans, and insulated Canada Goose jacket. A sharp wind whipped across the makeshift shanty-town where the protesters were holed up, making a cold November morning noticeably colder. Fortunately, a Starbucks Venti Americano kept my hands warm, so I didn't really notice.

I walked up to their camp to get a better look when I was approached by a disheveled man in his 30's holding a sign that read "99% Problems." He asked me if I wanted to be part of something called a "human megaphone." Disgusted, I pushed him away, refusing to be part of something so disgusting and vulgar! He looked at me in shock, which is when I realized that I misheard him and thought that he said "centipede" instead of "megaphone," a mistake I partially blame on the fact that I was wearing my Beats by Dre earbuds.

I apologized profusely, learned that his name was Aaron and that he had arrived at the camp a week ago with the strongest intentions of occupying something. I asked Aaron to introduce me to the leader of the tribe, but he said that they didn't have a single leader. However, he did agree to take me into the thick of the camp and help me start protesting on the condition that I give him the rest of my Starbucks. I begrudgingly obliged and picked a spot under a tree that I immediately began to occupy. 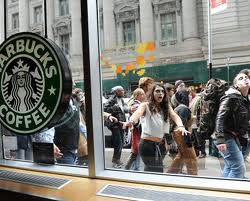 I awoke in the morning to find myself hungry and shoeless, sleeping dangerously close to either a successful homeless person or an unsuccessful grad student. The mixed aroma of meat and Footlocker Water Repellent answered the mysteries of "What are we eating?" and "Where did my shoes go?"

After grabbing breakfast and finding suitable grocery bags for my feet, I learned that we were marching today. I suggested that we march to the nearest mall so that I could get some replacement shoes, but apparently we aren't using anything made by "The Man" during the occupation. We walked for what felt like hours while Aaron and the rest of the gang stopped traffic with their signs and yelled "Trickle threat!" at random pedestrians.

Three hours later we returned to the park and the hunters were dispatched to bring home dinner. Since we were in the middle of a metropolitan area I had no idea what the "hunters" were going to find, but an hour later they returned with half a dozen skewered squirrels. Although I was disgusted, my fear of hunger outweighed my fear of contracting rabies. On a side note, it tasted a lot like Arby's.

Over the last few days I've managed work my way up the ranks to become the de facto leader of this gang. It wasn't easy, costing me my jacket, and one of the more uncooperative members their life (ended swiftly thanks to the Mastercraft Box Cutter), but I now have these fools at my fingertips. Under my rule, we will occupy stronger than ever!

Over the next few days I plan to expand our operation outside of the park and into neighboring homes and businesses with the help of Smirnoff bottles and oil-soaked rags. For now I'll rest and keep my energy high by getting Aaron to bring me more squirrel meat.

The police arrived today with an eviction notice because we made too much noise the last few nights. They were really cool about the whole thing. One of the cops even offered to give me a ride home but Aaron said he had room in his BMW. Plus, it turns out my condo is right beside his!