Some people say that in this economy I should consider myself lucky to have a job. And if that's true then why don't we see those unemployed Wall Street guys apply for a managerial position at McDonald's. Shouldn't they be grateful for a comfortable cushy job amongst the deep fryers and frozen beef? 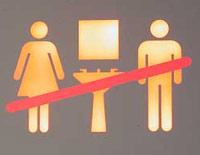 My job as a flight attendant sucks. People think I'm zipping around the universe, but the truth is I don't fly anywhere noteworthy. Never Honolulu, not Cabo, absolutely nowhere warm. I am forced to fly places like Calgary, Ottawa, and Winnipeg (Canada: God's personal freezer). Never do I overnight at the cool Canadian cities, like Vancouver or Toronto. I hate my co-workers who insist on touring Canada in the winter months. My only need for adventure and exploration is trying to figure out how to convert Celsius to Fahrenheit in an effort to ward off hypothermia by successfully cranking up the heat in my hotel room. A true pioneer, I know.

Canada is one giant frozen tundra. Once I got off the plane for 30 seconds and stepped into -35 degree weather. My nose started to bleed and my contacts solidified in my eyeballs. Blind and bloody, I looked like Lindsay Lohan at an after hours party. Hell is not warm I tell you—it's Winnipeg.

I wonder what it would be like to elbow some bitch in the face and blame it on turbulence…Some of my friends are in awe of my job. They believe it to be glamorous and elegant. I allow them to believe this. It's better for my self-esteem to allow the false existence of a fast-paced jet setter's life than the reality of being genuinely excited to go on a tour of a local South Bend brewery.

Every comedian I've heard always does an airline bit in their routine. Actually being in the industry for almost two years now I feel like I have enough material to write a book and retire. I would call it, "Fuck You, Next Time Take the Train Ya Douche." It will be a New York Times Best Seller for sure.

O'Hare is the worst airport in the world. There is an airport that consists of a rundown shack the size of a Taco Bell restroom in Rwanda attached to a runway littered with beer bottles and rat carcasses that is better than O'Hare. I wouldn't have much confidence in the flight crew but at least we'd be on time.

I am amazed at the people who book a 30-minute layover before their next flight in Chicago. They ask me to hold their plane for them. Really? Last time I checked my qualifications peaked at using the coffee maker. But perhaps my navy polyester blend uniform reflects my superhero ability to telepathically inform Air Traffic Control that Nick Henderson in seat 7B needs to hold a 747 aircraft at the gate because he's running behind schedule. The other 300 people on board won't mind.

My patience for this job is running out though. While I would never physically hurt anyone, mentally, I wonder what it would be like to elbow some bitch in the face and blame it on turbulence. My mind tends to wander if filling out all the paperwork would be worth it. I'm sure once it is I'll quit.

The security line is my favorite place to screw with TSA. Employees have their own checkpoint, but I go through with the masses just to watch these TSA turds take their "3 ounces of liquid" policy too seriously. The arthritic 90-year-old woman and her Metamucil is not an immediate threat. I promise. So I make it a point to throw something random in my bag every time I go through. I've filled my bag with just my dog's chew toys, Jell-O pudding packets, and three rolls of toilet paper, just to see their reaction. But my finest moment was putting three giant cucumbers on top of my clothes. I smirked, nodded a confirmation, and said, "I've got a four-day trip and the organics are bigger and stay fresh longer." The guy X-raying it looked at me with a mixed expression of disgust and admiration.

Once I got stuck in San Antonio without my overnight bag. I had to run over to

Wal-Mart for some clean underwear and picked up a bottle of Febreze air freshener while I was there and hosed down my uniform. Never in my life did I get more compliments or have more women ask me what perfume I wore. I explained that it was my fabric softener, and that I refuse to fork over 90 bucks to Ralph Lauren every three months for my perfume. I'll do a daily shower and smell like a spring meadow the rest of my life if it means saving $360 a year.

Most passengers are rooting for the child's toy that promotes almost immediate asphyxiation.When people complain and borderline scream at me for a weather delay I turn to them and say sympathetically, "I know how you feel. My two brothers are in Iraq right now and I really wanted to send them their care package tonight. Their squad got hit by an IED last week and we almost lost them. The baked good may be stale when they get there but they appreciate the Maxims and other manly magazines we send them. You know?" I don't feel bad lying to them, because it gives them some perspective—White Plains, New York will still be there if we're half an hour late.

Parents who don't bring entertainment for their small children also puzzle me. A three-hour flight to Calgary with no in-flight entertainment except me struggling to fit the beverage trolley down the aisle without chopping off someone's arm is not cutting it. $150 for a portable DVD player will pay for itself on one flight, I promise you. It's either that or a plastic bag filled with Skittles. And let me tell you, most passengers are rooting for the toy that promotes almost immediate asphyxiation.

By the summer I will be back in school—good old community college getting my criminology degree. The theatre one has gotten me nowhere but a tour of the LA casting couch which I ran from. And if you know me then you know I am the last person to walk briskly, much less go on an immediate jog. I cannot wait to quit. Some people go postal to celebrate their send off, but just knowing that the misery of dealing with O'Hare continues is more than enough to keep my heart content for a long while. The only thing I'll genuinely miss is the employee security line. I put a bikini on a watermelon I can't wait to use.

How to Get Away With Murder? First, I’d probably pick a different name for your show.