It took a knock-down Drago-Rocky fight to convince the USA and USSR to back off.

The year was 1985. Sweat rolled down Ronald Reagan's frowning brow in the Oval Office as he contemplated where to deploy his G.I. Joes to placate the onslaught of Lieutenant Colonel Ollie North's team of Ken Dolls waiting at the door. This was the Cold War.

But, of course, none of that is true.

At the meeting of the 27th Congress of the Communist Party of the Soviet Union in 1986, Mikhail Gorbachev, Figurehead of the State, unveiled his plan to implement glasnost (openness), demokratizatsiya (democratization), and perestroika (Hawaiian Shirt Fridays) to revive the slow-moving Soviet Union. The stagnating Soviet economy threatened the Union's regression from a land of tundra, vodka, and nuclear weapons, back to the former years of just tundra and vodka.

In late 1985, Apollo Creed seemingly descended from the heavens dressed as Uncle Sam, baptized by the musical talents of James Brown: “This is my son, in who WOO, OW, WATCH ME!” Creed emerged in the ring, a valiant patriot ready to take on his towering foe in either Sly Stallone's tacky delusion of the American plight or one of the greatest scenes of American satire ever, depending on how high you are.

Ivan Drago stood across the ring—an imposing 6 feet 5 inches, 261 pounds—with blonde hair that would make Corey Haim look like he got a Supercut, and a chiseled chest that could take the breath away from even a straight man writing an article ab…..out him.

“If he dies, he dies,” uttered a cold Drago showing his command of both the English language and metaphysics, glaring across at a defeated Apollo Creed barely clinging to life. Die he did.

Gorbachev, undoubtedly watching his nation's most prized specimen, saw the extravagant spectacle that is the MGM Grand, and realized that the money generated was made possible only by the miracle of competitive, unbridled free markets; the celebration of individual effort; and smoke, mirrors, and externalities.

The Americans realized that Soviets would continue to be a formidable foe, and economic woes would not placate their ability to challenge Yankee ingenuity technologically, as demonstrated by Drago's undoubtedly chemically-enhanced physique and power. In addition to questioning dogmatic patriotism and idealism, a public, high-profile introduction to the personification of the enemy the American populace was so encouraged to fear, cast doubt upon the dehumanization of the nemesis. We realized that commies with chiseled facial features are people, too.

Rocky's close friend, former employer, and brother-in-law, Paulie, was given a robot aid, presumably to help clean, cook, and give him robot AIDs (the advanced AI isn't missing the D's function—it was still the 80's). Although this pinnacle of brilliance in robotics becomes slightly less impressive when you consider it would eventually be replaced by Furby, it remained a signifier of the rapid development resulting from Cold War tensions and competition. (Kids, write that down. If you can't remember which war the Cold War was, remember that it caused Furbies.)

Aside from being Paulie's “pleasure-bot,” the robot moonlighted as the caregiver of Rocky's son throughout much of the film, because everybody who's seen Pretty Woman knows that emotionally unavailable hired girls have hearts of gold underneath that silicon (or silicone) exterior. Rocky's son is clearly later replaced by an android, since he's around 9 in this film but is magically a teenager in Rocky V, which takes place directly after.

Other than the fact that the Americans' relentless tenacity would possess them to abandon their children to train at a terrain in Russia that would be far more easily accessed in many of the Continental United States, the Soviets realized that there were far greater problems than petty international grievances on the horizon. Robots infiltrated the single most important family in the wealthiest country in the world, and by offering sexual services, they had begun to halt human reproduction.

Drago's ruthless attitude won him no friends in the heavy American crowds of the MGM (seriously, everyone was fat). Although seemingly meeting the same disapproval in Russia, Rocky's iron will began to sway the Russian fans in his favor.

“He's just a man!” Rocky's corner collectively decided of Drago after contemplating the possibility of transsexuality due to his fine facial features and giant wife, Brigitte Nielsen. “He is like a piece of iron,” Drago laments, likely after watching Stallone in The Party at Kitty and Stud's. The tides turned in the sweat and sexual ambiguity.

They started off jeering, hurling insults at Rocky like, “You capitalist swine!” and “Larry Bird is a gay!” and “Your sister married black man!” As the fight progressed, the crowd began to chant supporting words to the American: “Pork is not so bad!” and “It's fine we have gay friend!” and “We were wrong, he was just Puerto Rican.” Drago then abandoned his role as the fist of Russia to fight for his own pride, as the audience was shown how quickly pride wanes in the presence of displays of the indomitable human spirit and mutual racism as Rocky pushed forward.

The Soviets learned that there are motifs in humanity that echo in all of our interactions. Despite our differences, we're all searching for the same things: redemption, an adequate supply of food, and a livable climate—well at least Rocky made them feel like we had that in common.

The desperate need for catharsis in the building war boner of the incumbent administration was satisfied as we were finally behind enemy lines. This allowed a refractory period for tensions to settle until our balls stopped aching and we could get it up again. The arousal from breaking through the Iron Glory Hole was also misattributed to change in the political climate as a result of the fight, deceiving Americans into developing a taste for diplomacy until the next time an NSA employee with secrets needs a place to hide.

4. The Most Important Words Ever Spoken

It's hard to elaborate on such eloquence. These fateful words, spoken in the final moments of the last chronicling of the Pride of Philadelphia's fictional life worth watching, hold their weight.

It's true, this article blurs the lines between fact and fiction.

No, Rocky Balboa is not the greatest undisputed heavyweight boxer to ever live. However, in this world there really is a statue of him standing tall in Philly.

No, Brigitte Nielsen wasn't really married to a deadly, Russian pugilist named Ivan Drago, but although even less probable, she WAS romantically linked with Flavor Flav.

Maybe Sylvester Stallone didn't really sustain brain damage in the fight, but his next two films WERE Cobra and Over the Top.

As you sift through fact and fiction, it's clear that the line between these two realities becomes so distorted, you could reason there's no line at all. So maybe there's an alternate universe where there is no Rocky IV and also no Cold War, but would you really want to find out? 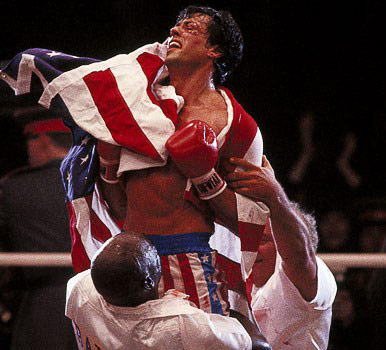 Maybe if you're a freedom-hating commie.