Go Ahead, Kill These People

Give us your poor, your homeless, your ugly, so that we may eliminate them.

We need more mass shootings in this country. The wholesale out and out slaying of humanity gets a bad reputation because people think they're important. Which is funny to me. People spend the majority of their time eating fried foods and watching television. And while I will admit that watching television and eating fried foods are certainly pleasant endeavors, they're not productive. People, for the most part, are (as the Late Great Bill Hicks once said) viruses with shoes. And as such, we should eradicate and remove as many of them as possible. 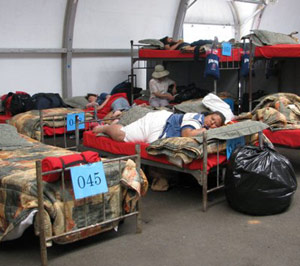 We can't continue to shelter the homeless from reality. But, like anything else in this mixed up world we live in, you got to have rules. You can't just go killing everyone willy-nilly and expect it to be okay. There are certain people who cannot, under any circumstances, be killed, and other people who should, no matter what, cease to exist. The following is your guide to your next killing spree.

No need to thank me; I was put on this planet to help.

Poor people suck. They barely pay any taxes, they often have to steal, and many of them smell. Quite frankly, I don't know why they get to vote on the same issues as me. Clearly we face different issues in real life. (I have to worry about whether I should bother paying extra for the parking assist feature on my next car; they read bus schedules.) Poor people contribute nothing to society. All they do is take and take and take all the while complaining that they don't get enough stuff. That's why they should be killed. Only after we've used them to kill the homeless.

Homeless people are worse than poor people because they don't even have a crappy little bank-funded place to hide their ugly selves from the rest of humanity. They're just out there in society all the time being ugly and smelly and asking for change, and many of them won't even beat each other up for ten bucks a pop anymore, which is just beyond lazy. All you have to do to kill homeless people is poison the supply of food at homeless shelters all across the world, preferably on Thanksgiving, when they really expect people to give a crap if they starve or not. If you pay the poor people to kill the homeless people, maybe some of them will earn enough to pay taxes and thus become productive members of society, unlike these nasty ugly homeless people.

No one should have to look at ugly people. And killing them makes the future prettier. Isn't that something we can all get behind?

Murdering Batman fans and drug dealers and fashion designers makes a lot of sense, I will grant that to all you would-be mass murderers out there, but the truth is that the root of all of our problems are ugly, poor people. Ugly poor people are a drain on the taxpayers as well as the olfactory senses.

Now, I know what you're thinking. You're thinking, "Nathan, I should be allowed to kill whoever I want, whenever I want. This is a free country after all." And you're right, but sometimes you just have to consider the greater good and kill the worthless. Killing bright, attractive and capable people only makes it more difficult to find a cute waitress who can remember that I do not like sour cream on my freaking baked potato. And no one wants that, least of all me and my dinner companions.

As Hillary Clinton once said, "It takes a village." And we all have to remember that the next time we decide to kill a whole bunch of people at once.