A warning from Copernicus Thunderbird: forgo the Robocop statue.

People of Detroit! I have had a vision of a dark future! Your apocalypse grows near! Robocop shall be the seed of your undoing!

Now listen, I know you think having a statue of Robocop is really cool. Hey, I'm right there with you. But you have to believe me when I tell you that it will bring about your downfall. It's just not worth it. 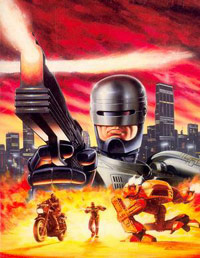 Do not give in to robotic temptation, Detroit. My name is Copernicus Thunderbird, and I have a rare medical condition known as junkie clairvoyance. That means I can see the future whenever I shoot dope. Kinda like that one guy on that superhero TV show. I'm actually suing them about it. Defamation of character and copyright infringement. Does that show still come on? Did they cancel it? I don't have a TV and Best Buy banned me from the store so I can't watch theirs anymore. Something about stealing food and humping a speaker. I mean if they didn't want me doing it, maybe they should have put a sign up. That's just common sense. Oh, like you've never hit an old lady in the back of the skull with a Guitar Hero prop to steal her dentures and sell them to gypsies. Well aren't you just the model fucking citizen? You know how much you can get for a set of clean dentures on the gypsy black market? Three dollars! I could live like a king!

So what the fuck was I talking about again? Oh, right. Robocop statue.

Here's what's gonna happen. Tourism will increase. Population will explode tenfold. People will travel from all over the world to pray to the Robocop statue, so that it may bless them and bring them wealth and heal the sick. Detroit will become the capital of America, and Peter Weller will be elected president. And he'll be really, really bad at it.

The world will covet your Robocop statue, and they will wage war to get it. Japan, China, Russia, India… pretty much everyone is gonna want a piece of you. They will plot against you, not unlike the evil magic gnome that hides in my shadow. I'll kill you, Ted. You can't hide forever. 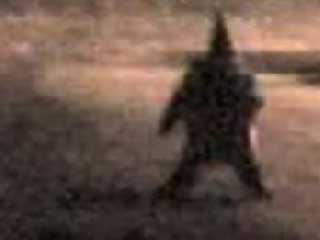 You can lurk, but you can't hide. 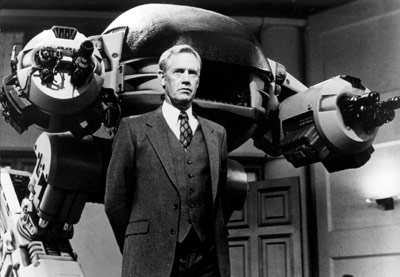 And don't think the crime community is just gonna roll over and take it. No sir. You chase that dragon and you will get burned. You may have the lock on back-alley rapists and wasteland marauders right now, but once you start making heathen idols to fictional robot men from the 80's, you'd better get ready for a whole new level of riddle-spewing costumed maniacs to roll into town. I'm talking about supervillains and crack-smoking cyborgs straight out of Arkham Asylum. Gangs of ninjas and punk rockers will rule the streets. Everyone will have rocket launchers.

The town will be taken over by a Four Loko baron from the East. It's all in the prophecy. He'll bring his black market booze to Detroit, and Detroit will love him for it. He'll sell it to children, and it will poison them because children are lightweights that can't handle their crack-infused alcohol.

And after the whole town is once again hooked on Four Loko, he will unveil Eight Loko. And all those who drink it will mutate into hideous undead tentacle demons. Are you prepared for that, Detroit?

Still don't believe me? Well let me tell you something. My visions are never wrong except for that one time and that other time. But this was really good smack. I mean this was some heavy Nostradamus-grade shit.

And before you choose to ignore my warning, I would like to remind you what happened in Twin Earth Bizarro Miami when they built a statue of Sonny Crocket and Rico Tubbs. Or maybe you don't remember the flying-monkeys-with-submachine-guns invasion. But my god, they had the best coke in town. I should go back there one of these days.

Sorry, my mind was somewhere else for a moment there.

Now I don't know whether or not you've built this thing yet because I've been sleeping on last month's newspapers, but hopefully I'm not too late. Sure, you could spend fifty thousand dollars on a statue, but you could also buy a lot of heroin. With that much smack I could work as a full-time oracle. Copernicus Thunderbird, The Oracle of Detroit. It has a nice ring to it.

So yeah, just go ahead and give me the fifty thousand. That's a five and four zeros.

Remember what I said about the flying monkeys. Don't think it can't happen to you.

Continue to “Christmas with the Kardashians (Black Tar Prophecies, Vol. 2)” »

If math is hard, then why are mathletes so soft?