The mega-seafood hit to the wallet in order to have sex with your girlfriend.

At every stage of his life, a guy has 4 words that he never wants to hear. They could be anything, like "I broke your Xbox," or "We'll have to amputate."  But if you happen to be on a date, particularly a first date, the four dreaded words are particularly horrifying. The only way they could be worse is if they were spelled out in giant letters by hissing spiders.

I'll have the lobster. For decades, this sentence has been like four rusty daggers plunged into the chests of decent guys. Guys who just want to make a good impression and maybe make it to third base without having to take out a bank loan. If you hear these four words, stand up and run away from the table at top speed.

I looked at my dinner, and he looked back at me, or at least he did until I rotated my dish 45 degrees. Ah, lobsters; those delicious gargoyles of the sea. If the mer-people have their own version of Fear Factor, surely the contestants are challenged to eat spiny lobsters while trying to swim away from a giant propeller or something. Yet we land-dwellers have no problem boiling the monsters, prying their flesh out of a carapace, and serving it with clarified butter. And we'll pay handsomely for the privilege.

I can't figure out how the scariest food on the menu also happens to be the most desirable to women. When his date orders the lobster, a guy can be sure of two things. One, he's about to blow his entire god damn paycheck on this stupid meal; and two, the greedy bitch he's with is going to struggle with the logistics of meat extraction, and leave half of it behind.

In the past, any girl ordering lobster on a date was kind of ethically obligated to put out. So, guys were happy to see a smiling red face (other than the ethnic waiter). But thanks to feminism, modern women have figured out they can sting us for exorbitant meals, and if we even suggest that this is somehow a promissory sex-note, the only fine dining in our future will be tossed salad, prison-style. 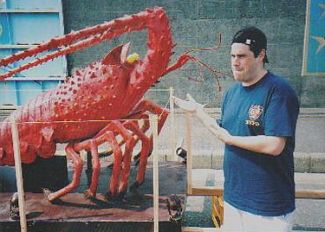 Recently, I took a trip to Halifax, Nova Scotia, one of those quaint seaside towns known for two things: fish-themed souvenirs, and fresh lobster. Naturally, my girl couldn't resist putting me through a night of expensive humiliation, so we sought out the best lobster dinner we could find. I tell you my story in the hope that you might be better prepared for the day it happens to you.

At first, I thought we could settle for McDonald's. Non-American franchises always adjust the menu to suit the local palate. Israel has the McShwarma, France has Snail McMorsels avec zee Brie, etc. And Halifax has McLobster Rolls; a hearty helping of questionably-refrigerated shellfish plopped on a hotdog bun. But I was speedily informed that such a choice would render my genitals all but useless for the remainder of the trip.

Instead, we found a nice restaurant with classy decor and a flamboyantly gay waiter. I knew that was going to mean trouble. For all their mincing and shouting "Yoo-Hoo!" gay guys know fine cuisine, whereas I emphatically do not. And I didn't want any fingers waving at me that might have been up a sailor's rectal cavity.

For an appetizer, she ordered the scallops. I'm fairly certain she doesn't actually know what the fuck a scallop is, only that it's something on Gordon Ramsay's menu on Hell's Kitchen. And if sixteen aspiring chefs can cook them while being screamed at by a clinically insane Scotsman, surely non-TV chefs can do an even better job.

But the meal would only go downhill from there. First, they brought out bibs for us. I don't care how macho it is to rip apart a dead animal with your bare hands, there's no way to do anything in a bib and still retain even a shred of dignity. If you don't believe me, go observe dental patients, the elderly, or some of those guys who pay hookers to dress them like babies.

It's not like wearing the bib was mandatory or anything, either. It's just that the potential cost of dry-cleaning my shirt in a foreign town outweighed the shame of temporarily looking like an autistic kid at a birthday party. At least the bibs were plain. In the terrifying moments before I sat down, I was picturing a smiling cartoon lobster, perhaps with a voice bubble reading, "Time to get cracking!"

Finally, the big moment served. I looked at my dinner, and he looked back at me, or at least he did until I had the sense to rotate my dish 45 degrees. The chef had artfully arranged him on a bed of steamed vegetables, wearing two lemon wedges almost like shoulder pads. So, I couldn't help but imagine my dinner was some kind of undersea football star. But his claw also resembled a baseball mitt. I was about to eat the lobster equivalent of Bo Jackson.

To my right was an assortment of tools that would have given Nazi scientists nightmares, including scissors, crackers, and tiny stabbers. My girlfriend, naturally, was too intimidated to dig in without some kind of example to follow. "Sorry for this, Bo," I muttered, and grabbed a claw and the cracking doohickey.

Splatter. Lobster detritus everywhere. I knew this sort of thing happened on TV and in the movies, but I was totally unprepared for the reality of it. Fortunately, I avoided most of the shrapnel. My girl, on the other hand, now looked like a Jackson Pollack painting, only with nicer boobs.

I knew it probably wouldn't be the last time she'd be wiping goo out of her hair, thanks to me. All the same, she was a pretty good sport, which is the kind of credit a fancy meal will get you, for the record. The waiter, of course chose this moment to stop by and point out that by making a few judicious snips, we could enjoy our dinners without flinging debris everywhere like an upscale Cookie Monster.

After our brief tutorial in crustacean-management, we settled in to enjoy our meals. I can't deny that lobster is tasty, but I kind of think food should be graded on a curve. I mean, lobster is almost always served with lemon and melted butter, and they're doing most of the work, taste-wise. I think I could eat a clump of deep-fried hair if it came with lemon and melted butter.

When I got through the good stuff in the tail and claws, all that was left was the squishy, pungent stuff in the lobster's…I don't know, torso? Midsection? Thorax? I don't want to hear from a bunch of angry marine physiologists. Anyway, I was assured this stuff was edible, but the wine and the multiple baskets of bread had left me feeling kind of torpid. Fucking free bread; our parents were right all along.

And speaking of parents, I had a feeling my poor lobster performance was somehow disappointing them. My relatives, I should point out, can fucking obliterate a lobster. All you'd hear is a slurping noise, and the next minute there's a greasy, demolished shell where one of Godzilla's enemies used to be.

Of course, this feeling of disappointment might have been the standard, ambient guilt that's always at the back of a Jewish person's brain. Hey, about that? A Jew feeling guilty…for not eating a lobster skilfully enough. There's a conundrum for the rabbinical scholars, right after they tackle the paradox of what to do with the gift of free bacon.

When the bill came I had to play it cool, which is not easy for me. My natural inclination would have been to shriek loudly, pretend to faint, and steal the cutlery when no one was looking. But I just calmly handed over my credit card. In my mind's eye, I wasn't buying two expensive meals; I was paying a fine for being the kind of idiot who indulges his girlfriend's stupid ideas. Somebody should stick a needle through my brain and save the damn lobsters.

It wasn't until we were at a packed bar later that I noticed my girlfriend had broken out in red splotches all over her face. Have you ever tried to determine the severity of a hitherto-unknown shellfish allergy while drunk and distracted by Celtic music? They don't teach you that at med school. She turned out to be fine, but the amazing lobster reward-sex I was expecting? It's funny how chicks who think they're in anaphylactic shock don't feel sexy.

I know it's hard to believe, but after college, there will come a time where you have to go on dates in order to get laid. When that time comes, stay the hell away from seafood restaurants. You'd be much better off, say, getting blazed with your date. If she complains, just tell her your crab-grass is better than her lobster-pot.

This week’s word might sound like a spooky entity right out of Charles Dickens, or possibly, Scooby-Doo. In reality, however, the ghost train is really more of a pleasant surprise to commuters everywhere. Literary conventions and mystery-solving Great Danes have little to do with it.

If you live in a big city and you’re unlucky enough to take a subway to work, you know that every day is a battle to find a seat, or even a square foot or two in which to stand without a twitchy freak breathing Doritos crumbs on you. But once in a rare while, a train will pull into the station totally empty (this happens to me about four times a year). Where did this train come from? Why is it empty? What’s that ominous mist? I say, chalk it up to the supernatural and just enjoy your seat.