Part 4 of 10 in a "Best Picture" dog/human conversational series.

Here's the next installment in a series of panel discussions in which I and my roommate's German Shepherd, Luther, review the ten films nominated for Best Picture this year at the Academy Awards. Today, Luther reviews David Fincher's The Social Network. 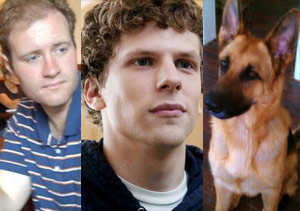 Luther: Arrooo?!?!! ("Welcome to the program. I've just been informed by our producer, Tim, that Charlie won't be joining us today. Something about someone taking a shit in his bed, I dunno…weird. Anyway, not to worry because we're still going to do the program without him, and honestly I think I'm going to feel a bit more free to, like, be myself without Charlie constantly trying to sound like the smartest person in the room. So without further ado, I present our review of David Fincher's The Social Network.

Yes, Charlie still gets a bit of a say, because unfortunately he was able to email some comments on the film that I've been asked to read for you before I get to weigh in. Here goes:

Luther: Every inventor experiences growing pains, and Facebook was no exception. It gives me hope for "The Poo Poo Pot." Maybe they'll make a movie about me someday… "Despite the dubious accuracy of the plot and the events surrounding the creation of Facebook, The Social Network blah blah blah frightening and calculated bullshit bullshit bullshit fantastic performances by Jesse Eisenberg and Justin Timberlake gay gay gay screenplay by Aaron Sorkin…"

And it kind of just goes on like that for three pages. Basically he has a big ol' hard on for the movie and he wants everyone to know it. Honestly, I thought the movie was just okay. I think movies, especially ones surrounding actual events, should teach you something, and while The Social Network certainly set out to school me, it really only taught me two things: 1) If you want to make billions of dollars, invent Facebook, and 2) Don't date Asian women. They will ruin your life.

…My producer, Tim is shaking his head at me for some reason…oh yeah, your girlfriend is Asian, isn't she, Tim? What kind is she again? What's the one where they always sound like they're yelling whenever they talk? All of them, right? Am I right?

Oh, she's your wife? So my invitation must have been lost in the mail, right? Oh, no, wait, I do remember getting one from you. I just chose not to attend as a conscientious objector. Never forget what they did here, Tim, never forget. Tora. Tora. Tora. 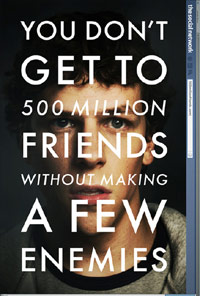 Okay, while Tim goes backstage to "cool off," I'll get back to the review. I actually dug The Social Network because it shows Mark Zuckerberg as both an inventor and an entrepreneur, a risk taker who thinks in terms of years, not in terms of months. I can really relate to that. I'm a bit of an amateur inventor myself. I came up with this product which is basically your average toilet seat, except the lid is made out of toilet paper itself. You do your business, and then grind yourself right up against the lid as you stand up, and boom, all the wiping is done for you, and will be ready for you the next time you have to number two. No more reaching over, unrolling the paper, wiping in that awkward motion, folding the paper, all the while putting undo strain on your wrists and back, only to have to reach over and do the same thing again once you realize your first attempt didn't remove all the residue.

Unfortunately, market tests showed that the product was both wildly unsanitary and prohibitively expensive, given that each "wiping lid" came attached to a plastic seat that retailed for $29.99. They were essentially single use only, especially since each "wiping" resulted in nearly 70 percent of the available surface area becoming both soiled and an ideal breeding ground for harmful intestinal bacteria. Women also objected to the product, as they found it awkward to have to turn around, inch forward, and grind their lady parts against the lid after going number one. This one really ground my gears. Do we wipe every time we drain the snake, gents? Didn't think so. Jiggle, ladies. It works wonders.

The point here is growing pains. Every inventor experiences them, and Facebook was no exception. The Facebook of 2004 and the Facebook of 2011 are two wildly different beasts, and Zuckerberg certainly experienced his fair share of trials and tribulations along the way. It gives me hope for "The Poo Poo Pot." Maybe they'll make a movie about me someday…

Alas, I'm bored, and to be honest I just found out I can lick myself, so…I'm probably gonna go do that for a few hours.

You ready, Tim? You done crying like a little bitch? I said I was sorry! I didn't? Oh…well I'm rearry solly! Oh, c'mon, you set me up for that! Alright, I'm leaving, so either you do this or we're just going to have dead air.

Alright, Tim has agreed to come on and read some more of Charlie's notes because, let's face it, I can't be bothered.")

Tim: "What makes The Social Network work so well is the fact that the movie is completely devoid of fat. The characters speak with great energy and Trent Reznor's soundtrack drives the film forward with a stressful frenzy that matches the Adderall and cocaine high of these teenagers who stumble, steal, and innovate their way through the creation of the world's preeminent communication tool. Mark Zuckerberg may not like the way he was portrayed, and I have no doubt that Eisenberg's Zuckerberg was nothing like the actual Zuckerberg, but that's actually too bad, because Eisenberg portrays him as kind of a badass: narcissistic, deceitful, and cold, sure, but there is a kind of nerd anarchy that pervades the film that ends up making it a triumph for the little guy. Zuckerberg and his partner, Eduardo Saverin, take down the god-like Olympian Winklevoss twins, and do so in spectacular fashion. It's lonely at the top, however, and eventually Zuckerberg and Eduardo find themselves on opposite ends of the deposition table, but the film is masterful in its ability to make you admire, despise, and pity this Zuckerberg all at the same time. One of my favorites this year, hands down."

Well, since neither of my hosts are here to close the show, I guess I'll have to do it. Tune in next time when Charlie and Luther (hopefully) review Disney Pixar's Toy Story 3. I may or may not be there.

Related
Why Working at the Hotel from “The Shining” was the Best Job I Ever Had
Astrid Johnson-Krause
Kid Review: Ranking the Carpool Options on the Block
Gregory Alesso
King Kong’s One-Star Tripadvisor Review of the Empire State Building
Joe Moore
The Paris Review: Jason Half-Pillow, The Art of Fiction No. 501
Don Grapper
Resources