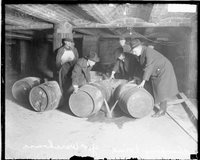 Me and the cops… we got an understanding. I know that if I mind my P's and Q's, then more than likely, I can go on doing whatever illegal activities I have planned and the fuzz won't bother me. However, in the event I screw up, or get careless, or smoke pot in the dorms, you can bet your bottom, top, middle, and inflated dollar that I'm gonna run into some kind of entanglement with the law.

Some people assume that because I drink heavily, then I undoubtedly (being underage) have been in trouble many times with the cops. In fact, the only brush I've had with the boys in blue that was alcohol-related happened a while before I got out of high school.

Me and a few of my friends decided to head to Raleigh (I was raised in Durham, about 25 miles away) one Saturday to check out the Dixie Gun and Knife Classic, an annual gun and knife show that goes down at the North Carolina state fairgrounds. After we had our fill there, and I made the brilliant decision of stealing about 100 dollars of merchandise from vendors who had, at any given time, at least fifty handguns and twice as many sharp blades within arms reach (let it never be said that I'm not a) morally corrupt and b) a complete jackass), we decided to call up my brother to procure us some spirituous beverages. He was at an NC State basketball game, so he gave me his buddy's number, 'cause he's just that kinda guy.

We called up the friend, went to the local ABC store, and got three fifths of vodka (for my uncouth companions) and one fifth of rum (for my uncouth me). Dropped the guy off at my brother's apartment, got about a mile down the road, and saw a few flashing lights in the window.

Praying this was a traffic violation, my buddy Alex pulled over on the nearest side-street and I hid the brown paper bag as best I could, which at the time was between my legs in the seat of his Jeep. The officer came up to the window, informed us that he was there for the liquor (he had an ALE badge to prove it), and asked for the bag. I cradled the bottles in my arms as if they were my own distilled children, and he had to ask me three times to hand over the goods. We got our tickets and headed on home, worried about what was going to become of our four friends who were now in the hands of some fascist teetotaler instead of in our loving care. I'll never know what happened to our potential chums, but I hope they're in a better place. Like waiting for a hobo to find in a ditch after that Nazi bastard flipped his unmarked car on a dark side-street, no one to hear his screams of agony as he was slowly burned alive.

It was at this point that I began to resent not all law enforcement, but the ALE.

Sure, we should have parked somewhere that we had a clear view of who was sitting in that ABC store parking lot. Sure, we should have been more cautious, seen that we were being followed, and let our friend take the liquor inside for us to come pick up later when the heat was off. Sure, when pulled over, I should have yelled “IN FOR A PENNY, IN FOR A POUND!” and started downing the liquor two bottles at a time until I was dragged from the vehicle, shouting that they'll never take me alive and for my friends to never forget the cause.

But most of all, I just hate the ALE. I hate everything they stand for. I hate that North Carolinian tax dollars are going towards an organization and a law structure that is only held in place because states don't want to have federal highway money pulled from their budget. I hate that, though it doesn't apply to me, those who go to war and fight on the front lines for our country and risk their lives are denied entry to a bar until they're 21. I hate that the government seems to think that the responsibility to vote, a much more dangerous tool in the wrong hands, requires less maturity to exercise than the ability to legally consume alcohol.

So, whenever you crack that next beer, remember two things. If you're of age, thank your lucky stars that the feds haven't jacked the age up to 25, 27, or 30, probably because they haven't thought of a new bill to tack it onto yet. If you're underage, realize that our forefathers chose to rebel against an unjust system, too, and it ended up netting them a great nation, ensuring liberty and justice that has been protected by millions of brave men and women for over 230 years.

Too bad they some of them can't toast a drink to that, though.