The Courtside of Tennis 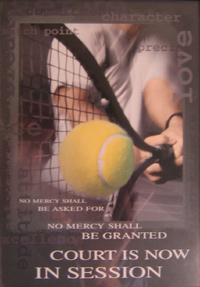 I play a lot of tennis. Been playing since I was about 6 years old actually. I like to think that the game kind of personifies my values, since it's more than half mental, requires strong individual resilience, and equates the word “love” with zero. But those aren't the only peculiarities of tennis, and my lifelong association with it.

Allow you to indulge yourself. (Ok.)

-Other than the time my neighbor fingered me in the “letters to the editor” section of the local newspaper for having a high school party that was both too loud (outdoor + a DJ) and too late (2am while my mom schmoozed with the police in the driveway), it's probably the only reason I've ever been in the newspaper. Ok, that's not true, but believe me YOU, journalists aren't scared to explore the pun possibilities of my name. For instance:

“Holding Court” – A lovely frontpage sports section dissertation on my awesomeness and how I was all-metro MVP (Most Valuable Playa). Should have also included a post script from all my ex-gfs on how awesome this feels.

“Supreme Court Rules Junior Open” – Another testament to my winning awesomeness, this time bolstered by an allusion to the other ultimate body of authority.

But seriously, can you even BELIEVE the amount of ego boosting pun titles my name lends itself too??! It's really not fair…how much I rule.

-Tennis uses the word LOVE as a score. How degrading is that to love? I bet love would take offense…if it had a voice (all my ex-gfs). Love is literally the worst score you can have. Every time love is mentioned, it's reputation takes a shot…preferably from my backhand. And I mean that in the most domestically abusive way possible. Today, at the beginning of the second set, my opponent actually said “love all” when calling out the game score. I mean, “zero zero” maybe, or “second set,” but LOVE ALL? That's like some hippie shit right there. Which is funny, because then he passed me a blunt.

-Other than the time I fingered my neighbor while her kids were at school…hmm, nevermind, tennis doesn't really play into this point, it's just about me getting play.

-Do you know how many times I've had to field “balls” jokes? Probably almost as much as Dan fields OPP jokes.

“Hey, are you going to play with your BALLS?!! AHAHAHAHA!!”

“Why don't you go stroke some BALLS with your faggy tennis friends! OMG, THEY SHOULD MARKET ME AS A LAUGH MACHINE!!”

“Do you have any BALLS? I BET YOU DON'T!! DUDE, MY ORIGINALITY LEVEL IS AT AN ALL-TIME HIGH RIGHT NOW!”

“How many BALLS do you have? THREE?! AHAHAH WHAT A FREAK!! I really should start my own comedy club…how much do you think that costs?”

-Tennis is a gentleman's game, and that's what makes it that much more fun and ironic when people suddenly erupt into vicious strings of vehement vulgarities and vivacious ummm…vandalism. Like when I get mad, I love to drill a tennis ball at the trash can attached to the net. It's weird though, because people will do all sorts of crazy shit when they get pissed, but as soon as you throw your racquet, everyone labels you a “poor sport” or a “whiny baby.” Sometimes I feel like I could hit my opponent in back of the head with a tennis ball after a point, and people would go “OOOOO, YA! GET ‘EM!!” But if I accidentally dropped my racquet after that, all the rowdy encouragement would turn to scolding whispers and disapproving expressions of shame from the crowd. And believe me, I DRAW A CROWD. (Wow, really, with the ego…)

Some of my favorite things to shout on the court include:

“GOD BLESS AMERICA!!” Strange, I know. This is my favorite, I guess because there's some sort of redeeming sportsmanship factor in patriotism that you can't deny. Plus, it completely baffles opponents.

“SON OF A….BITCH/SHIT/MMMMM!!” The last one being when I decide to hold back in light of children/referees.

“FUCK. SHIT.” Simple, to the point. Usually after a long, mentally draining rally.

“GOD YOU ARE SO STUPID,”

“REALLY? IS THAT HOW YOU PLAY TENNIS? GOD YOU ARE SUCH AN ASSHOLE,” and the ever-sarcastic,

“WOW, WOULD YOU LIKE A SNO-CONE WITH THAT? HOW BOUT A HAMMOCK? GET A FUCKING LIFE DUDE.”

-Wouldn't it be funny if courtside cheers were dubbed “tennis racket”? I've got plenty more ideas that will never make money if you're interested.

-Puns aplenty. Can you imagine if you played a shitload of tennis, and your name was COURT. I can. But you'd be surprised, I hear balls jokes more often than I get first impression comments from opponents about the irony of my name. Most people want to know if my parents played tennis. The answer is yes. But in case you didn't know, my full name is Courtney, and it comes from my late grandfather, who didn't play tennis. Though I'm sure he's still rolling in his grave over the situation. He was a funny guy.

-Speaking of puns, the greatest pun opportunity of all time came in high school when I was forced to forfeit my tennis match to settle up a reckless driving ticket downtown. Immediately passed around to spectators confused by my departure was: “Court had to leave the court to go to court.” It doesn't get much better than that, folks.