The Unavoidable Sexual Plight of Man: Would I Bang Her?

Every man must answer one internal question when he encounters a woman.

Men are fraught with a psychological condition. An exhausting mental burden that is impossible to shake. The average Joe may appear to be contained on the outside, but on the inside he struggles with the cavalcade of sexual thoughts manifesting in his consciousness on a daily basis. Unavoidable, it is a natural mechanism that triggers in the mind, and although it can be contained, there is no way to turn it off, ever. Males do not outgrow their imaginations; rather, it becomes dominated by the onslaught of perverted scenarios initiated by the observation of other women. 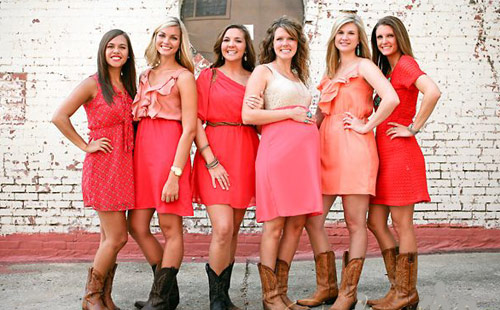 It all starts with the way men are wired. Anytime a man gets a good look at a woman he's never seen before, there is an involuntary question he is forced to ask himself: Would I bang her? This is not a choice, but rather a deep seated evolutionary mechanism. Don't believe me?

Well, it goes back to the hunter-gather days, when humanity's dominance of the Earth was first forged. The skill that defined the male sex was the ability to hunt. For thousands of years our very survival depended on it, thus becoming instinctive, seared into our train of thought. We learned to apply this hunter mindset to all aspects of our lives, and so it is still very much engrained in our psyche today. For instance, when we are at a nightclub or a bar, it becomes a hunt, and when we spot a herd of prey we have to quickly decide which hog to go after.

Do I have a good chance of catching it?

Should I attack it head on?

Or maybe I should wait for it to separate from the herd, and then track it to its domicile and set a trap…

But seriously, there isn't a man in the world who couldn't walk into a room full of women and without hesitation look at each one of them and say: Yes. No. Yes. Yes. No. Maybe if I was drunk. Yes. Hell Yes. No. Oh, and by the way, "Maybe if I was drunk" really means "Yes" but we're just too ashamed to admit it to ourselves. To a hunter, a mediocre meal is still better than going hungry.

Regardless of whatever weird distractions might be going on, we have the skill to automatically determine Would I bang her? before anything else. It doesn't matter if the woman is a midget, if she's dressed like a clown, if she has no legs, or if she's a no-legged midget clown (if there was such a thing) rolling around on one of those wheeled contraptions dogs get when they're missing back legs. It doesn't matter. Our primal instincts first decide if she is "hunt-able" or not. Don't believe me?

Well think about it…even if you wouldn't have sex with the girl, the only way you can make that determination is by first picturing the act. It's the same concept when people say, "I don't care what other people think"—you can't say that without first considering the person's opinion. But seriously, who wouldn't want to have sex with a no-legged midget clown on wheels just to say they did it? No one could ever top that story. You could have sex with her without ever getting tired by just wheeling her back and forth. Maybe even get a ramp for the bed.

So ladies, remember this when you're on a job interview: sure, the gentleman behind the desk is going to assess your character, your personality, and your potential to fill the position, but long before any of that, as he was shaking your hand, he had already decided whether or not he'd like to ram it up your box right there on his desk. And hey, if you get the job you probably know the answer.

It's so bad that all we really need is a visual representation of a woman and the sexual indicator goes off. It doesn't even have to be a real woman; it could be a cartoon or a mannequin, even a torso mannequin. We'll just imagine the rest. I mean is it really any surprise that a man wrote and directed the movie Mannequin? He was just like any other guy walking through Macy's when a curvy mannequin with some lingerie on caught his eye and he thought to himself, "Damn, if that mannequin could come to life, I'd fuck it…." LIGHTBULB!

Now these brief thoughts are not necessarily going to happen in reality, but there is a hypothetical situation in our minds where it would make sense. For example, when I first saw the movie Who Framed Roger Rabbit?, I thought, well if cartoons could cross over into real life like that, I might wanna bang Jessica Rabbit.

Can you blame me? The plot of the movie is that Roger Rabbit hires a private investigator to find out who his wife, Jessica, was playing "paddicake" with. They should have called it Who Fucked Jessica Rabbit? I mean what kind of grown-up character is that for a kid's movie anyway? A big-titted, slutty, half-naked lounge singer who fornicates with a rodent? Not even a respectable animal like a horse or a donkey, but a fucking rabbit. That's cartoon bestiality for Christ's sake. So you see, that is an animator with years of repressed sexual urges coming out on his drawing board; a build-up of sexual frustration way beyond normal sex and at the level of Toon-Beastin.

Regardless if a man is married, single, old, young—you can bet he has to deal with this mental struggle. And you know how this is true?? Because every guy jerks off constantly.

Guys jerk off even when they're getting laid all the time. Especially when they're getting laid all the time. Men don't jerk off in lieu of getting laid, men go out and get laid so they can have more shit to jerk off too. Any man can you tell he gets way more mileage out of the hottest girl he ever had sex with than all the other slam pigs combined. Our lives are toiled by the constant obligation to replenish the spank bank, as we must continue to nourish our instincts. Forget about chocolate or alcohol, try giving up masturbation for Lent; the only reason being nailed to a cross might be worse is because you wouldn't have a free hand.