I add you because you're my friend.

Then I add her because she knows my friend, and we met at a party.

Some girl with no teeth kept eyeing me at that party. We didn't speak, but she caught my name and added me. I add her brother because he likes cool music. The brother has a friend who adds me because I look a bit like his Uncle Norman. His Uncle Norman adds my brother because he likes younger men. My brother adds this blonde girl because her tits are hanging out in her picture. The girl in the picture adds Laura because Laura likes the girl-in-the-picture's boyfriend, so the girl in the picture wants to keep an eye on her.

Meanwhile, Laura deletes Mike because she's sleeping with Mike, and doesn't want to make it obvious to her boyfriend, Daryl. But Daryl doesn't mind because he's just joined a group called "Bondage & Potatoes." Strangely, in that group he finds an old elementary school friend named Ross. Daryl and Ross chat extensively about their memories of farting during silent reading at 2pm when they were 7.

One week later Ross sees Daryl in the street, but Daryl ignores Ross. However, Ross doesn't ignore Tania in the grocery store, so he adds her. But he doesn't talk to her; he only wants to look at her pictures. Tania doesn't mind because Tania is an attention seeker who adds everyone. She has 784 friends. 782 of them are the type of people who add people for no reason, which is pretty much the same reason they're living. The people with no reason for living stumble around life wondering what the hell they're doing. In an attempt to find out, they join three groups: "The Year 1989 Appreciation Society," "I've slept with someone through a modem," and "If this group gets 10,000 members I won't attend my funeral." 37 people join this group. 11 of those leave the group two months later when they think the person who invited them won't notice them leave.

But Rajbad from India does notice that Melanie has left his group, and he's not impressed. Rajbad therefore changes his status to "Rajbad could tear Melanie a new asshole if he wasn't so upset by what she did." Melanie is unaffected, since she's in England and not on Rajbad's friend list. Rajbad decides to commit suicide, but nobody attends the funeral since he'd made the bad decision of deciding to set up the Facebook event afterward. 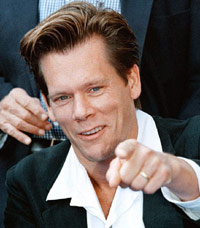 Kevin Bacon wants YOU to be his Facebook friend. Six degrees don't build themselves, brotha!Meanwhile Melanie uploads some pictures of the time she went clubbing with Jenny and Samantha on a Thursday; they're all completely shit-faced in every picture. Melanie is really hot but Jenny is dog ugly. Melanie rubs it in by saying "oh my gawd Jenny you are so hot in this picture." Jenny feels bad because not only was her ugliness captured in a picture but Melanie called her "hot" which at best could be called sarcastic, at worst, fraudulent. Samantha, on the other hand, makes up for her obesity in the pictures by wearing the trendiest clothing. Unfortunately, the expensive outfit is overshadowed by her fake tan which may indeed be radioactive. Melanie is clearly insecure about her great looks, while Samantha is naturally embarrassed by her heft and Jenny is so ugly she just wishes it was called "Namebook."

Samantha finds refuge in a man named Eric who added her as a friend at 1am. Eric's never met Samantha, but he did know a girl in Israel 9 years ago with the same name, so he added her just in case it was the same person. It wasn't, but Eric's quick wit earns him a friend add. They decide to meet, but Eric is worried because all his pictures are in black and white and feature only his good-looking side. So he postpones the meeting and instead tags her in a picture.

Suddenly, I realize the knock-on effect I've had on the world.

I delete you as my friend. You no longer exist.

Nothing happens. I realize my life is utterly pointless. Life has truly reached that decision where I have to do the unthinkable. I log off.