Well this should go exactly according to plan.

The Cleveland Noble Savages have just defeated the Jackson City Quadroons 116-110 in Game 1 of the Offensive Team Name Basketball Association (OTNBA) Championship Series. "No Shoes" Jackson, DeQwondarius the Magnificent, and Coach McCoacherson have taken their respective seats for questions. The following is the transcript from the Quadroons' post-game press conference.

No Shoes Jackson: Before we start this press conference I'd like to thank God for giving us the strength to go out and compete today. When I first prayed to Him I believe He told me He was on His way to Syria to blow up a school bus full of children, so for Him to take two hours out of His busy schedule for this literally meaningless game of basketball means a lot to us. I'd also like to give thanks to Chaac, the Mayan god of rain and water. We sacrificed a virgin for him before the game, but judging by the outcome I think we should have sacrificed two virgins. Now, questions? Yes, pale white man. 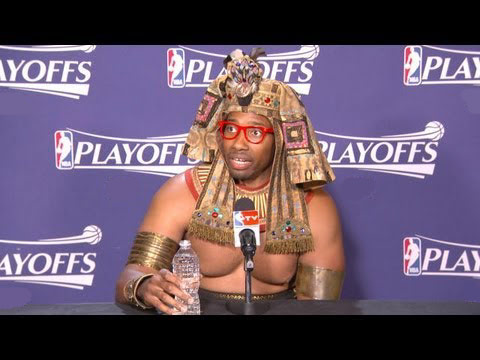 No Shoes Jackson: Well that's definitely something that's on the table. Right now we're reviewing all our options, and even reviewing other people's options. But we won't be abandoning our identity; scoring fewer points than the other team has worked well for us in the past so I don't think we're going to remove that element completely.

Reporter 2: What does that even mean?

DeQwondarius: It means next question.

DeQwondarius: No one cares who you are.

Reporter 3: Yes sir, sorry sir. Your Magnificence if I may?

Reporter 3: Remember that one play where you, like, grabbed the ball and you were, like, going left then you did this really cool spin move and you were going right and then you jumped up, like, really high and then that dude was coming at you but you were all, like, "Rarrgh!!" and, like, dunked? And then everyone was all, like, "Ooohhh shit damn!" Remember that?

DeQwondarius: It's hard to say for certain. LSD has pretty much destroyed my ability to form new memories and retain information.

Reporter 3: Oh. Ok, well, uh, it was super cool. Thanks for dunking and stuff.

Coach McCoacherson: Any questions for me?

Reporter 1: SIT THE FUCK BACK DOWN.

Reporter 4: This question is for No Shoes Jackson. No Shoes, will you ever wear shoes during a basketball game?

No Shoes Jackson: No.

Reporter 2: A tangentially related question: is there any truth to the rumors that you will be traded to the Broadway run of Cats once the season is over?

No Shoes Jackson: While I believe Cats is the most purr-fect show on Broadway I'd rather focus on winning this series before talking about any trades. Meow.

Reporter 1: DeQwondarius there has been—

DeQwondarius: It's DeQwondarius the Magnificent. You need to say the whole thing. Your Magnificence is also acceptable.

Reporter 1: DeQwondarius the Magnificent, there has been some talk of the aggressive play both teams are known for and how this might be bad for the league. In the first quarter you were given a technical for stabbing Cleveland's Derrick Mulroney to death. Is this the type of aggressive play we can expect for the rest of the series?

DeQwondarius: Well, I'm a competitor. When I go out there I do anything and everything I can to make sure we win. Sometimes that means crashing the boards, sometimes that means using a sharpened toothbrush to kill another human being. If it means a W then I will gladly murder every single one of those guys. Hell, I might even murder some of my own teammates.

Reporter 3: Is that why Coach McCoacherson is currently bleeding, Your Magnificence?

No Shoes Jackson: Y'know let's not get into who stabbed who, ok? The fact is that every team could use a DeQwondarius when they—

No Shoes Jackson: Apologies, Your Magnificence. Every team could use a DeQwondarius the Magnificent when they step onto the court. When you're playing for a national championship every cartoonishly unhinged lunatic in your locker room brings you one step closer to victory. Now if you'll excuse us we need to get Coach to a hospital.