A magician never reveals his secret, even under oath in a court of law.

The plaintiff can ask all the questions they please, but I must apologize because I may not be able to answer every one of them. You see, I am a magician, and as we all know a magician never reveals his secret. I may be under oath here in this courtroom, but thirty years ago I took a much higher oath at Harry Houdini University, and I have no intentions of breaking that oath for another.

Whatever the jury's decision may be, I am going to hold true to my Magician's Oath.I have been asked how the woman ended up dead in a motel bathroom in a room under my name, Tony the Magnificent. But as I have said before, I cannot give out this information. If I were to divulge this secret it would take away from the wonderful illusion that I have pulled off. The audience's sense of wonder would be gone, and the magic of it would be ruined.

If I were to tell everyone here in this courtroom my secret, then I would lose my edge in the highly competitive magician's market. Other magicians, like those magic-less clowns over at Copperfield State, would start taking my act and using it as if it were their own. And seeing as this is the first time I've ever received any real press for one of my illusions, I'm not going to just share with everyone the method to my magic. That would be a poor business decision on my part. 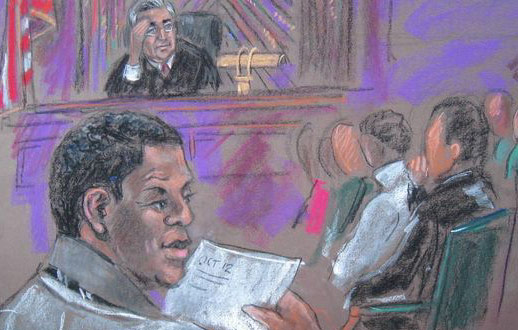 "Is this guy serious right now? Or am I on some sort of Judge Alex Candid Camera?"

I'll admit, I do understand your curiosity for the inner workings of my illusion. As a boy I can remember watching magicians and needing to know how they performed such a thing. It made me realize there was more to life than met the eye. That curiosity filled me with so much passion, and it made me into the magician I am today. I do not want to take that away from any children who feel the same way about the illusion in question.

There is no doubt that my illusion was a tough one to perform. It was not an easy feat to enter that room with her around one in the morning, then several hours later to be found halfway across the state with her back in the motel bathroom dead. And with no evidence as to a cause. That's top-notch magician work right there.

Of course, I cannot take all the credit for this. It would not have been possible if it weren't for my lovely assistant, Rose. It was she who picked me up and drove me to the point where the Highway Patrol officer caught us. And she did all of it while looking so lovely in that sparkling red dress of hers. Rose deserves just as much credit as I do. She definitely earned it.

So as you can see, I have no intentions of releasing the inner workings of what may be the greatest illusion ever performed. Whatever the jury's decision may be, I am going to hold true to my Magician's Oath. But please, I must ask you, do not send me to prison. The last time I did the whole "escape from a locked room" thing, the key I swallowed gave me terrible intestinal pain and my doctor recommended that I don't try that trick anymore.

Related
It Is With a Heavy Heart and Definitely Not Under Legal Pressure That I am Closing My Billy Joel Themed Strip Club
Andrew J. Michaels
Death Stars Must Be Legalized for Private Ownership
Rick McDermott
Useful Legal Guidance for the Innocent
Margo Bartlett
Dear Batman: Please Park Legally
Danny Dalah
Resources