Hi everyone. My name is Kristian Zane Jackson. I'm mostly an international male model, but I do a lot of other cool stuff, too. Anyways, I have been modeling all over the world and have been able to meet some really cool people. Some of them have opened my eyes to a world I never knew about. Since people know me from my modeling, I thought they'd also like to hear about what I've learned about life, too.

Whether it's relationships, life after death, or a better understanding of the Universe, I think you'll like these three cool ideas I picked up from modeling all around the world.

The Law of Attraction

A lot of people think I'm hot, so naturally they want to hang around me all the time. Agents, designers, celebrities, photographers, artists of all kind, business people, fans; they are attracted to my modeling work. This makes them want to hang out with me, which is really cool.

Maybe modeling is the last thing my spirit needed to experience, which means I could experience Nirvana at my next photo shoot or something.The problem is the Law of Attraction is more than hanging out with people you think are hot or cool. What people don't know is you can easily hang out with people who are not hot or cool. This happens when you put out vibes like, "I don't think I deserve to hang out with hot and cool people." Well guess what? The hot and cool people pick up on those vibes at a subconscious level, and they'll decide not to hang out with you. Instead, you have to hang out with mean models like Carmen St. Jane or James Guy, who may be hot but definitely not cool.

Just remember to always think positively, so you can hang out at a cool people at night clubs like MOON or the 14th Street Warehouse. You'd like MOON. It's really cool. 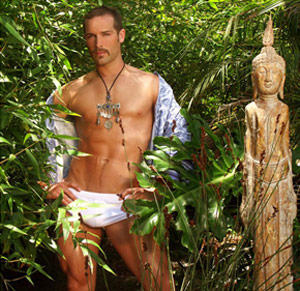 A lot of people I'm friends with are afraid of dying, mostly because they don't want to lose all their cars, houses, cool clothes, money and VIP status. They're always surprised to hear me say I'm not afraid. "Why aren't you afraid of dying, Kristian?" they always say, and I always say back, "Because I believe in reincarnation!"

I have gotten to know a number of different shaman and Eastern philosophers from modeling in poor villages all over the world, and one of the things I've learned is the soul lasts for eternity. No matter how many crunches you do or diets you go on, your body will die, but your inside spirit will not. It will keep coming back into new bodies looking for different life experiences until one day you reach Nirvana.

For example, my spirit really needed to learn everything there is about international male modeling. Since I'm really good at it, there probably won't be a need to come back as another male model. Maybe it's the last thing my spirit needed to experience, which means I could experience Nirvana at my next photo shoot or something.

Also, off topic, speaking of Nirvana, I once partied with the band back in the early 90's. It was really cool.

We Are All One

This is one of my favs. It's like, I am you and you are me, which a lot of people say they wish they were me because I live such a cool life. But sometimes when modeling gets really hard (or boring), I want to be someone else. I start to think about really switching places with someone, but I don't have to! You know why? We are all the same!

You see, the idea of "we are all one" is a lot like being on one of my fashion shoots with my favorite photographer R0DRIGo (the first "o" is spelled with an actual zero). Think about all that goes into one of our shots: me, maybe a beach scene, whatever cool product they want me to model with, a couple other models in the background. There's a lot of stuff R0DRIGo has to shoot, but in the end there's just one picture.

When I say "we are all one," it's like the Supreme Being is the cool photographer and he (or she) is taking a picture made up of everything with a time exposure of eternity! Everything in the Universe is really just one thing! I think that's really cool.

Kristian Zane Jackson is an international model, actor, author, humanitarian, part-time activist and Buddhist. He owns a 16-acre self-sustainable Earthship in Lhasa, Tibet, where he lives with his dog Cody and his cat Max.