If the US Had Defaulted on Its Debt

Tim Cook, in taking over for Steve Jobs as CEO of Apple, the most successful company on Earth, reveals a startling revelation about what would have happened had we defaulted on our national debt. Tim ran a complex computer simulation developed by Apple but executed on a Windows machine. Here's the result.

Obama tells the rest of America (Krazy-glued to network soap operas) that "due to the failure of a consensus on raising the debt limit, and despite my urging to get this done, all Americans now need to brace for trouble ahead."

The stock market encounters an iceberg and plummets 950 points in the first hour, amid partisan scrambles to rearrange deck chairs. Interest rates climb three points before lunch at Subway. The Fed's credit rating slips from AAA to ADD. Nonetheless, VH1 and ESPN air their Top 100 hits (and Hitters). But these are not seen by the more than 8 million video game players now permanently tuned into their own alternate reality (along with NASCAR fans, who believe roaring around in circles burning the remaining fossil fuels constitutes real answers for America's lack of sane energy policy). 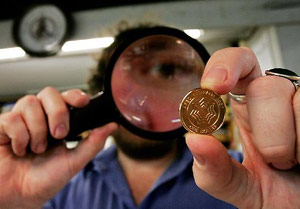 A U.S. regulator inspects an Australian gold coin for signs of life.Gold moves to $4780 an ounce before lunch at Ramen Cafe. Russia calls for the World Bank to make the ruble the standard currency of exchange. Ralph Nader predicts he will win the presidency. Ron Paul says "I told you so," inciting gasps of shock and awe. Thirteen senators and congressmen resign, revealing plans to move to Australia, confessing that they have secretly been investing in gold panda coins while waiting to raise the debt ceiling.

A Million Woman March is organized Oprah and the AARP, threatening to take back America from the "weak-minded good old boys who couldn't pass a parked car, much less a math quiz." Markets respond by skyrocketing 250 points (after an earlier-in-the-day plunge of 814 points).

Swan dive suicides in China mount before observation decks are locked on the upper floors of the Shanghai Financial Center. Meanwhile, on Wall Street, markets begin to level off around 5000 when it begins to dawn on investors that, as candidate Trump puts it, "This is just what we need to change our attitudes toward production and education." Adjusting his hairpiece, however, Trump then announces a new Washington reality show he and Mark Burnett are producing titled "You're All Fired." Co-hosted by Hell's Kitchen fanatic Gordon Ramsay, the show promises spicy recipes for disaster unexpectedly catered to political strategy sessions (with a twist of lemon).

Defense contractors request $1.2 trillion in cost overruns involving the latest laser-equipped robotic attack hovercraft "desperately needed" to combat backpackers from Syria. For the first time in history, they are denied.

Americans celebrate Christmas by pulling out of all wars, including the drug war, and purchasing Apple's new Reindeer operating system.

On a related note, Steve Jobs, upon his departure from Apple, issued a final video statement on Bill Gates. He stressed that this would be his last comment on his archrival.

Related
I, The Scarecrow from Oz, Would like to Return My Brain in Exchange for Canceling My Student Loan Debt
Risa Harms
Choose Your Own Adventure: Student Debt Forgiveness
Katie Talay
Resources