I am the Mysterious "6th Beatle"

You can find me playing kazoo on that unreleased song from "The White Album."

The world knows George, John, Ringo, Paul, and the apparent nine "5th Beatles." But they've also heard about the "6th Beatle." Well, allow me to introduce myself: I am the 6th Beatle. My name is Henry J. Bradleighman, and I was born on February 17th, 1939 in Dhaka, Bangladesh.

My parents both neutered dogs professionally. It was not the job with the highest income, but at least they were happy. In fact, they had the second largest family run dog neutering business in both the Western and Eastern hemispheres, respectively. For those of you who are interested, or may have visited it, it was called The Neuter Hut. They have now sold their company and are happily retired and living in Augusta, Maine. They rent a room in the back of a Fire Alarm shop called "We'll Light You Up." The owner of the shop is a nice man named Lindsay. 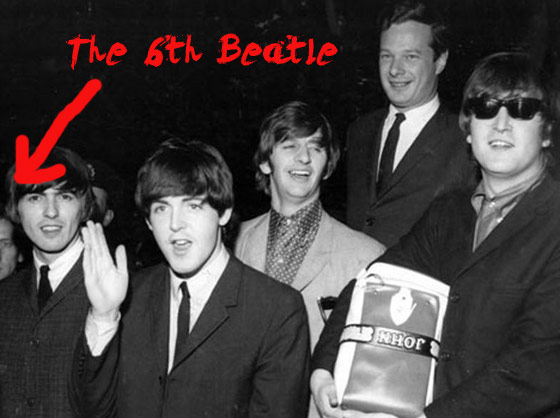 I currently reside in the quaint village of New York City, New York, or Manhattan. Or The Big Apple. Or Nueva York. Or The City That Never Sleeps. I am a molder of minds at the Horace Mann School. I teach music to 9th and 10th graders and have only had 31 students fail a class of mine. If you or a loved one is interested in enrolling at the Horace Mann School or taking private lessons in music from me then please feel free to contact the school's registrar, which I am not legally allowed to include in this work of non-fiction literature.

By now you're probably wondering what it is I did for The Beatles. Well, I played kazoo on an unreleased song that was supposed to be a bonus track on The White Album. But Ringo said it didn't flow well with the song and I was forcibly removed from the studio.

As a professional kazoo player, I was used to rejection. All I wanted to hear was Christopher Walken telling me he needed more kazoo. But life has a way of gently tapping you on the ass with one finger and every time I felt like I was getting close to signing a deal with Kazoo Records International or Def Jam or Death Row Records, it all sort of seemed to tumble and spiral out of my control. I eventually turned to support from my friends and colleagues at the NAIK (National Association of International Kazooers).

I fear for this generation of kazooists. I warn you: do not go into the entertainment business looking to make it big. You will be shot down, time and time again. But all it takes is one chance, one shot, one moment for you to be noticed by the one studio executive who appreciates the art of kazooing as much as it used to be appreciated. I remember the days of Elmer Young-Jones, the greatest, most commercially successful Kazooer of all time. They called him the Dylan of Kazooing.

I consider myself a member of The Beatles. Without me, the song that nobody has ever heard would be a disgrace to music. It would be a heinous excuse for a song. But with the kazoo, it turned into a magical musical experience. It's just a shame nobody will ever hear it.

Related
If Ghosts Aren’t Real, How Do You Explain the Eviction Notice That Mysteriously Appeared on My Door?
Ryan Ciecwisz
Attention All Mysterious Creatures: Please Come Forward
Lenard Welsh
I’m a Mysterious Gypsy Princess in 1830s Paris; Uncover My Secret and Win My Love
Will McDonald
FAQ: How Our Company Will Change Under the Leadership of the Mysterious, Cloaked Men
Jon Plester
Resources