The "cowboy cop's" collateral damage you never knew about.

Once the recipient of the Fritz Haber Medal of Excellence in chemical engineering, Heinrich was called many things in the weeks following his untimely death. Some called him a thief. Others, a terrorist. Some even went so far as to refer to the MIT educated chemist as a cold-blooded killer. I simply knew him as Dad.

My father, described as "a didactic man with a kind heart," was the first member of our family to fall victim to the trigger finger of Officer John "The Cowboy" McClane. The Nakatomi Plaza job was to be to my father's first and last working as an explosives expert for Hans Gruber, or, "Uncle Groobs" as my family once knew him. With two fatal shots fired directly into his chest, John McClane and his unregistered Walther P5 pistol made certain that Dad would never work another day in his life.

An off-duty New York City police officer, McClane was in Los Angeles visiting his estranged wife, Holly Genero, an accounts manager working for the Nakatomi Corporation at the time. McClane and Genero attended a Christmas party in the Nakatomi Plaza that evening, a party that my father and Uncle Groobs would eventually crash.

While Hans Gruber was technically not our uncle–or even a blood relative for that matter–he was still every bit a part of our family. Forming a friendship during their youth as members of the West German Volksfrei movement, Dad was the first to follow Hans out when he was excommunicated from the regime for being "exceedingly violent."

As a reward for his loyalty, Hans helped to financially supplement my father's college tuition, which eventually led him to receive a Fulbright Scholarship to continue his chemical engineering studies in the United States at MIT. In other words, just about all that my father accomplished in the world of academia, he owed to Uncle Groobs. 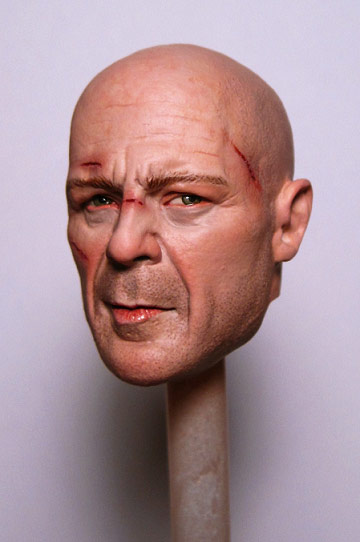 In the spring of 1983, with Dad well on his way to earning his doctorate, our family was hit by a pernicious stroke of misfortune: my sister, Nadia, my parent's eldest, got sick. Living in Cambridge at the time, none of us quite understood what HIV even was, me especially, as I was a boy of only three. We moved to California that summer, as San Francisco was said to have the finest community-based clinics in the world.

Leaving school a mere three credits shy, Dad forfeited his chance to attach a prestigious prefix to his name. He got a job working for the state as a tectonic geologist, which paid him adequately, although not nearly enough to cover Nadia's hefty medical expenses. Just as Mom had done two months prior, Dad ended up having to take on a second job.

Dad knew it was wrong, but he was desperate. Christmas was coming up, and according to Mom, he couldn't bare the idea of seeing Nadia, my older brother, Vilhelm, and I wake up Christmas morning only to find pine needles under our tree. He would do anything to avoid that outcome, even if it meant breaking the law.

Uncle Groobs was explicit with my father's role in the heist, he would drive the stolen Pacific Courier truck and do nothing else—leave the gunplay to the trained professionals. Dad agreed, until he saw how carelessly Hans' demolition "expert" was handling the highly unstable C-4 plastic explosives. As an engineer specializing in vibrational spectroscopy, my father was no stranger to explosives; if this heist were to go off without a hitch, Dad knew he'd need to be the one who planted the charges.

The night of the Nakatomi Plaza heist came and went in a bewildering storm of fire, smoke and bullets. Failing to identify himself as a police officer amidst the chaos, John McClane shot my Dad twice in the chest, killing him before he hit the ground.

My father, described as "a didactic man with a kind heart," was the first member of our family to fall victim to the trigger finger of Officer John "The Cowboy" McClane. He would not, however, be the last.

Nobody took Dad's death harder than my brother, Vilhelm, who at sixteen felt it was now his responsibility—as the man of the house—to shoulder the brunt of the financial void left by my father's passing. Smart and resourceful, my brother recognized he wasn't old enough to earn the kind of money our family would need to survive, so in early 1989, he contacted a man who he knew could help.

Unlike the relationship I shared with Vilhelm, Simon Gruber never cared much for his cocksure younger brother, Hans. Split apart in their native country by the upraising of the Berlin Wall, Simon and Hans Gruber's rivalry came about early on in their youth. Vilhelm utilized this detail masterfully, guising his redemptive proposition to Simon in the form of a game: "Defeat John McClane," my brother said, "And you'll accomplish something Hans could never do." Six years later, in the Spring of 1995, the "Simon Says" ploy was set in motion at the Federal Reserve Bank in New York City.

I remember exactly where I was when I learned that my big brother had been killed. A sweet rhythm oozed through our stereo speakers, as the girls from TLC recommended that we "stick to the rivers and lakes we're used to" in lieu of chasing waterfalls. Vilhelm, along with his mentor, Simon, were both incinerated in a helicopter explosion. An NYPD officer serving a substance abuse violation fired the shot that took the chopper down. Once again, John McClane had blown a hole right through the center of our lives, acting as judge, jury, and executioner for a second consecutive time.

Three years later, as our wounds were beginning to heal, my mother died from a massive heart attack while she and Nadia were together watching a film. "There was something about that actor in Armageddon that didn't quite rub Mom the right way," my sister said. In her final breath, all my mother could manage to eke out was, "McClane…"

My intention for writing this was never to shame Officer McClane. In fact, in the years since my father, brother and mother's death, I've learned to forgive the "cowboy cop" altogether. Dad knew the risks when he got involved with the Nakatomi heist, just as Vilhelm did when he dipped his hands into the Federal Reserve fortune. Yet these two men laid down their lives in order to support something that John McClane never quite had: a family that loved him unconditionally.

My mother always claimed that I was more like her, affectionate and observant, whereas Vilhelm and Dad shared that same stubborn tenacity. There was, however, never a doubt who the toughest of us was. I still see my big sister Nadia regularly, visiting her Brooklyn apartment a couple times each month. Every time I'm there, she badgers me about why I haven't got a wife, teasing that I'm still holding out for my boyhood crush, Demi Moore. "Now there's a dame I'd kill for," I always say, and we both laugh.

You know not all heroes wear a badge and tote a pistol. You don't need to prevent a plane hijacking or stop a cyber-terrorist to be idolized. Sometimes, all it takes is waking up each morning, even when long ago a doctor said the previous day would be your last. That's where my hero's moniker came from, a name given to her years ago by my Dad. Now, all this time later, I must agree, "Die Hard" is the perfect nickname for my sister.