How the Internet Ruined Hot Dogs for Everyone

Food is out there, and it's going to kill you one way or another. 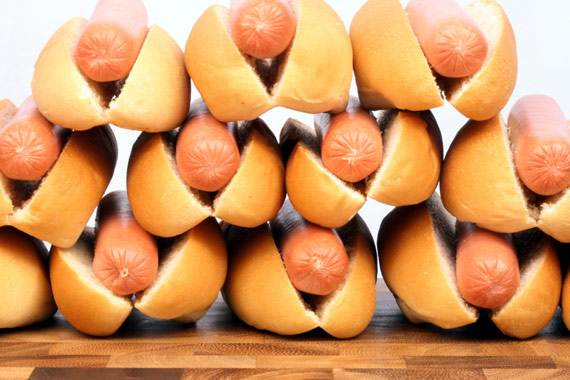 Online articles are the internet's primary weapon, and its ability to generate click-bait titles is masterful. With a few words in boldface type, the internet implants fear with surgical precision and tricks you into clicking on titles like "Common Mistakes Parents Make That Cause Their Children to Become Schizophrenic" or "Your Child is Dying! Quick, Click Here to Save Her Life." Without proper oversight, the internet will continue ruining everything we enjoy without restraint, even things as American as hot dogs.

My video finished buffering, so I didn't get to read all the details, but apparently, hot dogs contain a compound that can cause cancer primarily in children and pregnant women, the last two demographics of people you would want to get cancer!

Like many tired American parents, I often search out the quickest and simplest dinner options for my children, and I think it's safe to say that the hot dog is the undisputed champ of easy dinners. I can come home, fire up the grill, slap a few dogs down, and after five minutes plop them on my kids' plates and say, "Here, eat this red stick" and I'm done.

However, after learning about the hot dog's tendency to cancerify children's bodies, it seems they would be safer smoking than eating.

So I decided to read further into this hot dog controversy. What I found was that the increased risk of cancer only applied to people eating more than 12 hot dogs a month. That's the type of diet that might be considered child abuse. The type you only find in trailer parks.

A few months after hot dog's PR nightmare, America learned another "dark" secret about meat. This time, the internet informed us that the hot dogs' older, more sophisticated brother, the sausage link, is trying to kill us too.

On top of that soul crushing news, we were devastated by another bombshell: bacon, America's favorite meat/condiment/snack/desert/food/milkshake, is also a cancer-causing processed meat. The internet promised that bacon was working in tandem with sausage links and hot dogs to murder us, one delicious meal at a time. Again, the click-bait titles flourished:

When I discovered the news, I instantly dropped my bacon-wrapped, hot dog-stuffed sausage and swore off all processed meat, even my beloved bacon. A few days later, however, the World Health Organization tried to walk back the misinformation that the internet spread with its own online article. However, even their article was filled with fear-mongering nonsense. They confirmed that bacon is bad, but not as bad as cigarettes, even though that's what they initially compared them too, but bacon, in all seriousness, isn't super duper bad, you can still enjoy it, but you still shouldn't eat too much of it, "too much" is about 2 grams, but you're not a cocaine dealer, so you have no idea of what a "gram" is, just go back to eating your bacon, but not too much, or you could possibly get cancer…maybe.

Dammit! Got me again.

Why don't we learn? How many times has the internet tricked us into believing that food is murdering us, then later revealed the whole thing to be a sham? I wish the internet could just be upfront with us. Why can't it just say, "Hey, Fat American, ease up on the bacon and ho-do's, OK?"

In my weaker moments, I think that getting scared by horrifying articles is a good thing for me, especially with something as magical as bacon. When a food tastes that good, it's easy to get carried away and eat it by the fistfuls in a rage until you blackout from a sodium overdose. Still, the internet's calculated and mechanical ability to trick us into reading its propaganda cannot be ignored. Its obsession with ending any sense of unobstructed joy we could potentially feel is beyond sociopathic and must be neutralized. The most effective method for stopping this behavior is to simply ignore it, to not read any of these articles.

But, who are we kidding? We all know that's impossible. The titles are so titillating!

We're all at the mercy of the internet. It's only a matter of time before the it ruins something you love. My advice is to treasure your vices. Treasure your self-serving behaviors. Treasure your sick interests. For soon, the internet is going to spoil it for you with an article title so obviously overblown, you'll be blind to its trickery and click.

So tonight, I plan on drinking an entire handle of warm, bottom-shelf gin in memory of my once unrestrained love of bacon and hot dogs. I'd better finish it quick though, the allure of "7 Secretly Transgender Hollywood Stars Document How Gin is Bad for You" may prove too great.

Related
How to Use the Internet, For Boomers
JP LeRoux
Dante’s eFerno: The 9 Levels of Internet Hell for Social Media Sinners
Tim Sullivan
I Forced Jeff Sessions to Eat from a Trough, and Now He Thinks White People are Superior to Dogs
Matt Rotman
Resources