A Basic History of the Great State of West Virginia

Several years ago, I made the mistake of moving to West Virginia. Now, when I attempt to meet women outside of the state, the stigma of living here leads to undeserving bias. I feel the need to dispel the misconceptions about the theme of what was once my favorite John Denver song and currently the state that I call home. Please enjoy a basic history of the great state of West Virginia. 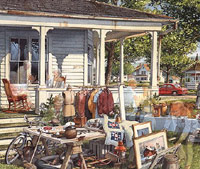 In 1863, West Virginia officially seceded from Virginia, becoming the 35th state in the union. Two weeks after the division, President Abraham Lincoln and a full legislative branch (with an obviously morbid sense of humor) passed a law called the Junk Initiative, forcing every family in America with a passion for yard sales to immediately populate the newly-formed state.

The first order of business was to determine a location for a capitol. On the record, the original capitol city of Wheeling was chosen because of its spectacular beauty and proximity to the confluence of Wheeling Creek and the Ohio River. Off the record, it was the only city in the state with a bait/liquor store. The founding fathers could finally enjoy their hobbies in a convenient setting. Years later, the city of Charleston was chosen to replace Wheeling thanks in part to the highly touted opening of the country's first Waffle House.

“Most importantest, we need to put us a Walmart and titty bar on every highway exit throughout the state! Now, where the hell did I put my beer?”Step two was the development of a slogan. Many choices were turned down in the early years, like “We've Got Mines,” “The Four Stop Light State,” and “Go WVU!!!” Finally, the government settled for “Almost Heaven.” Although the origin of the slogan is unclear, some assume that it was chosen because many would rather be dead than spend time in West Virginia; others believe that it was poached from the lyrics of a Bryan Adams song.

Once the important decisions of a capitol and slogan were handled, the government began enforcing the Junk Initiative by sending out crudely written invitations to every hillbilly they could find. Over the next several years, toothless fuck nuts from around the country began to show up in dented pick-up trucks fully loaded with low quality items that apparently look better on a card table in a front yard than inside their homes. Since the formation of the state, it is a known fact that no yard sale puzzle has contained all of its pieces.

1869-1969: Forgotten History and the Hippie Revolution 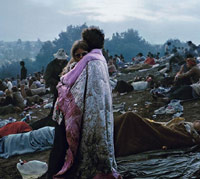 Reports of the next 100 years are a tad sketchy, since no one in the state was literate enough to create a newspaper, but historians speculate that birth defects, gluttony, and fart humor ran rampant. The hippie revolution of the late 1960's sparked a new resurgence of the state thanks to the rolling hills, lovely camping grounds, and ridiculously lackadaisical drug laws.

In the summer of 1969, a (slightly) better class of people began moving to the state, pushing generations of bumpkins into a frantic new mindset, and the new residents were in for a treat. The “high faloutents,” as they were called, began to encroach. For the first time in West Virginia history, people who were capable of reading and writing, holding a job, and eating a portion-controlled meal were taking over the countryside and building houses without wheels.

New businesses popped up left and right, and demands for land improvements flooded local governments as people wanted to get more out of their tax dollar. For many years, the highest art form in the state was the weekend when the circus came to town and nobody complained. It was becoming obvious that a new breed of resident was overtaking a once simple society.

People born and raised in West Virginia felt that the population influx couldn't happen without their input. On June 12, 1970, rednecks from all around convened in what was advertised as a town hall forum to discuss the ever-changing landscape. The only record in existence of the event is a short, grainy video revealing an assembly that looks less like a town hall meeting and more like an extremely disgusting wet t-shirt contest.

Not necessarily known for his oration skills, Governor Arch A. Moore provided the keynote address from atop the hood of a windowless Plymouth Duster. In his speech, Governor Moore stated, “Thems people are going to run us off our land! We have to raise taxes, firm up our ‘in-free-structure,' and rebuild the schools that we tore down for firewood. Most importantest, we need to band together and put us a Walmart and titty bar on every highway exit throughout the state! Now, where the hell did I put my beer?”

Governor Moore's riveting speech changed the way long-standing West Virginians thought about their beloved state. Local governments quickly developed a priority list of needs, placing strip clubs in the number one spot, ahead of highway construction, education, natural preservation, health care, and farm subsidies. In all fairness, how is it possible to create farm subsidy law when you can't spell the word “subsidy”? Of course, the attention quickly waned once the fall television season began and West Virginia would take a tremendous hit in attempting to redefine itself.

1970 to Present: The Downward Spiral 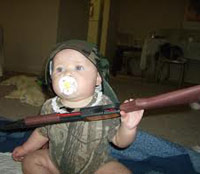 Gilligan's Island and The Brady Bunch came and went and new television shows occupied the yokels' time. Roads and bridges were falling apart, as was the educational system. Children were being born into poverty-laden, cigarette smoke-filled homes without any futures. The vicious moron cycle continued to roll.

In January of 1985, following a 2-year, 8-month stint in several federal prisons for embezzlement (that is not a joke), Governor Arch A. Moore reclaimed his seat as the 30th governor of the state and decided it was time to finish what he started. At his inauguration speech on the steps of the capitol building, Governor Moore took a large swig of clear liquid from a mason jar and emphatically stated, “I have a hangover. Can we please get that marching band the hell out of here?”

Believe it or not, since that momentous day, the state has only gone downhill. Minority programs continue to falter, yet libraries contain more skin magazines than ever. In regard to the economy, pork rind and lottery ticket sales rank second and third, respectively, behind Pabst Blue Ribbon. Cable television is available to 1 in 2 people, but indoor plumbing only to 1 in 10. The state of West Virginia continues to prove itself as the armpit of the country.

Here is the extensive list of famous people who hail from the great state of West Virginia:

Yup. That's it. An Olympic darling and Mr. Furley.

On second look, when I try to pick up a woman, maybe I should refrain from telling her the truth about where I live. It might go over better saying, “I'm homeless.”

Related
This Date Isn’t Going So Great, So I’ll Pretend I’m In the NHL Playoffs
Rowdy Geirsson
How Writers Throughout History Have Beaten Their Writer’s Block
Declan Cross
Junk Drawers of History
Walt Maguire
Trump’s Border Wall is Definitely a Metaphor, and I’m Definitely Not Riding Your Husband Like He’s a Clydesdale Taking Me West
Cara Michelle Smith
Resources