I‘m a halfie. (Nobody cares about your libido, buddy.) What's a halfie you say? Well, my mother is Cuban and my father is American. I'm not brown, I'm not white… I'm fucking khaki. And it sucks. Here's why.

First and fore-fucking-most, nobody believes me.

“Dude, you're white.” Yes, I know I'm white in appearance, but my mom's Cuban.

“Yeah? Say something in Spanish.” What? I'm not a fucking cocker spaniel you asshole.

“I knew it, you're not Spanish.” Dude, yes, I am half Cuban. But I don't feel the need to prove it to you like I'm some kind of dog.

“Say something in Spanish and I'll give you a piece of cheese.” …Cheese? Come pinga, mamahuevo.

“Well fuck you, no cheese!”

The only thing I salsa is chips, and phonetically, meringue has “gay” in it, so I see little appeal in doing that. It's true, I look white, sound white, and act white, so I can understand people being misled. I mean I get it, have you ever seen Desi Arnez wearing Mossy Oak camouflage hunting bibs? No. So yeah, it's understandable where they're coming from.

However, there is some fun in this; for instance, I can hang out with a group of rednecks and blend in just fine. “You know what's ruinin' this country? Hispanics, I tell ya.” Yeah! Hispanics and Affliction! “Hell yeah… what's Affliction?” But it doesn't stop there. I get fucked with by fellow Latinos as well. “You're white, bro.” Yes, I know I'm white in appearance, but my mom's Cuban. “Yeah? Speak in Spanish then.” What… I'm not a fucking cocker…. Nevermind. Yeah, I'm fucking white. “Told your ass, puto.”

Here's another thing that sucks: I have no fucking idea what my kids will look like. I could end up with one that looks like Hitler's Youth, or I could have one who looks like he should be waiting outside of a Home Depot. Honey, have you seen Carlos? “Yeah he's harassing men in pick-up trucks at the Chevron.”

But the truth of it is, one side of my family is going to be disappointed. If I bring a red-haired, green-eyed kid to South Florida…HA! Are you fucking kidding me? “OK, joo know wha we gonna has? We gonna has the lechon, arroz y frijoles, y we gonna has platanitos, y un guayaba con cheese….. y un Peanu-butta y Helly for el gringo.” Seriously, if I bring Sebastian WhiteyMcWhitester down there, they'll handle him like they're playing hot potato, but instead of a potato they're passing around an exploding AIDS grenade.

On the flip side, if I go up to Iowa with Ernesto Don Chicharrones, I'll probably hear, “Can he use a rake yet?” No, goddamnit, he's not raking up the fucking leaves. “Oh…well then whatever will he do for fun?”

What would be great is if I have twins, one brown and one white. Hahaha, oh the looks my wife would get.

The real kicker is this: I can't even fucking take advantage of my “Hispanicness”; it does me no fucking good on an application. If I check “Hispanic” they'll for sure flag that as fraudulent. I can see it now in an interview: “Here at YadaYada, LLC we like to have a diversified workforce, Mr…Stanley….am I saying that right?” Actually it's “Estanleya,” and I'm kind of in a hurry, I double parked my raft. “Look, Mr. Stanley, I do not doubt your heritage…but you're white.” Yes sir, but my mother is half Cuban. “But you were born in America.” So are black people! “….We don't like to go there, sir.” (Yeah asshole, don't go there.)

But come on, if black dude “A” was born in America, as were both parents, and white looking dude “B” was born in America, but one parent was born in, oh I don't know, let's say FUCKING CUBA!!! then white looking dude “B” is more of a minority. “No, I understand that. But you look white.” Okay, so if I dyed my fucking skin red, then what? “Well, then you'd be Native American.” Holy shit, all you see is color. “We also see statistics.” Oh, well that's fucking solid.

I have pretty much figured out that the only part of me that resembles anything Latin is the portion of my body from my neck to my waist. Aside from the Frankenstein, I can't dance for shit. The only thing I salsa is chips, and phonetically, meringue has “gay” in it, so I see little appeal in doing that. (Homophobic, are we?) Talking like Yoda, you are….

Anyway, I can't hold a tan to save my life; it's either lobster or Casper. I think it's safe to say I lack the “suave” personality. My only pick-up line when I was single was, “Damn, you're so hot you're making me sweat…but I did have Italian food tonight… so… that makes me sweat too. Can I borrow an ice cube to rub on my forehead? I'm Marty… um… damn my glasses keep sliding down my nose… is it just me or is it kinda greasy in here? Hey, where are you going? Is that your boyfriend? Oh, well you look like you know him…no? Y'all just met….wow, would never have guessed that. Okay, seeya.” 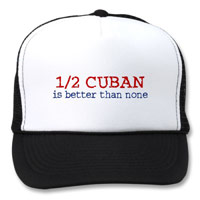 But, I'll tell you where I am Latin: my stomach. If it has the potential to kill you then it tastes great to us. “Hey, you know what we should do with this roasted pork? Flash fry it!” “What should we do with this flank steak?” Uh, how about we fry it, serve it with a fried banana (because healthy fruit is gay), but first we'll serve a ball of fried mashed potatoes stuffed with ground beef with a side of ground up fried ham sticks! “We'll need something to drink.” How about a thick, sugar-packed milk shake? “Maravilloso!”

Ask yourself, how many thin Latinos you see walking around? Exactly. Well, there is an exception and they're called Puerto Ricans… and we don't like their kind.