Bored silly on a Saturday night? Me, I caught Grossman's lecture at a local middle school after having read a circular which was stuck in my windshield wiper at the mall (where I'd been to see Love and Marriage at one of those multiplexes which play second-run specials…a ticket and small popcorn for only $9.50). I figured I needed a highbrow change of pace since my brain had appeared somewhat flabby on my most recent CAT scan.

The fee and hard seat notwithstanding, I was determined to enjoy the evening, and before introductions were even completed I'd already forgotten that Love and Death was playing across town for $7.50—which included the privilege of choosing sides in the cola wars. Thanks to Grossman's reacting to his own introduction with applause (not to mention his exaggerated facial tics and the uncanny ability to make clearing his throat sound curiously like the swirl of water in a toilet bowl), I soon no longer regretted the fact that my wiper blade had failed to dislodge the advertisement in question, even after twenty consecutive sweeps. And so, with a growing sense of anticipation, I awaited the opportunity to exercise my long dormant brain with the help of a man who had earned honorary degrees in physics and parapsychology from Upper Volta University, and had also managed to obtain a GED from the Mickey Rooney Institute of Burbank.

What follows is a brief summation of what Grossman sees through his red, roadmap eyes as he stares out across the experience of eighteen months since the publication of "Grossman's Guide to the Galaxy" (a book that not only rocked the scientific community because it described the Andromeda Galaxy, but which enabled Grossman to achieve his more practical dream of being interviewed by Jon Stewart). 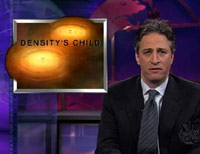 "It is insecurity," Grossman contends while on his whirlwind lecture tour, "which has been inculcated into the American psyche to the exclusion of everything. This includes objectivity, perception, all the major emotions, sanity, and so-called ‘common' sense."

History itself will determine whether Grossman is right.

"Looking down on your body is very difficult to achieve, as you may have suspected, especially if your name is Madonna. While many people hate their bodies, they have yet to master this skill. Simply loathing what you look like will not work in most instances. You have to be able to do it with your eyes closed. Once you learn to do this, however, all that remains is really despising ‘where you are.'"

"There is an Intelligence at work in the universe and it's not us. Of all the planets my consciousness has visited I have yet to witness a similar form of life. Is this an accident, I ask, or rather by design? And what happens when this Intelligence decides which Designer Beings are in style and which out?

"Of course I've never seen this Intelligence up close, but then I suspect that the galaxies are merely cells in Its body. In which case black holes can be thought of as cancer cells associated with not getting enough fiber in the diet. And my mental projections to try and communicate with It (if It exists) have been blocked by what may be It's blood/brain barrier. Optically, of course, the telescope on Mt. Palomar can only see as far as the walls of Its intestines. Viewing is difficult due to the presence of gas."

"Humans are unique because they have developed extremely short attention spans. Only a hummingbird's is shorter. This is a direct result of the advent of the 30-second TV commercial. Searching the fossil records, we discover that prehistoric man may have taken as long as three months on a single cave drawing. Today we pride ourselves on how many subway cars we can vandalize in three minutes. Indeed, without the aid of music videos and special effects we become bored in exactly 64 seconds. Last year it was 83 seconds. When the countdown reaches zero someone will launch their missiles the moment their iPod battery dies."

"The major problem with love is that because of high divorce rates, homo sapiens came to realize that they can probably fall in love with just about anything and anybody. So now it has become harder to fall in love, even over a candlelight dinner. Unless, of course, it's too dark to see what's going on."

"It's all a game on the Hill, and the drinks are on the House. Unfortunately for us, it still remains a shell game played by blind people betting with our money."

"The reason insecurity is so endemic to our present state of evolution is because we've finally realized we're not so big after all. It all started about the time Galileo took out a comprehensive insurance policy on his new telescope. It will end on the day we wake up to the realization that there are more lawyers on the planet than non-lawyers."

At home later the same evening I practiced flexing my new mental muscles, and with incredible strain managed to float my consciousness out the window and high over my house. But after a minute or so of this I became inexplicably bored, which I suspected was not only because it was too dark to see into my neighbor's bedroom. "Was this really the final frontier?" I asked myself bleakly.

Quickly dodging several quite common birds, I returned to my body, changed clothes, and cruised over to see A Midsummer Night's Sex Comedy for the eleventh time, making a mental note to sue Grossman for "at least a refund." But when I came out of the movie there was a second leaflet stuck in my wiper blade.

Grossman, it said, was moving to the Queens Civic Center for a limited engagement. I decided to drop the lawsuit idea and buy another ticket when I saw the subject: "Intermediate Projection—Getting Higher Than a Kite." There was even an order form attached, detailing Grossman's second offering: "The Missing Link." The blurb went, "For an examination of cave art, travel back in time with the professor 2 million or 20 million years."

Apparently, like so many interviewed by Jon Stewart, Grossman wasn't too sure about the decimal point.

Related
The Ghost Host Would Like to Voice Some Concerns on This Haunted Mansion Tour
Neal Duggan
Ethan Frome’s Depressing-as-Fuck Hometown of Starkfield, MA: Historic Snowshoeing Tour
Kerry Reynolds
The Differences Between Going Abroad as a Tourist, a Backpacker, or a Traveler
Jon Fish
Resources