"I have a Gucci store worth more than Romney," PLAYAAAAA.

After a series of ridiculous sound bites, Donald Trump gave me no choice but to compile his quotes into a rap (along with a few additions for transitions). It wasn't all that difficult to put together really; the nature of his language naturally lent itself to the arrogant tone of hip-hop.

Donald Trump is in quotes, help from his unofficial team is in between. (None of the below viewpoints reflect those of the author.) 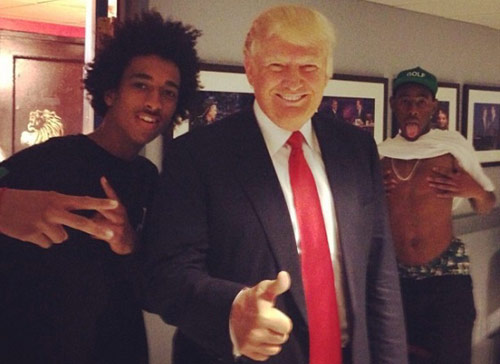 "I have a Gucci store worth more than Romney."

I chew on rhymes and spit 'em out like Kanye.

I like breaking glass ceilings so I built a solarium.

"Sorry losers and haters, but my IQ is the highest."

And I don't need a rug ‘cause my hair is the flyest.

"Some people call me lucky, but I know better."

I'll squeeze a businessman until he's a debtor.

The only time I went gay was when I screwed Gaddafi.

"The women on The Apprentice flirted… That's to be expected."

From the White House lawn, I'll keep Mexicans where they should be,

"I will build a great wall—nobody builds walls better than me."

Take a look around, "I am the least racist person there is."

Don't donate to my campaign. I'm sure you won't disagree.

"The money you're talking about is a lot, but it's peanuts for me."

Buy Alena Dillon's book of humor essays, "I Thought We All Agreed to Pee in the Ocean" on Amazon!

Related
A Quick Reminder that Donald Trump’s Twitter is Amazingly Cringeworthy
Hayden Church
Transcript of Donald Trump’s Interview with Sean Hannity
Donald J. Trump
Dear Mr. Trump, We Regret to Inform You That We are Unable to Publish Any of Your Manuscript Submissions
Tara Rosenblum
Resources