Some kids know exactly what careers and genders they want to switch from in life.

To my sixth grade teacher, Sister Mary Elephant, and classmates:

When I grow up I want to be an Olympic Decathlete and win the Gold Medal for my beloved country, the United States. Afterward, I want to jog around the Olympic Stadium with the American flag wrapped around my shoulders. This will make me and everybody feel patriotic about their country. America will have given birth to an incomparable American hero: me.

Then I want to capitalize on all that other stuff that comes with stardom, such as a photo of me on the cover of a Wheaties cereal box; endorsements in TV commercials; women, who I don't even know, chasing me, writing me letters saying they want to marry me; and what not. Then I want to get very selfish, divorce my wife, fall prey to my basic human proclivities and weaknesses, and start dating other women. 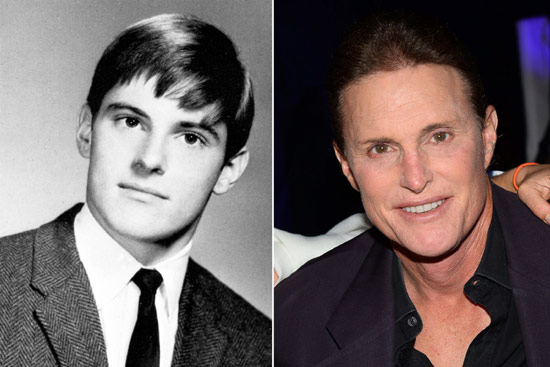 Unshackled from the strains of conventional relationships, I want to fall in love with the mother of the Kardashian Klan and be on their hit reality TV show. The show will be about the daughters selling their souls to Satan, doing and saying anything on screen that shocks people so they can't turn their eyes away. This will be the rebirth of my fame.

It will give me comfort to learn that my desire to be a women and not a man is not as unusual as some people might think.Having been out of the spotlight since my Gold Medal ceremony, I will be back into the consciousness of all Americans for being a surrogate, sketchy-acting dad with a bit part in a major TV show phenomenon. Critics will call me the "Comeback Kid."

During the show I will say odd things and not do much really, just kind of be there to watch this travesty of American family life unravel. I will get fan letters from viewers asking me how my life went from superstar American athlete to reality show sideshow candy corn Dad who lacks a spine and appears to have lost his way.

As the show reaches its viewership zenith, I'll get a face job so it looks like I put my mug onto a frying pan and then squeezed it dry like a sponge. In subsequent episodes I will start unraveling my long pony tail, which will really make people wonder what I'm up to because, generally, middle-aged men don't just all of the sudden grow long pony tails while being sideshow dads on reality TV shows about their daughters living tawdry and dishonorable lives.

Then I will launch start to turn over a new leaf. Slowly and methodically, I will reveal that I want to be a woman, not a man. People Magazine will publish an article about me saying I have been dressing like a woman for several years in small private gatherings, wearing dresses and earrings and blush and other women's makeup. The magazine will report how I told my whole family about this and that they support my decision and that there are 700,000 people in America who are transgenders, meaning they change from being a man or a woman or vice versa. This will make me not feel so unusual and self-conscious. It will give me comfort to learn that my desire to be a woman and not a man is not as unusual as some people might think. Feelings of normalcy will envelope my psyche.

With word spreading about my physical transmogrification, I would start to feel stronger and more comfortable with my mind- and body-altering decision. Each day I would put on a dress and make up and walk around my neighborhood feeling emboldened and more at peace with myself than when I was an Olympic Gold Medalist adored by hundreds of millions of Americans including every gorgeous woman in the country. Those will not have been my best days, I will remind myself. Going forward as a female will be my nirvana, the final destination of solace and solemnity.

A woman is who I am. It's a basic instinct. It's all I've ever wanted. Not the Gold Medal. That was a digression. Womanhood is my favorite neighborhood.

To build on my accomplishment, I will apply for a job as president of the National Organization for Women. But they will reject me because they disapprove of the Kardashians for being disrespectful to the female gender.

Shaken but undeterred, I will travel the world giving speeches about my life journey. Tony Robbins, an inspirational speaker and swindler, will have me talk to his group about the power of now and how to pursue dreams with gusto and devoid of inhibitions, to find your inner core and get it to shout from the highest mountain.

As part of my show, I will demonstrate how to break a cinderblock with my bare hands. This is one of Tony's provocative ways of revealing how the mind can accomplish anything it wants. My decathlon athleticism, albeit long since withered away by time and lack of physical training, will come in handy for this.

Oprah will have me on her show and I will tell her my story of how I came to be who I am and how everybody should do what they want to do, follow their heart, and not listen to what society says people should or should not do, or be, or say and think, or wonder about, or long for, or be bemused by.

After a few years, this will get kind of boring. So I will turn to religion. Applying for a job as a parish priest, the clergy will say they don't allow people into the priesthood who were born a man and then made into a woman. I will tell them I was the father on the Kardashians and they will say that, while they watch the show avidly, they still must abide by church doctrine.

I will then write a book titled, "Why the World is Confused About Me." It will be a New York Times best-seller. Everybody will want to understand my story, which will be unique in American history. No American will have lived my journey.

The world is a confusing place, and so my book title will really hit an emotional nerve with people. To understand their own confusions, they will find solace in reading about mine.

The chapter titles will be "I Don't Understand Myself Nor Does Anyone Else," "Nothing Makes Any Sense to Me," "Nobody Understands Me," "Think Outside of Yourself," "The Decathlon is Overrated," "Don't Eat Wheaties – Fruity Pebbles are Much Sweeter," "What is Up With Me?" "You Lost the Game of Life to me, Renee Richards," "Boy Oh Boy Oh Boy Oh Boy George," "What it's Like to be the Weirdest Person on Earth," and so on.

During the book tour I will pose for countless photos in my lingerie, ballroom dresses, halter tops, and high heels. On every major magazine in the country I will be featured plugging my confusing book. In every grade school in America, sixth graders will be required to read my book and write an essay about it. A girl will write about how when she wants to grow up and become a man who wins the Olympics Decathlon Gold Medal. When this happens, I will know my life had meaning.

This is what I want to be when I grow up.

Related
I Am the Woman Who Bakes Brownies for Her Coworkers on a Weeknight, and My Life is Definitely Not Crumbling Before My Eyes
Kim Windyka
I Am the Improbable Fireball in Every Hollywood Action Movie, and I Demand a Lifetime Achievement Award
S.A. Swanson
Christmas Gifts for the “Creative” in Your Life
Graham Techler
Resources