The Biggest Fight of His Career: Muhammad Ali vs. Poetry

How did Ali turn into one of the greatest contemporary poets ever?

For years Muhammad Ali was challenged by the elusive simile. He was plagued by its power, unable to express his unorthodox fighting style with poignant, poetic beauty. Ali's journey to "float like a butterfly sting like a bee" paints the familiar picture of a struggling artist: guzzling absinthe in an off-the-road bar on the weekdays and punching groups of giant topless men in shorts on the weekends.

"The Greatest's" battles with the English language were the stuff of legends, causing intense stress headaches, massive bouts of depression, and highly disturbing spoken word demonstrations at the local Def Jam coffee house. There was a time when nothing could console the aspiring poet. As Ali reminisces today, "I wanted to be the Heavy Weight Champion of the World in both enjambment and poetic meter. I even changed my name and religion in a desperate plea for inspiration. Unfortunately, my words often floundered, like when your dial-up modem is lagging and behaving fishy. Damn, that's a hell of a simile… I've still got it."

Fitzmonistein has concluded that a well-executed swirlie would have done wonders in helping Ali expose the hidden poet within. Trainer Angelo Dundee witnessed Ali's artistic transformation firsthand and recalled how his poetic obsession bordered on the insane. "Ali would repeat line after line of Chaucer and Poe, educating the speed bag in both physical pain and mental confusion. In the gym he would often erupt with impromptu interpretive sparrings of Shakespeare's King Lear, bursting into tears mid-bout. Let's just say the other boxers didn't appreciate his complex prose or dramatic flair. If he wasn't such a big guy, that nerd surely would have received a torrent of vicious swirlies from the boxers around him."

Angelo's words ring true among boxing historians today, and upon further investigation, may contain a buried revelation: groundbreaking research suggests a swirlie may have been the exact medicinal cure for the tongue-tied boxing auteur.

Part-time poet and highly renowned University of Phoenix psychology professor Jordan Fitzmonistein has concluded that a well-executed swirlie would have done wonders in helping Ali expose the hidden poet within. Fitzmonistein himself achieved a poetical epiphany during The Thrilla in Manilla Swirlie of 1982. Performed on a blistering summer day in PS 115's eighth grade gym class, Jordan received a swirlie he claims was, "the most important flush of my life. I swear. Even more so than that time those laxatives finally kicked in after that poorly miscalculated all-fiber and bran diet. Talk about your quintessential college experience. Ten days, no poop. Surprisingly you get very bloated, not very muscular." Fitzmonistein claims the eighth-grade incident allowed him to bud as a poet, psychologically realigning his world-view to reveal life's true essence, while having minimal influence on the content of his work. (Check out his collections Life is a Hurricane: Don't Get Caught in the Eye of the Porcelain or I Don't Like Soft Serve Ice Cream: The Machines Disturb Me, to sample poetry by the prolific author.) 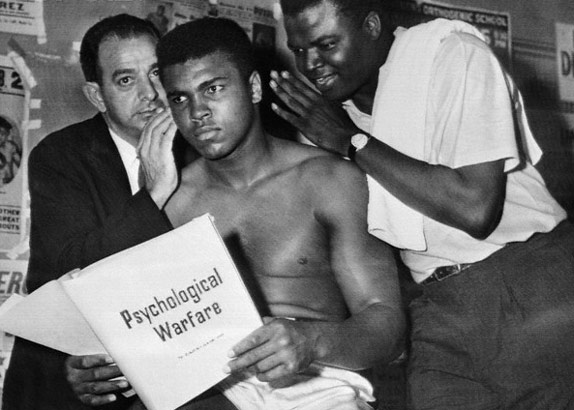 While the professor's point carries great weight in the abstract world of academia, any hot-blooded, real American male knows psychological analysis must be ignored. Psychology is a pseudo-science created as a way to seduce the fairer, box-oriented*, female race at the bar of your choosing. Based on complex social theory, the "science" of psychology demonstrates sensitivity for both the transient spirit of the woman and her organic biological construction.

Unfortunately for psychology's founders, their work was for naught. "Hey babe, great tits" continues to be a much more effective blow-jay extractor than, "Hi subject, looks like you have quick synapses and a pleasurable id," once again proving that intelligence is a highly overrated asset for the modern-day man. Sorry Mr. Freud, we understand your sexual frustration; some men are simply born lucky and dumb.

If not by swirlie then how did Mr. Ali transform into one of the great contemporary poets of modern times? Some say it was a consequence of strong work ethic and dedication to jump rope that enabled him to learn the rhythm of a true poet. Others say it was a visit to the butterfly petting zoo at Luscious Valley Bee Farm, his subsequent obsession with beekeeping, and profound interest in hovercrafts that finally put his artistic world in order. And still others say it was all that LSD. I like to think it was a little bit of everything, sprinkled with a hint of alien abduction. Either way sir, we present you with this Heavyweight Champion fountain pen—go make some literary magic.

*Yes, that just happened in a boxing article.