Men are haunted by the vastness of eternity. And so we ask ourselves: will our actions echo across the centuries? Will strangers hear our names long after we are gone, and wonder who we were, how bravely we fought, how fiercely we loved?

I need to do something noteworthy so that history records my name and I am never forgotten. I don't need to be a household name for the next two thousand years or anything. (To be honest, I couldn't hold a candle to the Prefect of Judaea. Not only did Pontius Pilate kill Jesus [manus lavo], but he also focused his beliefs [that mental and physical health were inter-related] into a physical fitness system that uses the mind to control the muscles in your body: Pilates.) In fact, I'd like to be remembered without having to actually "do" anything. Like how Bella will be forever immortalized by her decision between Edward and Jacob. Or how Snooki will be remembered for being on the worst fucking show I have ever seen.

Maybe my place will be writing the biographies of great men. But no one remembers the name of the guy who chronicled the struggles of Achilles or Odysseus.What makes a man great? Some men are born great, some achieve greatness, and some have greatness thrust upon them. Chuck Norris is the only example embodying all three. The only son of Charles Atlas and Rosie the Riveter, Chuck used his demi-god powers to perform twelve labors given to him by The King of Rock and Roll: Elvis.

The Twelve Labors of Chuck Norris:

Never was so much owed by so many to so few. I don't believe I will receive a windfall of greatness. Maybe my place will be writing the biographies of great men. But history soon forgets their names. No one remembers the name of the guy who chronicled the struggles of Achilles or Odysseus. And even if they do remember his name, he would be nothing without Marge behind him. 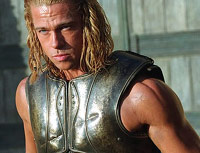 One look and I was lost in the deep blue sea stare.I was watching the movie Troy with Brad Pitt, and he turned to me and said, "If you stay in Canada, you will find peace. You will find a wonderful woman, and you will have sons and daughters, who will also have children. And they'll all love you and remember your name. But when your children are dead, and their children after them, your name will be lost. If you star on season 2 of Jersey Shore, glory will be yours. They will write stories about your douchebaggery for thousands of years and the world will honor your name. But if you go to New Jersey, you will never come back, for your glory walks hand-in-hand with your doom. And I shall never see you again."

A single tear rolled down Brad's perfect facial bone structure, and our eyes locked. I almost drowned in the infinite sadness and lust contained in the depths of his cobalt blue irises. We shared a silent agreement that our feelings for each other were forbidden. Besides, even if we acted on such primal urges, Angelina would soon be home, and the children were in the next room.

The silence in the room crackled with the energy between us. Inexplicably, we finally lost control of our inhibitions at the exact same time, as if some external force wanted us to be together. As we embraced, I felt the weight of years of patience and wanting lifted from my shoulders.

"We don't have much time," I gasped, as Brad ran his fingers down my spine. Every hair on my body rose in anticipation and my heart almost beat out of my untrimmed chest.

Then we did it.

Related
What I Imagine Happens at My Senator’s Office upon Receiving an Email from Me
Leila Sales
Why Should I, Someone Who Enjoys Putting Razor Blades in Halloween Candy, Have My Rights Trampled Upon Just Because of the Actions of a Few Bad Apples?
Christian Alsis
Resources