The 5 Cats You'll Have to Euthanize Before You Find Mr. Right

Ladies, here's the cold hard truth: If you want a man, you're going to have to make some sacrifices. Some are small, like only pooping once a week in the dead of night at the gas station across town. Others are bigger. This is especially true for so-called "cat people," who inexplicably love those furry sons of bitches so much they'll go to great lengths to explain why their asshole cat is so great in spite of being an asshole. 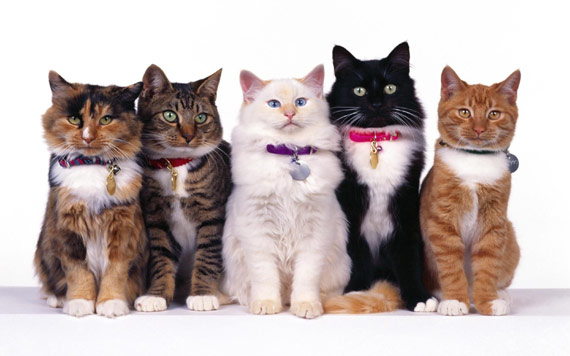 Unfortunately, the fact is there's only room for one lazy prick in each lady's household. So, once you've made the decision that a man can ignore you in ways a cat just can't…

When you first adopted Tigger from the shelter, he was shy, scared and close to death. Even after years of full meals and gentle cuddles, he still backs away fearfully any time you accidentally make a loud noise near him. But he sleeps by your side every night, a reminder that even though he might not be the perfect kitty, you're still the only person in the entire world who makes him feel safe.

The trouble is, by sticking by you night after night, he's taking up valuable real estate. If you ever want a man to be the one that keeps the other half of your bed warm, Tigger's gotta go.

Sorry Tigger. You are gone but not forgotten.

The sweet one. Jeez…this one will be hard.

We suggest holding her tiny little paw as the vet injects her with the phenobarbital and she goes gentle into that good night. As you leave the veterinarian's office in stoic silence, just remind yourself that after you find the One you will never again have to wipe away your own tears as you mourn the loss of a loyal pet…no, she was more than a pet, she was a friend.

Smokey is the last living relic of your childhood. You've had him since you were ten, and when your parents died in that terrible accident he was all that they left you. He's about as old as a cat can get, but he's a fighter. You have more pill bottles for him than a nursing home storeroom, and you're up to your neck in vet bills, but you just can't bear to part with the little guy.

Which is exactly why you have to.

A guy takes one look at the amount of effort you put into keeping that furry sack of bones alive and you can say goodbye to the nice two-story house in the suburbs you always dreamed of filling with kids. Look on the bright side, he's not going to be alive much longer either way.

He's the noisy one of the bunch. He lets you know when he's unhappy, and boy is he sassy! Even on your toughest day at work, you find comfort in the fact that when you get home, there's Shadow, always ready to make you laugh with his silly little shenanigans.

It'll be pretty hard to put Shadow down, especially when you have to watch the light fade from the eyes of a creature that has always been so full of life and energy. But it's the most humane thing to do, considering that the alternative is scaring away a man who realizes he can't stand that damn cat that keeps meowing at him because he's sitting in "his chair."

Pumpkin never did anything to no one. In fact, sometimes you even forget about her because she's so quiet and polite. She could ostensibly stay without bothering anyone.

But you're committed to being committed, and you're four down, one to go. So go ahead. Make the final leap.

Maybe if you let her wander around outside for long enough, the neighbor will accidentally run her down one of these days with her minivan, and then not only will you be cat-free, but Mrs. Jennings will owe you a big fat favor to boot. Perhaps you could ask her to introduce you to her son…

Related
10 Dos and Don’ts for Finding a Handgun in the Living Room After a College Party
Jimmy Wyatt
Five Questions I Have for the Dude Grinning at the Gym
J.R. Night
Announcing Our Official Decision Regarding Whether or Not to Have Children
Dave Powers
The 3 Social Media Posts You’ll See on Your Feed Right After the Holidays
Cara Rothenberg
Resources