As I pulled up en.wikipedia.org/wiki/10_Cloverfield_Lane#Plot on my neighbor's unprotected internet, I prepared myself for what reviews of the film had described as a taut, confined psychological thrill ride that I had no intention of spending $10 on a ticket to see. 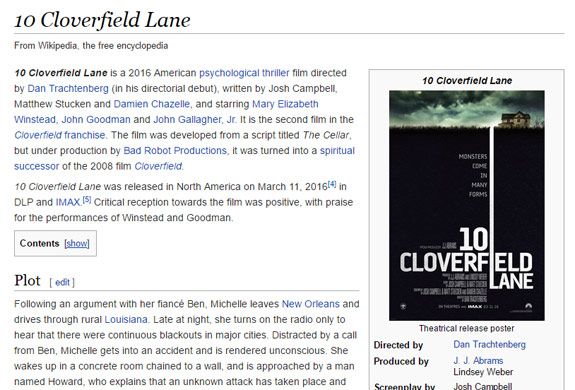 The story opens with a woman named Michelle leaving New Orleans after a fight with her fiancé. Scrolling down a little further, we learn that this is the character portrayed by Mary Elizabeth Winstead in the film version of 10 Cloverfield Lane, which the Wikipedia article was adapted from. Following her departure from New Orleans, Michelle's car crashes and she soon finds herself in the basement of a man named Howard (John Goodman), who explains to her that the outside world is uninhabitable.

In an age where run-on sentences are commonplace, 10 Cloverfield Lane exercises brevity and clarity with grace.Without spoiling the plot, let me tell you that this Wikipedia page is quite the rollercoaster ride. The prose is neither too wordy nor too brief in its summary of the film and it will keep you guessing until the very end of the 4th paragraph. The descriptions of Howard's actions in the story make it clear why actor John Goodman received such high praise for his role in the film 10 Cloverfield Lane and I imagined his character being quite captivating.

Clocking in at 512 words, 10 Cloverfield Lane‘s word count is appropriate for its genre, however its denouement paragraph does linger a bit too long. What could have easily been contained to a couple clauses at the end of the 3rd paragraph was expanded into its own paragraph, causing the story to drag on after the plot's climactic sentence.

In spite of these minor shortcomings, 10 Cloverfield Lane‘s Wikipedia Plot Summary succeeds in telling its story in a confined space with just enough twists and turns to engage the reader without confusing. In an age where run-on sentences are commonplace, 10 Cloverfield Lane exercises brevity and clarity with grace.

As with most Wikipedia articles, 10 Cloverfield Lane is certainly a team effort. This effort has been led in large part by user TropicAces, best known for his work on the Wikipedia pages "Indianapolis Colts," "Tourism in Thailand," and "Famous 19th Century Serial Killers." TropicAces expertly builds upon the work of other users such as Easy4Me, PussyMagnetMan33, and IP address 204.63.214.21, while demonstrating his or her ability as a writer to add a unique style to the project.

If you find yourself home on a Friday night or out on the town with your significant other, 10 Cloverfield Lane‘s Wikipedia Plot Summary is a well-crafted thriller that will leave you guessing until the very end. A must-read plot with a couple great scenes that may even be worth watching on YouTube.