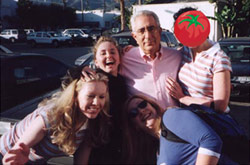 In January of 2002, when I was 19, my friend Sprinkles and I flew down to LA to see our friend Ashley appear as a contestant on Win Ben Stein’s Money. (Sprinkles is not her real name, but she is wanted on bestiality charges in six counties, therefore I cannot put her name and face in this article.) The three of us were homely by regular standards, but by LA standards we may as well have been the three Billy goats gruff (me being the large majestic father).

Being both wildebeests and underage, we were short on fashionable Hollywood locations to go. But, somehow, some way, one magical night the three of us ended up frolicking at Trey Parker’s mountaintop estate. For those of you out of the comedy loop, Trey Parker is the co-creator of South Park, along with Matt Stone.

The minutes went as follows:

Sprinkles and I dug through our collection of exquisite Old Navy and Target garments. We decided matching turtleneck sweaters were undeniably the way to go to fit in with glamorous Hollywood starlets.

“Trey bellowed, ‘Everybody’s gay!!!' and then told us a story about John Travolta's attempt to seduce the president of MTV.”

Realized we were too young, unattractive, and goofy looking to get in anywhere besides Mel’s Diner.

Stood outside The Standard Hotel while it poured down rain watching a fashionable celebrity party with the likes of Tobey Maguire and that Gandalf person (you know who I’m talking about, you stroke your pole to thoughts of him nightly). We made several attempts to sneak in, thinking our turtleneck sweaters would seamlessly blend in with the alluring Hollywood starlets. We didn’t. Our dreams dashed, and our clothes wet, we decided to take the long trek back to the Super 8, watch TV, and shave each others’ backs.

Suddenly, we made THE star sighting! A very shit-faced, nearly-immobile Trey Parker stumbled/crawled outside. Ashley and Sprinkles quickly engaged him in conversation. I stood awkwardly a few feet away where an enormous ebony man in a full camouflage ensemble opened his coat and flashed me a bag of cocaine. I politely declined. 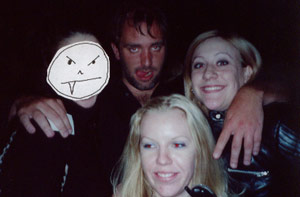 Somehow in the span of five minutes, Ashley and Sprinkles managed to invite themselves over to Trey’s house—a miracle considering we were completely surrounded by models and actresses. It looked as if Danny DeVito had cloned himself twice and all three of him were standing in a group of contestants for America’s Next Top Model.

We got in a cab with TP and his friend, Tom (an editor for South Park) and headed for Bel Air. TP gushed the entire way about his two enormous cats, Jake and Tyrell, and how he was just dying for us to meet them. Approximately nine times he declared, “Jake is fat and black, and I love him!” TP had his arm around Sprinkles, and Ashley had a devilish displeased twinkle in her eye. I could feel a war brewing. 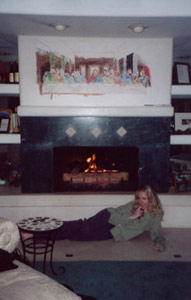 We arrived at TP’s house at the very top of Bel Air. It wasn’t that big, but obviously very expensive. The living room was sparsely decorated, with the focal point being a crayon illustration of “The Last Supper” in South Park caricatures above the fireplace (see photo). TP announced we would be going hot tubbing and promptly disappeared into his room.

TP emerged and threw a massive pile of clothes onto the living room floor and told us to choose our swimming garment. I chose a John Elway jersey and went into the bathroom to “change.” Change meaning, call every single person in my phone to gloat about my whereabouts. This would include my parents who asked,
“Does he know you’re there?” in a very concerned tone.

The three of us, TP, and Tom got in the hot tub in our jerseys and other assorted men’s frocks. Ashley and Sprinkles glared at each other, each contemplating the correct moment to ravage TP. I asked him for gossip about famous people, and Ashley and Sprinkles shot me disapproving looks for not pretending to be unphased by celebrity. TP quickly bellowed, “Everybody’s gay!!!” and then went on to tell us a story about John Travolta pressing his wiener up against a glass shower door at a gym in an attempt to seduce the president of MTV. There was a short lull of silence, then he stood up, turned around to where you could see all of Los Angeles and howled, “Look at all those little people with their little dreams!”

I started to ask TP if he would say, “Screw you guys I’m going home,” and Tom shot me a look that said, I will vagina bomb you if you finish that sentence. Then, like a sneaky predatory hippo lurking beneath the water, Ashley sprung up, grabbed TP's head and began making out with him. Tom, Sprinkles and I looked at each other in complete uncomfortable silence, then I asked Tom what his sign is. Ashley and TP broke their makeout and started giggling.

Ashley excused herself to go inside and “shave her legs,” “legs” meaning “poon and mustache” I would assume. Tom gave TP a knowing look, got out of the hot tub and went in the house. Then Sprinkles began making out with TP, stopping to give me a knowing look, so I went inside too.

Oblivious to the power shift, Ashley skipped back to the hot tub, completely shaved, with gleeful plans of rape, only to see that Sprinkles had nabbed her man! I could see the sadness and rage consume her hairless being.

Sprinkles and TP went into TP's bedroom and did not emerge for the rest of the night. Tom, meanwhile, took turns trying to put the moves on Ashley and I with irresistible lines like, “I met Ray Liotta tonight.” Ashley wasn’t having it, and I was still a chaste Bible-reading saint who didn’t make out with randoms.

Tom realized he was not getting near our clam traps so he left. 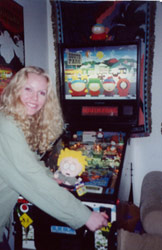 Ashley and I realized we were completely unsupervised to ransack the house. It was too good to be true. We went through everything—all the drawers, cabinets, and every file on the computer—taking photos with South Park stuff and the items in his trophy case. We even prank called Matt Stone on his cell phone.

When there were no more treasures to uncover, I went to sleep with the two 50-pound pussies crushing my chest. I think Ashley stayed up and carried on the search.

In the morning we awkwardly said our farewells and took a cab back to the not-so-Super 8.

There’s no exciting end to this story, but I did learn some valuable lessons: Celebrities are better than us, celebrity weenus is better than friendship, and life is what happens while you’re shaving your poon.