Continuing the excellent work of Michael Winston's "Dear Call of Duty: Black Ops, Thank You," I present you with another tale of video game addiction.

This week I want you to meet Red Shirt Guy, or as he's called on the streets, London Double-Decker.

"What happened to him?" Not since Oedipus has a person needed to reflect this question onto oneself more. Admittedly, London and Oedipus find themselves placed into inherently different situations. One awed a crowd with his intelligence, the other diddled his mother. Incest may be morally wrong, but even nerds get desperate.

"It gets to the point where an hour of sleep is worth less than an hour of WoW. Some nights I slept eight hours, others I slept as little as three."Still, London desperately needs to evaluate where he is in life, but more imperatively what he's become. Even though cashing grandma's pension for a cross-country flight to BlizzCon will score London a sweet load of frequent flier miles, society isn't going to deem him as a person who's going places. I understand he thinks World of Warcraft is 1337sauce. I really do. But if his voice is any indicator, he's a few weeks away from becoming an opening act at Chuck E. Cheese's.

It's not often I feel compelled to talk to other people, but for the Double-Decker I made an exception. Wanting to know more about his relationship with gaming, I tracked him down and got answers the way any self-respecting interviewer would: I threaten to Han Solo him in Carbonite. 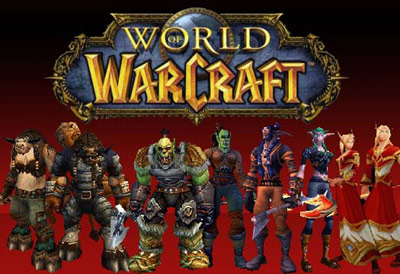 The BREAK Room: When did you start gaming?

London Double-Decker: I started back in the days of 16-bit. My cousin had a Nintendo and later an SNES, so we'd spend hours playing Super Mario Bros., Duckhunt, and Arch Rivals, a basketball game where you could punch the opposing players.

TBR: So how did you transition from punching giants to slaying them?

LDD: A lot of time passed between my Arch Rivals days and WoW. I didn't discover the game until early college. All my friends played WoW. I resisted playing for a year or so, because I saw what it did to them. Unless you've played or known someone who has, it's hard to explain how controlling the game becomes. It's a lot like a succubus.

TBR: What finally got you playing? What broke you?

LDD: Boredom. I had a dishwashing job at the local hospital and I was on the Dean's List, but still I had a lot of spare time.

TBR: I'd like to note the difference in prestige between "dishwasher" and "Dean's List." Next time you update your résumé, you might want to delete one of those. I'd suggest "Dean's List." Completely worthless.

TBR: But employers aren't. You tout something like "dishwashing extraordinaire" and you've got yourself a job. It just exudes "cheap labor."

LDD: (Laughs) Maybe. But yeah, my roommate at the time was a serious WoW player. He always tried to get me to play. "Just try it once, and if you don't like it, you don't have to keep playing." Eventually I gave in.

TBR: You surrendered. You injected. You played.

LDD: It wasn't quite that dramatic, but yeah, I did.

TBR: You mentioned the game takes control over its players. How'd it change you?

LDD: Most noticeably, my sleeping schedule. The more I got into the game, the later I stayed up. It got to the point where on the days I didn't have class, I was staying up until the early morning and sleeping until four in the afternoon. I'd go to work for a few hours, come home, and start the cycle again.

TBR: Just to clarify, when you say early morning, are you talking 2-3AM or what?

LDD: Nah, like 7-8AM. There were a lot of times where my roommate, he and I would watch the sunrise together.

TBR: You realize how gay that sounds.

LDD: It wasn't though. Back then, we were just two guys playing with each other.

TBR: Sounds a lot like what Ennis Del Mar said about Jack Twist, but there's no time to venture to Brokeback Mountain. You were playing roughly 11 hours a day?

LDD: Pretty much. It gets to the point where an hour of sleep is worth less than an hour of WoW. Some nights I slept eight hours, others I slept as little as three. I didn't really eat either. You look down at the clock, realizing the last time you ate was seven hours ago and you're only five feet from a refrigerator. It seems normal when you're playing though. Your brain will rationalize all of it—the sleep deprivation, the malnutrition, everything just so you can pretzel yourself in front of a computer screen.

TBR: It wasn't quite that dramatic. You make it sound like you're Nando Parrado reading from Miracle in the Andes. You weren't exactly debating whether to eat your friend's flesh for personal survival. But anyway, do you think part of the allure of gaming is escapism?

LDD: I think so. When I was younger, my family was splitting up…so yeah, things like gaming helped me get away from all of that. My dad was a drinker, my sister got into drugs, and my mom was left trying to make the best out of the whole situation. A lot of family turmoil back then. Games gave me somewhere else to go.

TBR: You mentioned your dad and alcohol. Researchers suspect alcoholism may have a genetic link. Did you follow in his footsteps?

LDD: Not to the same extent by any means. I have a drink every once in a while, but I've only been truly drunk on my 21st birthday. The night culminated with me spontaneously sprinting and vomiting a spectacular array of tacos and wings. But I've always tried to consciously limit myself with alcohol. I never wanted to become like him.

And with that, I had my story.

You see, London Double-Decker and Oedipus are one in the same. Both fought fate with free will and inevitable lost. One performed a West Virginian doublefecta by killing his father and marrying his mother, the other fled from the addiction of alcohol only to be inebriated with virtual reality. But unlike the bloody mess that became of Oedipus's life, the guy I interviewed still has a chance for redemption.

How do I know? Because, as I said, I had my story.

I may not have interviewed Red Shirt Guy, but I've lived his life. Like any recent Denzel Washington movie, the stories from the interview are all based on real events: my life. But as embarrassing as my life has been, my future is brighter than Red Shirt Guy's. He's already achieved his 15 minutes of fame, and to the colorblind of the world, he's nothing more than a chubby guy in a gray shirt.