"It is not the strongest of the species that survives, nor the most intelligent that survives. It is the one that is the most adaptable to change."
-Charles Darwin

After a break filled with Harry Potter and Thanksgiving, I present to you the Pisas, a family who can't seem to get things to fall their way.

Idiocy should be punishable by death. Just because an individual successfully navigates the birth canal, he or she shouldn't consequentially be entitled to a Social Security check. Of course, this logic defies human nature since we are all innately leeches beginning at conception. Unborn children selfishly siphon their mother's nutrients, offering in return nothing more than an agonizing exit. And although the Bible states we can all become God's children, nowhere does it mention we should all become God's Walmart greeters.

The Pisas perfectly exemplify my belief in death-by-stupidity. For actions so egregious, I want their collective fates to be nothing short of Odyssean.

Here is what I have pictured:

Beneath their feet, the Earth's terrain transforms into Medusa's scalp, from which each fallen power line fuses one of its ends to create her hair. The free ends of each serpentine tangle slither around the individual family members, snuggly embracing each one with an astringent hold. As the cables' constricting clutch tightens around their bodies, the Pisas gasp for oxygen, but their lungs fill with only the asphyxiating air of Death. Demented? Yes. Entirely necessary? Absolutely. 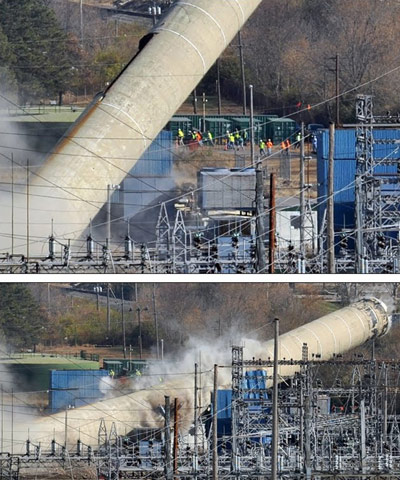 At this point, my animosity towards these lovely people is understandably questionable. Imploding a tower in the wrong direction doesn't exactly merit a fatality written by Homer. I understand accidents happen. Hey, sometimes physics can be a fickle mistress, but make no mistake, the Pisas deserve to die.

Throughout the video, an orange flag attached to one of the power lines is easily noticeable in the upper left corner. In the literary world, this is called foreshadowing. OSHA (Occupational Safety and Health Administration) didn't haphazardly choose orange as its official color for safety precaution. OSHA uses "Safety Orange"—yes that is the color's real name—because it's highly visible, especially when contrasted against a blue sky. If you watch the video again, you'll see that for once a government agency got something right: orange is pretty damn visible. 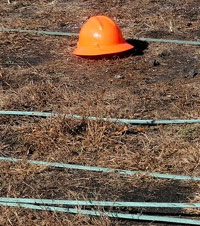 Orange you glad you wore your- uhoh…From here, the only proper conclusion is, as a unit, the Pisas knowingly ignored the flag's warning. Otherwise, Loizeaux Pisa, Head Blower-Upper, would have moved their position away from the power lines. I personally hold Loizeaux most responsible for the stupidity displayed in the video, as he seems to be the most well-equipped to lead this operation. After all, he meets the two requirements need to legally implode things:

To be clear, I'm not calling into question his professional expertise, only his common sense. And as de facto leader of not only his family but also the demolition job, his lack of foresight makes him first in line for the chopping block.

But as right as I believe I am, Charles Darwin would vehemently disagree with me. He would argue that although no one in the Pisa family qualifies as overwhelming strong, nor does this video showcase anyone Einsteinian in intelligence, they do meet his one qualification for survival: adaptation. As the tower begins its descent into a contradictory direction, the family recognizes their safe environment is on the verge of corruption. So the Pisas act on animalistic instinct and run like hell. As the video fades out and the family makes their exit, a lone orange flag, unscathed by the actions man, is left to warn future visitors against their own idiocy.