Charlie the Con Takes a Dive

Since this is most likely footage of a guy attempting suicide, I feel it's imperative to preface my article by saying that suicide is a tragic loss of life and is in no way funny. However, this guy didn't successfully kill himself, and in my jaded sense of morality, that makes him a perfectly acceptable target of jesting.

At first glance, you and I seem to have as much in common with Charlie as bioethics does with pickles. There he is, locked behind bars serving hard time for a crime he didn't commit; meanwhile, you're a lifetime away in a cubicle doing time for a career you didn't want. But realistically, he's not so different from us. Charlie, well, he's not a fan of mornings either.

In this perverted version of Choose Your Own Adventure, you can believe either of the following perspectives without fear for your figurative well-being. I assure you our new friend Charlie is the only one ever close to dying—literately.

Interpretation I: He's trying to kill himself. 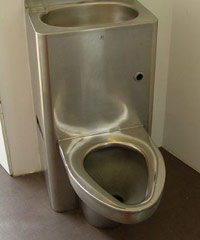 You'd be fed up with using your hand to wipe, too.Personally, I don't have the courage necessary to surprise party my loved ones in a room plastered with my cerebral confetti. Nor could I swallow enough pills to anesthetize a herd of water buffalo—I lack the throat capacity. Suffice to say, suicide requires a person of certain proportions; I believe—don't quote me on this—it's roughly two-thirds cup melancholy, half a tablespoon fearlessness, and just a pinch of wacko. Lucky for us, Charlie just so happened to have all the right ingredients.

I have a hypothesis regarding Charlie's distraught state, and it involves two guys, one cell. If stereotypes are half as informative as Wikipedia, I can only assume Charlie and his cellmate were the tightest of butt pluggers. Yet, nowhere in the video does Charlie's cellmate, whom I've generously given the name William, make a cameo. This raises a slightly irrelevant, yet very scholarly question: how do cellmates determine who gets which bed? Does one shyly whisper to the other, "Top or bottom?" In the dynamic world of inner-prison relationships, this question could be very misleading. It reminds me of my early school days when kids would ask each other, "Do you spit or swallow?" There's simply no wrong answer.

I don't blame him for wanting out of the clink. Poor Charlie isn't permitted to hang a single Justin Bieber poster. Outrageous!Speaking of no wrong answer, where the hell was Prince William of Jales? A plethora of explanations for William's disappearance could be at play: parole, transfer, or perhaps William taught Charlie how to do the swan dive the night before, but William didn't fudge the landing. I personally prefer the latter, but feel free to go with whatever reason gets your taint hardest. Ultimately, Charlie lost the queen of his heart.

Since Charlie no longer held the golden ticket to Willy's chocolate factory, Charlie needed something to sedate the aches of his broken heart. Following the likes of Robert Pastorelli and Elvis Presley, Charlie visited the only place available to drown away the sorrows of life: the porcelain pool. Unfortunately for Charlie, he didn't quite get the fix he wanted.

Perhaps the cop entering near the end of the video isn't exactly who he appears to be. Maybe, just maybe, he's William dressed as one-sixth of the Village People. What better way to spice up a monotonous sex life than a wee bit of role play? Take note where the guard leads Charlie: the bed. A little too far-fetched for you? I provide you with the classic "YMCA" and its first two lines: "Young man, there's no need to feel down / I said, young man, pick yourself off the ground."

Interpretation II: He's trying to escape via the poo pipes.

The bowels of prison, only accessible by aerial bowel movement.From the start of the video, Charlie is obviously mid-scheme. He's not exactly Dana Carvey in The Master of Disguise—a prodigious comedic mind in a regretfully disastrous movie. No worries though as Charlie doesn't wait long to spring to action and mount his bed, which I believe results from an undoubtedly impressive résumé of former mounting experience. I am relieved he takes time to study the intricacies of the forthcoming jump; I'm sure he hasn't really had an overabundance of spare time to consider all the possible outcomes of such a complex dive.

I don't blame him for wanting out of the clink. He lives in the equivalency of a walk-in closet, which is still more spacious than my freshman dorm room. I wasn't allowed to cover more than one-third of my room's walls, but poor Charlie isn't permitted to hang a single Justin Bieber poster. Outrageous! If there's one place I don't mind Bieber Fever spreading, it's amongst the homoerotic fantasies of the incarcerated.

As we progress towards Charlie's launch time, you'll notice Charlie takes to prairie dogging the edge of his bunk. My best presumption is a guard routes near his cell, and Charlie's attempting to remain inconspicuous. Smart move, guy. With the threat of detection receding, Charlie finalizes his footing, yet another deceivingly smart move on his part. According to a 2007 study done by the United States Diving Association, "improper foot placement during the initial phase of diving" is the fourth leading cause of diving-related injuries. Alright, that's total bullshit on my part, but were you really going to double-check a diving statistic?

With nothing left to lose and equipped with an Andy Dufresne state-of-mind, Charlie heaves himself from the upper reaches of his cell into a descending course towards freedom.

Okay, not so much. Charlie demonstrated a brilliant display of absolutely atrocious form. Honestly, Charlie looked more destined to belly-flop the commode than torpedoing through its plumbing. He spreads his legs, he separates his arms, and for Jehovah's sake, he doesn't even arch his back! The lack of vaulted ceilings doesn't help either, but I don't expect much from a prison that refuses to replace paper-thin blankets with the unwavering warmth of Snuggies.

Even though he screwed the gooch on the landing, his situation is still salvageable. He has a few options left, and so do you, the reader. If you didn't play Metal Gear Solid, skip to the conclusion.

Of course Charlie goes with numero uno. It's alright though; he drew the guard's attention anyway. Circle, circle, square, CIRCLE, CIRCLE, DO SOMETHING CHARLIE!

Charlie, seriously? Could you not bend over as soon as you catch a whiff of another man's pheromones?

Regardless of which interpretation you choose to believe, Charlie fails to accomplish his goal. Nonetheless, Charlie the Con's disheartening tale holds one positive note: you and I are not separated from people like Charlie by as much as we'd hope. Whether it's due to last night's boozapalooza, the work-week grind, or the Olympic dive from the top bunk, in the morning, everyone struggles to get up.