The Asians are Coming!

A list of hypothetical doomsday scenarios from the Orient.

It's recently come to my attention that North Korea is probably going to blow up the world pretty soon. And by the world, I mean America. Apparently it has something to do with some crazy fat guy with a bad haircut and a Disney fetish. Now I may not know much about global politics or hard news facts, but I do occasionally skim enough headlines to make uneducated, often childishly ignorant assumptions. I'd like to take a moment to share some of those with you.

So let's forget about the Chinamen in North Korea for a moment. What about the other Chinese countries? How dangerous are they? Are they our enemies? Well, let's examine some potential Asian invasions. 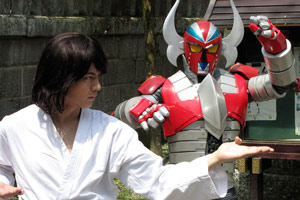 Japan is like our best friend that we used to beat up in middle school but now we like them because they make cars and computers. Japan could definitely kill us. I hope they do. It would be the coolest, kinkiest, most fucked up weird ass apocalypse in the history of the universe.

Think about it—50-foot tall anthropomorphic squirrels come stomping up out of the ocean Godzilla-style and start shitting bombs everywhere and shooting lasers out of their massive tits while singing an incomprehensible J-pop love song about a magic gumdrop and a talking fish. Also, ninja schoolgirls. With tentacles. And ass-chainsaws. Hell, they could sell us overpriced tickets to our own funerals with a show like that.

China is dangerous. For one thing, it's full of Chinese people. Hundreds of them. Possibly trillions. The Chinese have always been a wise and crafty lot, responsible for inventing things like math, noodles, bicycles, stringy mustaches, Chinese Checkers, rice, and heroin. There's no telling what would happen if they all banded together against us.

Personally I hope they don't launch a full scale invasion. I think that would be incredibly boring and unoriginal. I hope they send one guy. Like a Bruce Lee back from the motherfucking grave meets Chinese Hercules meets the Five Deadly Venoms starring in a Shaw Brothers kung fu holocaust covered in duck sauce. I think I'd be okay with that. 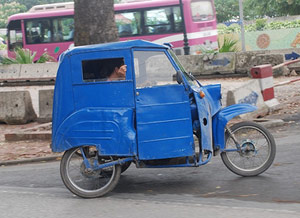 Vietnamese armored vehicle rolling into combat.Vietnam is bad news. Never trust people that don't like you, especially ones that go to war in their pajamas. Granted, we don't really hang out with those guys anymore so I'm not exactly sure what they've been up to for the past forty years or so. But what they're not doing is selling us cars. From that I can guess one of two things: one is they're just too dumb to make cars like Japan (who, incidentally, we bombed the shit out of, but you don't see them holding a grudge against us, do you?). Or two, they make the greatest cars in the world and we will never ever be allowed to have one.

That's pretty cold, Vietnam. Just for that, you can't watch our Hollywood movies… about Vietnam. Don't make us send Rambo back over there for another sequel. If you had any idea who that was, you'd be scared.

Thailand is like the Mexico of the Orient. It's terrifying. It's full of swarthy speed junkies and crime lords. In Bangkok, a tourist gets stabbed by a bipolar lady boy every 3.7 seconds. It's a fact, look it up.

I don't think Thailand would ever really attack us, though. I think we'd just all turn up missing one day. And maybe after a few weeks Canada would stop by to borrow money and they'd be like, hey, where is everybody? And there would just be this one shady looking Asian dude in sunglasses, and he'd just walk away whistling to himself with his hands in his pockets like he had nothing to do with it.

Shit man, I don't know. Which one has Gangnam style? And what the fuck does that even mean?

I know even less about Taiwan than I know about Gangnam style. Is it even a real country, or just some cheap sweatshop kingdom tucked away somewhere inside China's asshole?

I guess maybe the worst thing they could do to hurt us would be to sell us some exploding toys filled with broken glass. Which is pretty messed up. What the hell, Taiwan?! I'd expect something like that from Vietnam, but you? I don't even know who you are. If I had a map I'd find you and kick your sorry child-murdering asses for good. For America. And democracy. And other stuff. God stuff. Our god will kill the shit out of you.

I once knew this Laotian dude who owned a bar, and his wife made really fantastic egg rolls. That's seriously all I know about Laos. So as long as they don't start making poisoned egg rolls I've got no problem with them.

I'm not sure if India counts because nobody there looks Chinese. But I am afraid of this guy:

What, you think you guys are off the hook because you're American? Yeah, well I'm keeping my eye on you, buddy, so watch your back.

As for everyone else: Polynesia, Micronesia, the Philippines, and whatever the fuck else, well… congratulations, nobody cares about you. And I don't have any good jokes about you, so we're done.