Spaceships and LSD: a solid foundation for worship.

I'm kind of a smart ass. I suffer from a condition known as OSD, or Obsessive Sarcasm Disorder. One of the main symptoms of this disorder is that I often find myself incapable of responding to simple questions with straight answers. 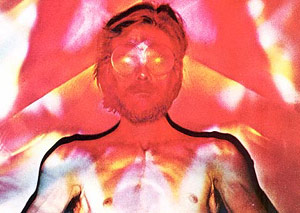 Facebook's current interpretation of my physical body.When I first joined Facebook, I had a severe OSD attack while setting up my biographical information. When asked to describe my religious beliefs, I simply typed the sentence, "It involves spaceships and LSD."

Now if I had typed something like Christian, Muslim, Atheist, or whatever, there would have been some nice category to put me in with other people who were also in the same demographic. Instead, I had to be an asshole. But Facebook was determined to understand my strange new religion that no one else seemed to have, so it invented this:

Once we've obtained enough members, we can fulfill my lifelong dream of starting a holy war with Jupiter.That is a community page under the classification of religion. That is a real thing now. Facebook does not like unlikable things, so it created this based on that one little sentence in my bio that didn't used to be a clickable, likable thing. Sometimes a sentence is just a sentence, and not a gateway advertisement. I understand that is a strange concept to some people. Such is the way of the internet.

But now that I've started a religion, or more likely a cult, I might as well get some followers. So feel free to click on that link and like it, denouncing all other gods before me, for I am the new prophet of IISAL. Here's what you need to know to get started:

I suppose I should write an official holy book at some point. In the meantime, study some ancient religious doctrines from various cultures while under the influence of cold medicine and children's amphetamines (they really do have the best). But just mentally turn all the angels into hyper-advanced grumpy astronauts, and every so often they look at the primitive Earth natives and say, "Stop writing down everything I'm saying, you have no idea what the fuck we're talking about."

Bonus points for hanging out in coffee shops reading Chariots of the Gods. I'm probably going to plagiarize most of that as the new IISAL Bible anyway, so you might as well start on it now. Don't worry, I'll add lots of mis-quotable Easter eggs for the fanatics in the group. Something to justify witch-burning or something. Preferably some random vulgar slurs stolen from rap lyrics. 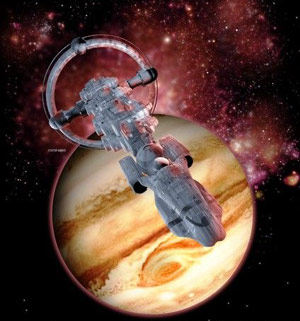 Jupiter Kickstarter Campaign: 4 backers, $317 pledged of $1.3 billion goal, 13 days to go.We'll need funding of course, for the spaceships and LSD to take us to Heaven's Gate. Maybe we could apply for government funding, or set up a Kickstarter campaign. Or we could just put up flyers around town. Once we've obtained enough members, we can fulfill my lifelong dream of starting a holy war with Jupiter. Wouldn't you like to invade Jupiter and rampage the shit out of it with righteous indignation? I know I would. Fuck Jupiter. Godless space heathens. We'll come at them wide eyed with laser guns and crazy hats, and they won't know what to do. So we beat the crap out of them until they join the Temple of IISAL and worship me.

Okay, Jupiter's a little ambitious. Plus there's probably nobody on it, which is going to make missionary work extremely unproductive. Maybe we should just start with something small like Pluto first and see how that goes. We just need gas money. And a ship. And some acid. And funny hats. Goddamn, I love a good cosmic crusade.

While you're at it, why not join my political party:

Related
Memo Regarding My Employment at Guilt-Centric Religion of My Childhood, Inc.
Kristen Alex
Times Are Tough, But We Still Have this Remarkable, Yet Surprisingly Affordable, 13″ Chef’s Knife
Stephen Sinisi
Self-Assessment: How Electable You Are for President Based on Your Religion
Lucie Frost
Man in 1888 Photo With a Metallica T-Shirt and Cell Phone is Not a Time Traveler
William Bryan Smith
Resources