Simple Recipes to Impress the Person You Want to Bang: Amuse Bouche

Better known to the lay person as "super awesome appetizers."

"The fuck is amuse bouche?" you may find yourself asking. As well you should, unless you're French, because it's a French term, and you would be really bad at French-ing if you couldn't French like that.

But let's assume that you're not French (because you're taking cooking advice from me, and as any French people who have seen me cooking can attest to…don't do that. My cooking advice has on more than one occasion led to an outbreak of scabies in northern Louisiana), and then we can go ahead and translate amuse bouche. It means "mouth amuser."

Amuse bouche names are usually terribly boring and/or self-loving, so I've given each of the following perfect names that should never be altered.Go ahead and try and pretend for a second that you didn't immediately decide to introduce your genitals to people as amuse bouche from now on, and then we can continue with the article.

But what is amuse bouche, really? Well, basically it's an appetizer. Except that it is exactly an appetizer. And anyone who says otherwise can be ignored with much hearty enthusiasm.

Traditionally, amuse bouche is a chef's specialty that's served before the actual meal in order to get the audience revved up for the gastronomic journey sure to follow. Which you will recognize as an "appetizer." So the only real thing that separates an amuse bouche from a pile of onion rings at TGI Fridays is about four layers of pretentiousness.

So in theory, amuse bouche can be anything. Fucking anything. So long as you get your ingredients from a place that gets mad when you ask where they keep their pork rinds, you're probably on the right track.

Since I've recently moved into an apartment that actually has a full-sized kitchen, I've been cooking up culinary experiences like there's no tomorrow (FDA Warning: If you eat too much of my culinary experiences, the resulting sicknesses may guarantee that you actually don't have a tomorrow), and I've decided to share a few of my favorite mouth pleasers with you. Three, to be exact, because that's the amount of them I've made in the last couple of weeks and these are the ones I can remember right now.

Please note that amuse bouche names are usually terribly boring and/or self-loving, so I've given each of the following perfect names that should never be altered. 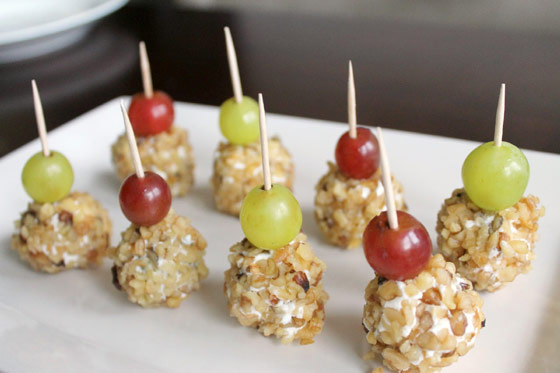 I decided to start off with the simplest one that I've tried so far, because I made some last night and there's still a few in the fridge, and coming up with orders for list-based articles is hard.

You really can fuck around with these in a few different ways, but at their base, Grape-Sexy Yum Bombs only really have three or four ingredients.

And those ingredients are:

Now, you can use any kind of nuts. Pine nuts, probably, if you want to go for that fancy look, but I like to go for some good old-fashioned "mixed nuts," because I like variety, and also, after I make my directorial debut in the adult film world, that will be the title of my magnum opus. But it's up to you.

There's a pair of ways to do this, and one of them is wrong. You can encase the entire grape in the cheese, but I find that especially with good quality goat cheese (that will have a more pronounced flavor), this is a little bit too strong, and makes you need to reach for something to drink much more often (and the fact that even when the only thing on the table is a bottle of wine, I still pair it with a bottle of wine, means that my dinner parties degrade into "Wooohoo, Spring Break!" territory pretty quickly), and that can lead to some problems.

So I would recommend molding a rectangle over it lengthwise. Like a really regrettable haircut. A haircut that you roll finely chopped nuts into. I'm bad at metaphors.

Anyhow, you can put these on crackers, or spear them with toothpicks, but either way you're going to need to stick them in the fridge for a little while so that the cheese hardens onto the grapes.

Serve to someone you need to impress really badly.

Okay, this one is a bit more wallet intensive, but most of the "work" involved really boils down to owning a passable food processor, so there's that.

Run down to a grocery store that doesn't have "Value," "Mart," "Savings," or "Seriously, Don't Get This At Walmart" in the name and pick up the following…

Okay, in all honesty, if you listened to me, then this recipe will be pretty easy. Listened to me in the sense that, your ingredients are of a sufficient quality. Again, you don't have to sneak into the back room of a five-star restaurant and swipe their shit, but you should at least go to like, Whole Foods or some shit, instead of Walmart.

So, if you've done that, then use a food processor to put together everything.

No, really, that's it. If it's not under the "For Plating" header, then grind that shit together.

Hey, I can't cook very well. You are taking cooking advice from a comedy website. I think we both knew we weren't signing on for anything particularly difficult when we started this article.

Now then. The next step is simple. Take your (essentially pâté) and put it on your baby spinach, lay three of these one side of the plate, put a dab of the raspberry jam in the middle, and then mirror your salmon/spinach leaves on the other side with the orange slices. And to answer your question, "Should we eat the other shit on the plate?" I answer, "I dunno. Sure?"

Seriously, the flavors do line up, but I guess it depends on you, your guests, and the atmosphere. I served it at an apartment complex called The Golden Nugget, so you go the fuck ahead and figure out if anyone there gave a shit about proper etiquette while gorging on the only homemade food they'd had since they drove away their girlfriends/substitute moms. 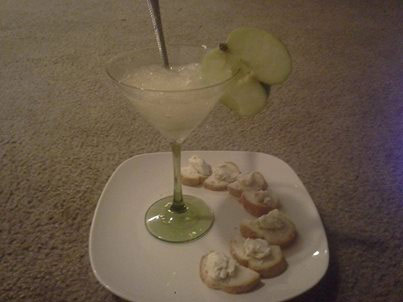 This stuff is actually called Granita. I don't know why, because "Champagne Slushie" sounds so much better. Like, 7-11 would have some serious problems on "Bring Your Own Container Day" if they advertised alcoholic champagne slushies. Like, transients trying to argue that since the hose they brought in with them feeds into a grain silo, and grain silos are containers, that they should be allowed to siphon however much they want out of those machines.

Or maybe that would just be me.

If I didn't know how to make it myself, that is. I only go to 7-11 to steal the dehydrated marshmallows they leave out for the coffee (pro tip: they taste almost exactly like Lucky Charms marshmallows—do with this information what you will).

This one is most likely the simplest on the list, but it actually takes pretty long to make unless you have access to liquid nitrogen. And if you do, you're probably too busy building a gun to shoot it out of while you make winter-based puns to use it on something as mundane as cooking.

Here's what you'll need, yo:

Cook together the water and the sugar until it comes to a boil. Then let cool. Pour your champagne in and then put it in the freezer. That's it. I mean, stir it every now and then with a fork or some shit, but otherwise, just wait until it's of a slushy consistency and then get brickfaced, but all classy like.

Oh, right, serving. I'd put this in like, a martini glass with an apple wedge as garnish. Maybe a Granny Smith apple ‘cause that bitch knows how to make some apples.

And honestly, it's nice to serve these with a separate amuse bouche. Two at once. I might recommend a pate on some crisped baguette bits, like this industrious/powerfully sexual person like the photo above.

There. It's just a start, but now that you know what phrase to Google, you should be able to spice up any dinner night that you've had the misfortune of being selected to host.

Make them mouth's water, yo.

All "Recipes to Impress the Person You Wanna Bang":

Related
How to Celebrate Christmas Without Letting Your Cousin Know You Want to Fuck
Sarah Vulpio
How Would You Rate Yourself as a Person From One to Chick-fil-A Employee?
Blake Dee
The Quarantine Cookbook: Easy Recipes for Your Favorite Staples
Dru Johnston
Resources