Brian: Hey Nate, how is it that you always have stories? Do you hire a writer to make this shit up for you?
Nate: No man, it’s just how I am. Do you want me to stop?
Brian: No, I just don’t understand where you get it from.
Geek: Nate can’t help it if he leads an interesting life.
Nate’s Dad: It’s because he’s too stupid to lead a boring one.

I tend to talk a lot. It can be really annoying, but what can I say? I have a lot to say, and I love hearing myself say it. I know I should listen more. Just believe me when I say I’m trying, guys, I’m really trying. Chances are if you see me, I’m either starting a story, in the middle of one, ending one, or in the process of creating another. So I figure I’ll save you some time, and cut to The Five Greatest Stories I’ve Ever Told.

These stories meet several criteria. First of all they are not “Had to be there” stories. They are genuinely funny and inspiring…or they involve a lot of sex. Secondly they are all alcohol-induced. And third of all, they are those which have withstood the test of time. I have told and retold each one to perfection, and now I pass them down to you like some kind of twisted folk tale in which the only moral is: Live life The Nate Way, and everything pans out.

5. Everyone has their drinking stories. I have thousands of them, and if you ever get me drunk, I’ll tell them all to you. But there was one night that puts every other night to shame. In fact, it is the one story which I cannot accurately tell, since I do not remember a single thing. If it weren’t for my friend’s accounts and my calendar, I would have sworn that that particular Saturday never existed. It started Friday night. I drank heavily…because that’s what I do, OKAY? The last thing I remember is counting down to midnight. I don’t know why, it was the middle of April. I must have exerted myself by the time I reached 1, because my friends say I passed out at exactly 12am. The next thing I knew, I was at church Sunday morning. I told you guys, I’m trying to be good. I don’t know how I got there. I was completely dressed up and everything. Apparently I spent all of Saturday in a drunken black-out haze. Yet I’m told I still moved and acted normal. To this day I celebrate the anniversary of Smashed-urday every year on April 28…by going out and drinking of course. 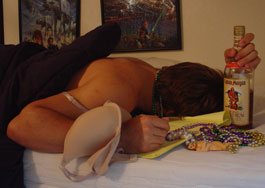 4. When people hear about how many women I’ve slept with, the question that always pops up is if I ever get tired of banging fling after meaningless fling. To be honest it does get monotonous, but every now and then someone comes along and rekindles the flickering flame that is my libido. None, however, compare to Hannah and the night of the Gateway City Fuck-Tour. The date started out gentle enough: picnic lunch in a downtown park. See, I can be romantic. But that moment lasted maybe 15 minutes until, as if on cue, we both couldn’t resist stripping down and doing the deed right there in public. After that I offered to walk her home, and she agreed, but it seemed like every 5 minutes we had to pull into some alley or parking lot and get it on. The girl was insatiable. The 20 minute walk to her apartment turned into a 12 hour sex romp all over the urban landscape of St. Louis. We saw all the major sights, and fucked on them. When it was all over we ended up at her place around midnight, but she just wouldn’t stop. One more go at it, and I passed out exhausted. The next morning I woke up alone in my bed. What! A DREAM!? But then I stirred awake from THAT dream, and realized I was indeed still in her bed, and she was still riding me as I slept. I fell back asleep and again awoke in my room, having vague memories of a cab ride involving backseat road head. Ever since that night Hannah has mysteriously disappeared, leaving nothing behind except the various landmarks we bumped uglies on, which I point out to my friends anytime I’m around the city.

3. I’m not going to lie to you and say I’ve never been to jail. It’s not because I have a thing against lying. I lie left and right, and a lot of times, it keeps my ass out of jail. I’m not going to hide my various trips to the slammer because I’d like to think I’ve moved past that, and because they also make me sound really badass. Back in the day, week, month, year, whatever, I was quite the jailbird. But of all the times I’ve been behind bars, nothing compares to the night I went to three separate slammers, all for the same offense, and still got off scot-free. The crime in question involved a certain contraband that I had stashed on me. A rival got sour over me stealing his clients, and ratted me out to the Five-Oh. The first police station nabbed me, took me in, and patted me down, but could not find a drop of evidence. They let me go. Only a few hours later, a different precinct decided they wanted a piece of the action. They held on to me for an hour, but when I didn’t utter a word, they too had to release me. I thought at this point I was done, but then one last rogue cop with something to prove pulled over and asked what I was doing out so late, I made a smart remark that got me once again hauled off in the cruiser, and then he noticed that I matched the description of the APB out for my arrest. I spent 9 long hours through the night in that cell while the fuzz bumbled around trying to figure out what they had even taken me in for. I knew they had nothing. In the morning I walked out of there with a smug grin on my face. All they had to do was reach down my back pocket.

2. Some of the wildest stories happen when you’re not even looking for trouble. As you know I spend a lot of time in bars and clubs, letting myself unwind. Yet, somehow things never stay as calm as I plan. Now there are rowdy bars everywhere, but something about me always seems to bring out the worst in people, like the time I was involved in back to back bar fights. I was enjoying a beer with a few friends while some ass at the bar was having an argument with his girlfriend. She started to storm out, when he yanked her by her arm back to him. At this point I couldn’t just sit and watch. I told him to release her. He asked me who the fuck I was, so I retorted, “Someone who knows how to treat a lady.” I told her to go, and when he reached out to pull her back, I grabbed his hand. Naturally a fight ensued that spread through the entire bar until it became a 20 person brawl. While I’ve never been a pretty boy, I came out of there looking like hell. After a rough day, I always like to cheer myself up with some fake breasts, so I headed down to the strip joint. To my surprise, I ran into little Miss Firestarter along the way. She thanked me, cooed over my wounds, and apologized for her boyfriend being such a tool. Although I knew better, I invited her to the strip club with me, and she accepted. So there we were, gazing upon pert breasts bouncing around in the soft glow of red and blue neon, discussing which stripper’s bodies she liked. Suddenly, her raging boyfriend came in, even more upset to see us together and in a strip club. I already had my fists balled. He came at me again, and I swiftly jabbed him. I don’t know what it is about fights, but every guy there, with testosterone fueled by their massive erections, started their own mini war, duking it out with anyone who so much as bumped into them. Pretty soon the bouncers had all thrown us out, and I looked and felt like the South during Reconstruction. All in all it was the roughest night of my life…and the girl still ended up spending the night afterwards.

1. Now, I don’t know if you remember the craziest night of your life. But mine was the day that I sat around with all my friends, and literally ran out of stuff to say. You wouldn’t believe it. I was on a roll. I nailed every word, cued every laugh perfectly. Over the course of the night, I ran through every story I knew. Around 5am that morning, after a long breathless laugh from the gang, I paused, and realized that I’d exhausted every single moment in my life. If any of us had been sober enough to write, I would have had my memoirs completed. I had nothing left—no more smug witticisms, no more tales of debauchery, not even a drunken ramble. It was uncanny, I sat there mouth agape with nothing to force out of it. My friend Geek began to worry, “Nate, what the hell is wrong with you. You ALWAYS have something cooking. Nate…I NEED YOU TO SAY SOMETHING…I’m addicted to your stories!” I knew right then that things were desperate, so I chugged the rest of my beer, and began to proposition what few ladies were left in the bar. No matter the outcome, I would be able to return to my friends, and inform them of the lavish details. But the women weren’t helping. Nothing outlandish happened, their responses were lackluster despite my obvious attempts to offend. My friends were sweating bullets waiting for more material from me, but I couldn’t come back empty handed. I ran out of that bar as fast as I could and went to bed with nightmares of the night. The next day, things returned to normal, because I then had the best story of all…this one.

So there you go, my best 5 stories ever. Some of them may surprise or offend you, but then again, you obviously haven’t met me. It’s just like my dad always said, “Nate knows better than to go on with his ridiculous lifestyle, but the stupid fuck actually enjoys it.”

More Like This
How to Lose 127 Million in Vegas Easily
Olena Medynska
What to Look for Before Getting Business Gas
Jacob Knowles
I Beseech Thee, Land-Lord, for Thy Forbearance with Rently Payments
Alex Connolly
Resources

They say true love is when you love someone else as much as yourself. I know I’m in love because I absolutely hate my girlfriend.