If you’re like me, you like to keep up with current events, especially in the realm of sports. Make no mistake, my articles, however, are anything but current. It’s a nice gig I have here, hitting it big with my first column, and then coasting ever since. It was fresh, original, had spunk and attitude, and of course covered the reigning pop culture topic of the day. Now I merely recycle the same therapy session tantrum for each new headline I read. Throw in a few jokes about the mentally handicapped, and you’ve got a column that offends half its readers, and pleases the oblivious mainstream college student.

But, this time I actually AM mad. Kobe is back doing endorsement deals, and personally I don’t think it’s fair. Don’t say I’ve gone soft, I couldn’t care less for that drunken gutter whore of a victim. I’m sick of women coming on to guys like coyotes in heat only to complain later when they get rammed like the slow cars in a demolition derby. We all know that she wanted to ride a star, but couldn’t get her grades up to become an astronaut. She wasn’t quite as elastic as she thought. Her own damn fault. Quit your bitching. 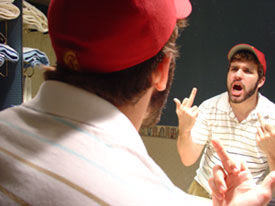 Sometimes I even argue with myself.

The reason I’m mad that Kobe’s getting his sponsors back is that he’s a prick and doesn’t deserve the status he has. First off, where’s my endorsement? A lousy Free Maxim and Stuff ad crammed into each of my genius rants? I say it’s time we stop allowing celebrities to fuck up without consequences. If I poked some girl in the two-hole, I’d be locked up and tossed in jail like my salad in jail by some huge black guy. If this world had any sense of justice, it would be Kobe in that cell with me, and I could use that story to get laid.

These fucking corporations are crawling back to Kobe like my fat ex-girlfriend when she heard I bought a dozen Krispy Kremes. When is America going to grow some cajones and start giving respect to the real athletes out there. You put some of the NBA-ers or NASCAR pansies on the hockey rink, and you’d have to name the team the Red Wings, because they’re all menstruating slutbags. Any sport that you can perform while getting a hummer doesn’t count.
At the very least, Kobe’s endorsement deals should be fitting to his new image. Fuck Nike or Gatorade. Everybody knows it’s not the shoes that make him good, it’s his skin color. Here are some sponsors that would make sense.

Trojan – All of Kobe’s troubles would never have happened if he had hid the evidence so to speak. You don’t rob a bank without wearing gloves. “The Kobe” would be lubricated, come in XL, and glow in the dark so you could see his black ass when the lights are out.

Xanga – I swear that Nancy-boy whines any time someone breathes on him. Maybe if he could vent his frustrations in his online diary, he wouldn’t have to waste our time by crying to the Ref.

Oreo – Black on the outside, white in the middle. Enough said. They could even have an OOPS Oreo, with cream splattered on the outside.

I’m not that well-known, but I think it’s about time I started seeing some of these celebrity benefits. First off, anyone offended by my column should be court ordered to lighten up and realize that I’m 250 pounds of attitude in a 140 pound body. Calling me “pathetic” is like calling Jessica Alba “cute”: underrated. Seriously, every offensive comment has been reused from a previous column, no use getting mad twice.

I should have an entourage follow me wherever I go. Among them I’ll need a personal bullet-taker for all you crazy feminist, douche-bag blow-hards that are no doubt plotting to kill me. I’ll want an intern that makes me fresh coffee and brings me the paper with all but the Sports and Entertainment sections thrown away. I’ll need a PR agent to apologize in my wake. A hot trophy girlfriend, with her own personal hot trophy stylist. She’ll also serve as my back-up trophy girlfriend in case the original catches a stray bullet or opens her mouth.

Lastly, I want a dollar every time someone rips off my column. Whether it’s a compound swear word I created, “Yankees Blow,” or “I need to get laid,” I’m constantly hearing people rip off my shit without giving me credit. I once heard a guy at the office practically quote one of my articles, and then yuk it up when the others thought it was funny. I can’t believe he thought he could make fun of the Oscars and not have me notice.

You ass-queers need to be more original.