I have a secret for you. I’m not that funny. In fact I’m so unfunny that some people laugh at my attempts. This paradoxically makes me funny. Sit back and munch your popcorn, folks. What I’m about to present to you is a show that rivals that of Siegfried and Roy, only with less man on man on tiger action and more on and on rambling action. I give you…the “Tribute to My Own Mediocrity!”

Don’t go anywhere because one of my lucky readers will win a prize package consisting of a Mary Kate and Ashley Book set, which finally makes it convenient that I only have one reader. Old Mrs. Littleton, come up and get your prize.

Where was I? Oh yes, let it be known that The Leech is good to his fans. I’d rather let them participate than impress them. And I know what you’re thinking.

“But, Leech How did you—” Ah, ah, ahh. It’s a long story how I got my nickname. Let’s just say that it happened at the office one day when Simonne was running copies. 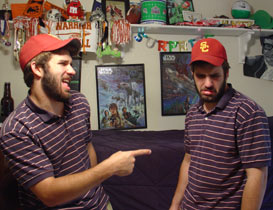 The humor of self-deprecation only works when people don't already pity you.

I don’t know what that was about, but anyways, they gave me that name because I’m always so BOLD and confident, just like a worm. Whatever…drink a few beers, and it’ll make sense.

I’ve been thinking lately about some important issues, and I’ve decided that government makes us miserable. Here’s my proof.

Where was I? Oh yes, changing my position on an issue from one vehement extreme to the other. I don’t care if it doesn’t make sense to you fans, ya’ll are a bunch of losers anyway. What can I say, when I’m right, I’m right.

I’m sorry kids, The Leech didn’t mean that, he just gets cranky after a long day…week…year with no tail. But if there’s one guy who knows how to fool himself into thinking he’s happy, it’s me. What you got to do is shrug off your failures and laud even your simplest achievements. Perfect example: I’ve already opened up a sixer to help me forget this column.

Another perfect example, I entered a contest with 15 other writers despite the fact that there's no way I can be funny on a weekly basis. But I won, and I made sure to celebrate that small win by submitting a directionless ramble of a column every week. Hey I won, it's my prerogative. If you have a better idea for a column, I'll gladly take it. I might not even ask. *Hello is this thing on?*

I still can’t believe that girl rejected me and then had her boyfriend rough me up. Maybe I should go homo, that seems to be the trendy thing these days.

Excuse me while I go fill out my application for Siegfried and Roy’s stage hand job… filed under J.