Part of the human condition is that of fallibility. This imperfection, although hindering, is also the impetus for the ever glorious pursuit of greatness. This ongoing struggle ultimately results in one of two outcomes: a triumphant victory over one's flaws or dumbfounded loss of pride when someone else points them out for you.

In other words, your ass got DENIED! Ranging from a potential employer frowning at your appearance or a blonde bombshell's poorly contained giggle after you make your move, rejection is a bitch. And that blonde is a bitch. She's really not that hot either, you don't know why you even went after her. You can do so much better. Look at her walking with her bitchy friends and their bitchy designer purses and bitchy small puppy bitches. You wonder if she needs a dog sitter.

So aside from feeble attempts at a productive summer, what are you going to do? You can clean up your act, give it your damnedest, and follow that American Dream! Or you can stay true to yourself, fuck the system, and rebel your way to the top. Either way that chick that just passed is smokin' and you could use a test of your new found confidence. Besides this one's brunette. It's a totally different story.

Like Romeo & Juliet to West Side Story different stories.

Actually those are pretty similar. 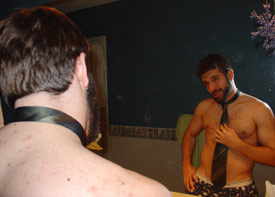 So you're sitting across from some managerial stiff. He makes a comment about your eyebrows being too bushy and eyes you suspiciously. Moments later he is mouth agape at the fact that you have no previous experience. You've got your little button-y shirt on with tie, trying to explain the catch-22 of needing experience to get experience. He smiles and says that he'll call, but you only fell for that last year… 11 times. On your way out you spot the dropout from your high school manning the register. He's got about 8 irate customers waiting. You know for a fact that he will single handedly put the place out of business. But he cleans up pretty nice when he takes all his piercings out, and his eyebrows are nicely trimmed. So you continue your job hunt.

Your endeavor at employment is made difficult by the fact that fuck-ups have learned to disguise themselves as normal hardworking people such as yourself. This is an adaptation known as camouflage. You are now guilty by association. Despite the rhetoric, in the process known as job-hunting, you are the prey. You're the one that is doing all the running around, you're the one dodging bullets about your intentions for working during the school year, and you're the one wishing you could go hang out by the river, watching all the female of your species bathe, and get the REAL summer hunt on if you know what I'm saying.

But you never got your lifeguard certification.

Now that summer is here, you should have plenty of opportunity to score, right? I mean the ball is in your court. All you gotta do is drive the lane, give it 110%, and hit her with your best shot. Maybe you're going to go for the slam, but perhaps a little more finesse will work. Finger-roll it in, baby. If you're not careful though, you'll end up playing with blue balls, which just look silly.

So you missed…horribly. It's okay, you can always go for the rebound. There was more than one girl at your high school, right? With all the gang back in your hometown, it shouldn't be too hard to get a nice pick-up game of tonsil hockey going. College has morphed you into a handsome, self-assured stud. Only problem is that somehow she became even more out of your league. Now she's playing hardball. She's a real ball-buster. Ouch, better get some ice for that swelling or else it will never go down. Rounding the bases is tough. Maybe you should consider scouting the minor leagues? This year's graduating class is looking ripe. No longer wearing spring-training bras now are they?

Still your game is a little rusty and you could use some good coaching. It's easy…just get low, wrap up, and drive your hips forward, you'll both be on the ground in no time. Whoops there's the flag, she's throwing an encroachment penalty. Time to run. Looks like you got shut-out, buddy, hit the showers. But hang your head high, you gave it your all. You were just a few inches short. Don't hate the player, hate the game… or the field… hate your equipment? By this point you probably just hate sports jokes… unless you're Justin, who is probably sportin' wood right now.

Here at Hard Way Inc. we may try to appear masculine and macho, but nobody's buying it, so we also acknowledge the opposing female view on many subjects. Perhaps they have valid reasons for turning us down. So ladies, I've compiled a list of responses that will be sure to get him off your back… or stomach. Personally I think that's a little too late in the process, however.

– We just want to grind each other and have all of you drool around us as you watch, thank you.
– A drink? Aww thanks! I'll have a glass of Shut the hell up.
– Do you work out? No? Yea I can tell.
– Just repeat whatever he says.
– Mirror in my pocket? No, hahaha. That would be my erect penis.
– Here's my number… Number of times I've heard that BEFORE!
– If I could rearrange the alphabet, I'd put J and K together, Because you HAVE to be kidding if you think I'm going to get with That!
– Aren't you Mike Faerber? … No it IS you! Hey Gretchen, that Points in Case guy is hitting on me.

Girl: So, why should we hire you?
Mike: Well, I'm an eager worker, ready to dive into anything not afraid to get WET. I'm willing to make a LONG term commitment. And I'm available nights, weekends, whenever. I'm not afraid of taking on some HARD shifts.
Girl: Well that's good to hear.
Mike: So, are you going to give me a JOB or what?
Girl: Are you hitting on me?
Mike: I'm just looking for some WORK…it, baby!
Girl: The answer is no…to both.

More Like This
How to Lose 127 Million in Vegas Easily
Olena Medynska
What to Look for Before Getting Business Gas
Jacob Knowles
I Beseech Thee, Land-Lord, for Thy Forbearance with Rently Payments
Alex Connolly
Resources

I try to be a good house guest, but I never know if I should leave the toilet seat up or down after I finish rummaging through the medicine cabinet.