(To all my Hard Way readers: I was unable to write a column this week, and Michelle, a friend of mine, has been bugging me to let her write something, so I agreed as long as she stayed true to the Hard Way format and style. Well here it is. -Mikey)

Well, gals, I made it! Aren't you proud of me? I finally convinced my friend Mikey to let me voice my opinion on Points In Case! It's my first issue of The Soft Way! HEHE! YAY! Well maybe in the future I'll be more organized, but today's topic is basically this: Getting Some Things Off My Chest… My cute, perky C-cup chest.

And the first of those things is creepy men at the nightclub, EWWW!

Anyways here's where it all went… whatever let's just get started! 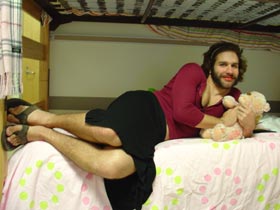 Are there any nice guys out there? I swear it's like I live in Sin City here. Seems like every guy is a hardened criminal with no sensitivity or has scars all over his face! Not to mention black and white color tone, HELLO? Get some color! Josh Hartnett is okay though, let's just say I'd still adore him if he was a 100 dpi grayscale image printed off the Internet… which is what I currently have of him posted on my wall… in the bathroom… next to my “electric toothbrush.” HEHEHE I can't believe I just said that on the Internet!

But seriously guys, ya'll need to play fair. Too many of my friends are getting screwed over (literally) because you lie to them. If we were playing Dating Monopoly, ya'll would be the ones stealing money from the bank, which is stupid because it's fake anyway… just like our orgasms. Guys quit being assholes and just be honest. Girls quit falling in love with the first guy who gets you a drink at a party. Wait for the 3rd or 4th! C'mon we're smarter than them. A little advice for the BOYS out there: women hate fakers, just act genuine and you will gain so much more respect from us. There's nothing more unattractive than a guy who puts on a ridiculous front.

So let us see that backside every once in a while.

I wish guys would take a moment to notice how much trouble we go through just to impress them. Actually that's not true, mostly we're trying to one-up that bitch in the slutty dress. But we do like to be noticed every once in a while. Would it hurt you to comment on our haircut the day after instead of three weeks later? Or start small: “Those are cute earrings… I like that necklace… That shirt shows the tops of your boobs.” We'll get what you're trying to say and the answer is NO, no sex behind the dumpster, tonight. Guys, I can't stress how much your words affect us. It's kinda pathetic I know, but then again so is your 4-inch wiener. Whoops. Jenny says I wasn't supposed to tell you she told me!

My point is this guys: Stop treating our clothes as just another barrier in the obstacle course of love. You have to have more respect for us than that. I'll put it in terms you understand. Women choose their clothes meticulously. They are like wrapping paper on a Christmas gift: tear them off to get to the box—wait no, I mean they're like petals of a flower: meant to attract visitors who suckle our sweet nectar—shit, this isn't working. Look, just give us the courtesy of noticing that our panties match the shirt which is now crumpled on the floor.

And now the bra, too? Wow you're a go-getter!

Now while women don't like to go unnoticed, we likewise don't want to be noticed too much if you know what I mean. I mean we don't want perverts drooling all over us… because that's gross, and creates hazardous slip zones when we're in our stilettos. Now I realize we sometimes wear hot clothing that makes you want us, that's the point. Shirts with breast windows, skirts that flip up in the wind… damn we are sexy. But c'mon guys have some dignity, we only do that because you don't notice when we cut our hair. Why can't guys be interested in us as people? We just want to find someone who we can talk to, who can share nothing moments and not be bored, someone can reveal to us the inside of their soul in much the same way we have revealed the outside of our bodies.

I guess I should give guys credit. The difference between romantically gazing into my eyes and disgustingly ogling my ladies is less than a foot. I would be much more lenient if it wasn't the first time a guy fell short by a couple of inches. I don't care if you make a quick fly-by. In fact that's kinda flattering, certainly perks my day up. But when he's locked on with his targeting computer and is making an attack run, I'm sorry pal, that's when I eject and you're flying solo for the night.

And don't think I'm letting you in the cockpit.

Related
An Open Letter to the Hermit Crab Who Made My Apartment His Shell While I Was Away
Keenan Novi
Child Labor Is Back, Baby! (Seriously, Are You a Baby? Because We’re Hiring)
Sarah Lehman
I Would Be the Best Writer in the World but Oops, My Pencil Broke
Audrey Clark
Resources