No, this isn't going to be another article bashing marriage or talking about how great being single is, because frankly I don't believe any of that crap and it's been done a thousand times before anyway.

Time and time again you hear some extremely vocal male spouting horse shit and making an overcompensated case about how great it is to be single and NOT tied down. These are always the same guys drowning their sorrows in alcohol every night and doing their best to convince everyone (but mostly themselves) what a great life they have. Fast forward a few decades and these are the same lonely slobs (with beer guts) still talking about their fabulous single lives, but also pining for a healthy relationship because they are tired of the whole tedious dating scene. My favorite is when these self-proclaimed ultra-bachelors later turn up MARRIED, because all this really proves is that they spent the better part of the last decade completely full of shit. 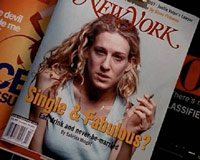 Eat, drink and never-be-married…Then there's the other side of the gender coin—the self-proclaimed "fun girls" who pride themselves on being sexy, single, and fabulous. Let me tell you something people, any woman who has to tell other people that she's a "fun girl" is the exact opposite of an "actual" fun girl. When a girl tells me that, all that means to me is that she has some serious self-esteem issues which she thinks heavy amounts of alcohol and chain smoking will cure. That's right, Carry Bradshaw, I'm looking right at you.

Open Sesame!Look around, most people over a certain age are married and there's a good reason for that: being single sucks and everyone knows it on some base level whether they are willing to admit it or not. In fact a recent study also dispelled the "no sex after marriage" myth once and for all and reported that married people were actually having MORE sex than single people! What boggled people's minds even more was that married people WITH CHILDREN were having more sex than single people too! So ladies and gentlemen, next time you come across that commitment-phobic male, or that "fun girl," do yourself a favor and move on instead of getting hate fucked for months or years at a time and then left with nothing but bad memories, self-esteem issues, and a severe substance abuse problem. The reason all the "good ones" are taken is because you keep wasting your time with obvious losers and LETTING all the "good ones" get taken by the smarter, open-minded people, who ironically are having more sex than you right now!

So now that I've lost every single reader at Points in Case, let's bring them all back and talk about what I really wanted to write about. (Don't you just love the double meaning of "single" in that last sentence? Go ahead, read it again, it's gold!) What I really wanted to talk about in this article was FARTS! YES, FARTS! I know, I'm so very mature, but this is apparently a serious issue today in relationships everywhere. 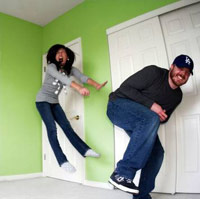 This is NOT what she meant by sweeping her off her feet!Gentlemen, please, do you know how many of my female friends complain about your ghastly farts to me? I wish I had a nickel for every woman who's ever said, "I just wish he wouldn't fart so much in my presence." What the fuck are you guys doing letting several rip during date/movie night or under the covers before bed? Do you think that just because you're in a relationship that you get to lose all sense of respect and common decency for the woman you're with? A pretty good rule is that if you didn't do something while you were dating then you probably shouldn't do it now that you are "together," whether you're married, engaged, or just in a monogamous long-term relationship! The flip side of that is a good rule as well—as in, you also shouldn't STOP doing any of the nice romantic things you did while you were dating, now that you're married, engaged, or just in a monogamous long-term relationship. Trouser coughing all the time in her presence constitutes a breach of this rule on both accounts in my opinion!

There is no free pass for blowing the butt trumpet, period! I don't care if you ate Chipotle for an entire week straight and then ate the ENTIRE STAFF of Chipotle with some fava beans and a nice chianti. There is absolutely no reason you can't get up and go airbrush your boxers somewhere in private, away from other people's noses. Oh and don't give me that gastrointestinal, acid reflux or whatever other lame ass excuse you come up with. If you had diarrhea, you wouldn't shit yourself because you were too lazy to get up, but that's exactly what it smells like to your woman when you fire a stink torpedo under the covers before bed! I know because she tells me all about what a disgusting foul animal you are and that it makes her want to throw up in her mouth a little just thinking about you inside of her, after you go insane in the methane. Frankly, it flabbergasts me that she lets you touch her at all!

Okay, maybe there are two women who may like it, but that is ALL.It blows me away that women put up with this in general, but what is even more amazing is that men often complain about not getting enough sex! Hmmm, here's a real brain child for you guys: try not making the bedroom smell like a fucking toilet every half hour and your chances of getting laid that night will increase astronomically! Not once has a woman ever uttered the words, "Oh baby, the smell of the rancid shit sitting in your colon makes me want you SO BAD! I must have you, RIGHT NOW!" So guys, just get up off your lazy ass and perform your anal tremors somewhere else and maybe you'll get some tonight! 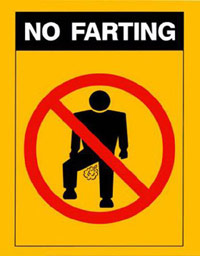 Unless of course you don't want to have sex with your girl tonight.Here's another little tip: Since most women in relationships complain about their man's butt percussions around them, just how much more appreciative is your woman going to be toward you, when she hears all her girlfriends complaining about something you AREN'T doing?! Women are very supportive of each other and when one girlfriend complains to another, the listener has only a few appropriate responses available to her: either she reciprocates with a similar story to show her friend support by demonstrating that she isn't alone, OR she just mutters affirming, understanding statements, while biting her own tongue, because she isn't actually experiencing the same thing. In the latter case, secretly, the listener really wants to scream at the top of her lungs, "THANK GOD THAT'S NOT ACTUALLY HAPPENING TO ME!!!" Since women are very smart, they quickly realize that God had nothing to do with it and all that gratitude is instantly shifted to the appropriate party—in this case, YOU! 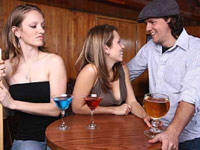 Flirting With Disaster: Something sure stinks here, but this time it isn't only his ass that's the issue.Look, I'm not saying that nobody rectal salutes or that it wouldn't be totally convenient to just shoot the cannon without anyone there to smell it. The issue here is that THERE IS someone there to smell it, and it's someone you're supposed to actually care about. More importantly, it's someone you actually want to have sex with tonight, right?! When a man continues engaging the retro-rocket indiscriminately AFTER a woman has voiced her dislike, then the man is sending a very clear message to the woman: "I have no respect for you and don't care if you think I'm gross or not." Women aren't stupid, they know FOR A FACT that when the hot little flirty girl in the black miniskirt or low cut top is in the room at whatever social event the two of you are attending, you aren't sounding the sphincter scale throughout the room for all to hear while exclaiming with glee, "WOW, that was a potent one!" Your significant other can put two and two together pretty quickly and realize that you care what "THAT" girl thinks about you, but not what SHE thinks about you, leaving her feeling a lot like an "insignificant" other. In this case, two and two quickly equals FORGET IT! You ain't gettin' NONE tonight!

Ladies, I'm not here just to complain about all your disgusting, foul smelling, fart bombing men and the fact that I'm tired of hearing about their potent emissions. No, I'm here to be supportive, helpful, and to provide not only comic relief for your stinky plight, but some olfactory relief too. I don't know why you decided to be in a relationship with a leaky sulfur mine and frankly I don't care, but I didn't marry the guy, so I certainly don't want to hear about his assgastic events any more than you do. 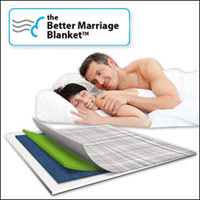 "It makes a great wedding gift or anniversary gift too!"So here you go ladies, the solution to all your problems: The Better Marriage Blanket! I mean, just look at the satisfied expression on the face of the woman in the video. Oh and please beware, I am NOT above giving this as a wedding or anniversary gift if you keep telling me all about how your guy's ass smells! You were the one who wanted that ridiculous man even after I told you what an immature little boy he was, and I am a firm believer that if you make your bed that you should at least be able to lay in it too!

More Like This
Banning Me from Game Night Is Nothing Short of an Orwellian Nightmare
Ryan Ciecwisz
Well, Gang, We Completely Failed to Save the Rec Center
Lucas Gardner
6 Hobbies Every Student Should Try Out
Gilfred Helmonsen
Resources