The Joy of Santa Casey

A few days before Christmas last year, I received a call from Sunny, my kindergarten boss. I dreaded answering the phone when she called because I always knew she was going to ask me to work. Even with this knowledge, I took her call. We quickly exchanged some greetings and then she dropped the bomb on me: "Would you like to work this Monday?"

"They think you are the real Santa Claus," Sunny laughed. "They have never seen a white Santa before!"Koreans treat Christmas more like Valentine's Day, so Christmas Eve doesn't really matter to them, but I always remember being a kid, enjoying looking at the tree, going to church with my mom at night, and then unwrapping only one present before bedtime. Christmas Eve ranks up there with Christmas Day for me.

"I know it is Christmas Eve," (Sunny uses proper English and always sounds like she's in a hurry to blurt out everything she needs to say as fast as possible) "but you would be going to kindergarten dressed as Santa Claus."

Why? I wasn't really sure, but I remember last year watching one of the kindergarten's bus drivers dress up as Santa and it just looked so fun. He talked, laughed, and played with the kids while I just felt jealous.

I asked if I needed a suit, but she told me she owns one.

Monday morning I grabbed my red sweatshirt I use for my Super Mario Halloween costume and the Santa hat Sue made me for last Christmas. I didn't see the point of shaving so I didn't. I waited for Sunny to pick me up and jumped in her car as we took off.

"Thank you so much for doing this for me. I think you will be a perfect Santa, Har-uh-ah-buh-gee."

"Oh, that means ‘Santa Grandfather.' That is what we call him in Korea."

We arrived at the kindergarten I worked in for a few months in the really nice suburb of Bundang. The principal, vice principal, or whoever, came to greet me with a giant smile. I put on the Santa suit and was glad I brought my own hat because the one matching the suit looked really crappy. Actually, the entire suit appeared to cost maybe five bucks. The beard didn't cover my face, the cloth seemed to be made of felt and the suit was one-size-fits all so it was lumpy in a lot of weird places. I looked at myself in the mirror, rolled my eyes and thought, "Well, they're only kindergarten kids."

When I stepped outside Sunny and the vice principal clapped their hands then begged me to snap photos with them. I cocked an eyebrow and said, "Really?"

"Oh my goodness you look just like Santa!" Sunny cried. I took about five photos with the two of them, and then another teacher wanted more photos. And then a different teacher. And then the cook. 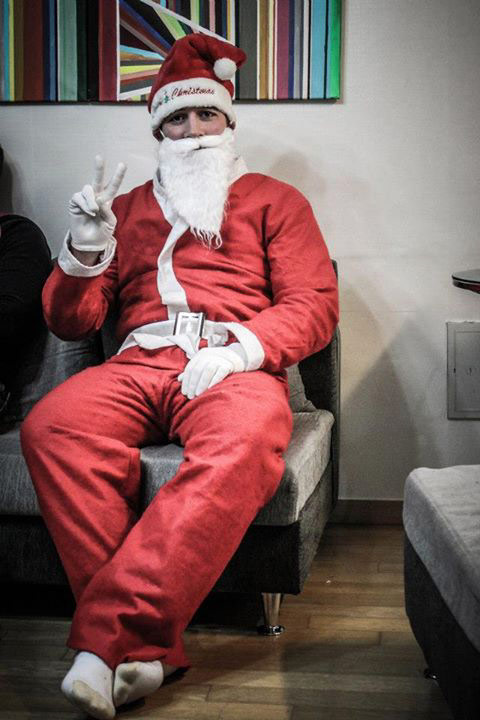 Finally, I walked into a classroom. I didn't recognize any of the kids, but they recognized me… as Santa. The kids jumped, screamed, sang, and grabbed me.

"They think you are the real Santa Claus," Sunny laughed. "They have never seen a white Santa before!"

Wow. That's heavy. I guess I didn't think of that, but my Grinch heart grew three sizes.

The kids lined up and listened when I told them to stand nicely and quietly. They sat on my lap and answered a few questions like, "What is your name?" "How old are you?" and "What would you like for Christmas?" When every kid enjoyed his chance on my lap I picked a few of them up. The whole time teachers snapped pictures. Afterwards I told the kids, "Ho ho ho! Practice your English, do your homework, listen to your parents, and be nice to your teachers! Ho ho ho!"

As the first class finished I took a breather. This was probably the most fun I'd ever had teaching. Maybe even being sober. I looked at myself in the mirror and didn't see a crappily-suited Santa, but the delight in the little kids' eyes. A hand snatched me away from my reflection.

I nearly threw my back out throwing each little twerp up in the air, and I could feel my voice growing hoarse from all the "Ho Ho Ho-ing."

I did another few classes and then Sunny asked, "Do you have any glasses?"

"Shoot. The next class you teach they will remember you. We need to cover your eyes or they will recognize you."

"Oh, there are sunglasses in my bag. Let me grab them." Keeping a spare set of shades never came in more handy. So now I wasn't just Santa, but the coolest Santa with sunglasses.

I recalled a few of my old students, and even fewer of their names. They loved me just as much as all the others. I repeated my demand that they study hard, listen to their parents, and be nice to their teachers. The kids went wild. And I took another few hundred photos.

I finished up my time and asked Sunny if she could drive me to Yeowan Kids so I could spend some time with my little prides and joys. She beamed and we took off. As we drove I pulled cottony stuff off my five o'clock shadow and relished my time as Old Saint Nick. Soon enough, I did it again.

The Yeowan Kids recognized me, but still jumped for jolly joy. I snapped another ton of photos with the teachers, students, and cook. As magical as the experience must have been for them, it was even more so for me.

I finished up, loaded some photos onto Facebook, and ate with the Yeowan crew. Everybody smiled and seemed to want to pat me on the back.

As I stuffed my Santa suit in the bag I thought, "If I'm the only white Santa these people have ever seen, could I be a professional mall Santa? Could I deliver presents to people's houses? How could I make money off of this? If I bought a decent suit, I could make a ton of money off of this!"

I called Rob: "Hey, are you staying at your uncle's and aunt's?" He said yes. "Would you like me to stop over dressed as Santa?"

"Sunny Teacher had me be Santa at this kindergarten and the kids went bananas. I have this suit with nothing to do tonight and I thought it would be fun to pay a visit to your uncle's dressed as Santa."

"That would be awesome."

I called Gene and asked the same thing and he thought it would be a grand idea as well.

Rob's and Gene's families both lived relatively close to each other. I showered and packed and shot out to Rob's uncle's place first. I hadn't been to the area since my friend Brooke left.

Eventually Rob's uncle picked me up. We chatted a little bit. He told me his two children's names and what they liked. I dressed in the hallway and when I entered, the youngsters gawked at me. "Oh my goodness! The real Santa Claus!" They didn't actually say that, but I could tell they were thinking it.

I told them that they should do their homework, listen to their parents and teachers, and always be nice to their friends. I "ho ho ho-ed" quite a bit too.

They offered to feed me, and I took a few bites for the road to Gene's. Rob's uncle said, "Originally, I thought this was really stupid, but my kids had so much fun. Thank you so much. That really changed their feelings and moods. Do you want any money for this?"

"Oh no. I couldn't take your money. You gave me some food and your kids are happy and you drove me around town. Just have a merry Christmas I guess."

I redid everything with Gene and his little cousins. Again, the little ones watched me and were mesmerized. I blurted "Ho Ho Ho" another hundred times or so and Gene turned to his Aunt, "Well, he sure is jolly."

After that session ended and Gene's cousins were instructed to listen to their elders, study hard, and be kind, Gene's uncle asked me how much I wanted. I declined but he gave me some Christmas cake stuff anyway.

As I left to walk to the subway Gene stopped me. "Cheers, mate. That was incredible. What can I do for you?"

"Just buy me a Guinness tomorrow when we go out."

"That's what I will charge next year. I'm going to make a business out of this, and make a shitload of money."

In the end, the happiness I saw in these kids honestly warmed my heart. I'm still smiling right now writing about it months later. Buying Coke for kids after soccer, hugging, singing with them and everything under the sun is fun, but absolutely nothing compared to being Santa.