With the NBA and NHL season drawing to a close, I have to find something new to watch; and no, I'm not going to watch baseball—I'd rather watch a live feed of the oil leak for three hours. Fortunately, this year is special, because the World Cup is here. I'm not sure if you've heard, probably due to the vuvuzelas droning out all other noise in the area.

Normally, when people criticize soccer, they say that the games are too slow and not enough goals are scored, and boy has this World Cup proven those critics right. Most games have ended in draws or 1-0 victories, with the exception of Germany slaughtering Australia. I haven't seen a team of Germans massacre a group of people like that since… actually, I'll leave that one alone.

Hey North Korea, your mother is a whore and your house smells like cabbage!

If you happen to find yourself at a soccer pub, remember that a well-timed racial slur can make you the funniest guy in the room, but if the wrong person hears you, you'll be falling down faster than Ronaldo on a fast break (EYYOO!!). If you're confused about who to cheer against, it's normally a safe bet to pick on North Korea. There's a 99% chance that there is nobody in that room from North Korea. Hell, I don't think they get the Internet there, so you could say anything you wanted and they wouldn't know. Hey North Korea, your mother is a whore and your house smells like cabbage! 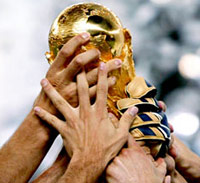 "It's mine!"
"No, it's MINE!!"
"You didn't pass me any balls last game, IT'S MINE!!!"
"Gentlemen, gentlemen, relax, everyone will get a turn with the anal bead."As a person living in Canada, I was on the fence about who to support. Technically, we are still ruled by the Queen of England, so that would be the most patriotic choice. But then again, after that game against the U.S., I might have to cheer for Canada's chair. Could you imagine what would happen if the USA won the World Cup? It would be chaos. You beat the whole world at its own sport. You don't even like soccer. Go ahead and claim that the NBA or NFL or the NHL is better than soccer, you would never have to listen to anyone tell you how it's the superior sport again. I think if America wins the World Cup they should go ahead and start calling it "soccer" in Europe for the next four years—no more of this "futbol" nonsense.

With all that being said, you really have to respect this game. What other sport can bring together the impoverished nations of the world and pit them against the rich ones? What other game has the highest possibility of David taking down Goliath? What other sport can white guys get ideas for haircuts from? Even though I'll probably never watch another game of soccer again for the next four years, the stuff I'm seeing now is decent. Now all they need is more flash color commentary, some half-time shows, a t-shirt cannon, a Sprite "Kick Your Thirst"-style contest, and an outrageous mascot. Oh, and get rid of those damn vuvuzelas. Or just send them to campuses across America and let everyone make World Cup funnels out of them. It's like you're at the game!!